Owning a teddy bear is like a rite of passage for most kids and for adults, it’s usually a cute reminder of their childhood. While most toys are expected to move or talk, teddy bears are simply for hugging and are some of the most loved traditional toys around the world.

An interesting, but not so well-known fact, the teddy bears were named after USA president Theodore Roosevelt. It all started with a hunting incident in Mississippi, in November 1902, when the President refused to shoot an American black bear that was tied to a tree. This became a political cartoon and inspired a Brooklyn store owner, Morris Michtom, to create a stuffed bear, which he named Teddy’s bear.

Today, there are many different teddy bears to choose from, from species, including black bears, grizzly bears, pandas and more, to brands and materials used. When it comes to the UK, there is one brand of teddy bears that has remained a constant for decades – the Merrythought teddy bears. The company was born in 1930 and is the last remaining British teddy bear factory, making history until this day.

Handmade Perfection: How the Merrythought Teddies Are Created 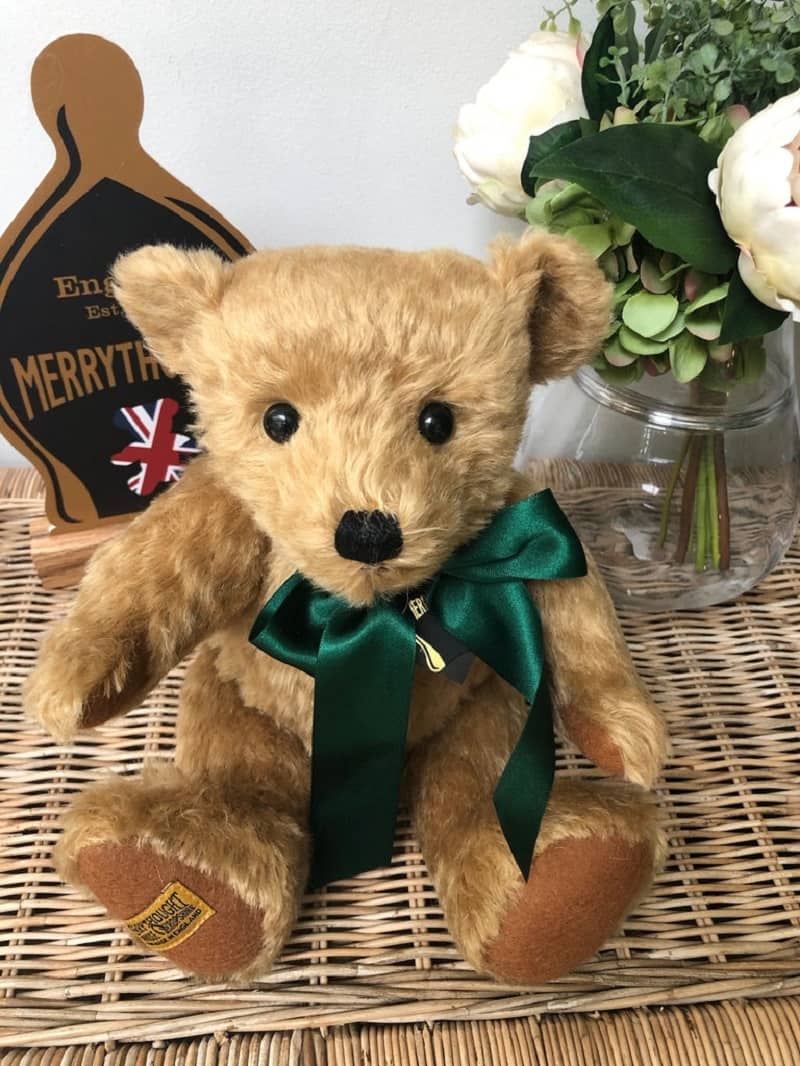 Merrythought was established in Ironbridge, Shropshire, by two spinning mill owners W.G. Holmes and G.H. Laxton. Today it remains a 5th generation run company that has been making some of Britain’s finest soft toys. You can find a selection of Merrythought teddy bears at most well-stocked gift stores and choose a baby gift, a toddler gift, or a Valentine’s or a Christmas surprise for a dear person in your life.

Merrythought specialises in beautiful handmade teddies made from the finest materials. with no compromise on the quality of its products. Keeping the teddy making process almost the same for so many years, the company overcame some tough times and competition.

A Merrythought teddy has an exquisite design and is made using high-quality fabrics such as mohair (from the angora goat) and alpaca plush. Each teddy bear is made from scratch in a 15-step process that begins with cutting out the mohair into body parts. After this, all the parts are sewn together, the eyes are added and lastly, the limbs are stuffed and jointed.

The next step is where the limbs are attached to the body and then it’s stuffed and sewn up. In the end, the teddy bear is finished with a carefully embroidered nose and smile and no two teddy bears are identical. Their smiles give them individuality and charm and make each teddy bear look so special.

When it’s all done, the teddy bear is brushed, combed and trimmed and a ribbon or accessory is added as a final touch. The whole process is delicate and labour-intensive and it’s carried out by highly-skilled specialists. It’s not a surprise that Merrythought teddies have become a collector’s gem and are produced in limited editions, especially for the Japanese market.

The Most Popular Merrythought Teddy Bears 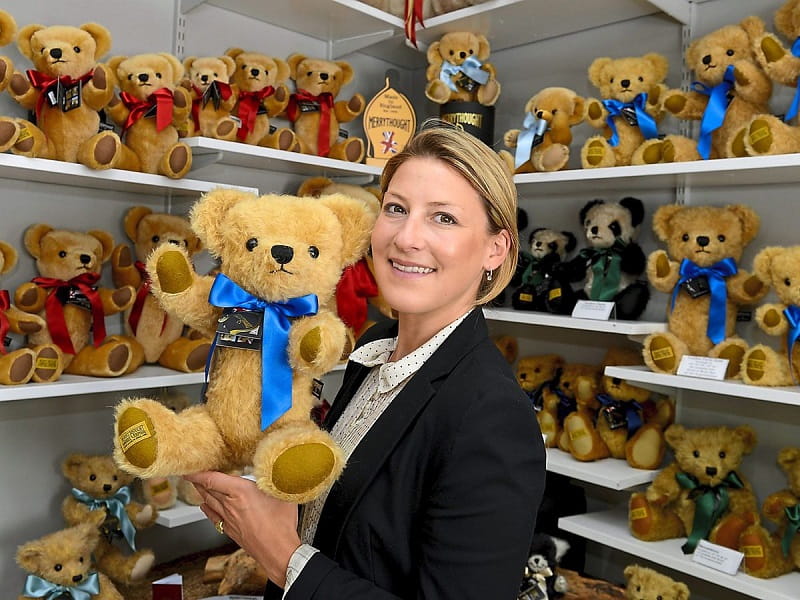 The first company’s catalogue was designed by Florence Atwood. She designed 32 toys, including the iconic Punkinhead, known as well as Punkie Bear, which was one of her last designs and a popular bear that Merrythought collectors truly appreciate and love.

Bingie was one of the first Merrythought’s bear creations. In 1931, workers from the Chad Valley company, such as the abovementioned Florence Atwood and others, were working with Merrythought. That’s why Bingie was reminiscent of the Chad valley cub bears that were popular at the time. Bingie is a sitting bear with a centre head seam and unjointed legs. It was available in seven different sizes.

They were given this name thanks to their wide grin. The Cheeky bears first appeared in 1956. They feature large oval ears placed down on the side of the head, a large bulbous head, a potbelly and a short muzzle.

Teddie bears have been children’s favourite toys for centuries and so many of them have littered fiction, in books and on-screen, and they still remain the one gift that you can’t go wrong with. Even though we live in a digital era, where kids play games on their iPads or smartphones, when it comes to toys, the teddy bear still remains one the top of the list.

Merrythought teddies are not only a symbol of love and care but also tradition and heritage. The name comes from an old word that means a wishbone and in the old traditions, it was often considered a good luck symbol. Therefore, the company’s logo remains a wishbone to this day.

The company has expanded the range of animals included, such as a dog named Digby, a cat named Coco Cat, then Milo the Monkey, Freddie the Fox and more. 2012 was the year when Merrythought created the official Olympic bear and after this success, they were commissioned by the Royal Collection and created limited-edition bears to mark the days when Prince George and Princess Charlotte were born.

In 2013, the Herdy Company decided to create a special soft toy Herdy. They wanted it to be special, made with high standards of quality and craftsmanship, and British made as well. And there was no better choice than Merrythought, the oldest British teddy bear maker, based in Shropshire, the home of the Industrial Revolution, now a World Heritage site.

That’s how the limited edition My Herdy was created in 2014 and it was launched with only 250 pieces. Later on, in 2015 My Herdy Lamb was launched, with 250 pieces as well that quickly found their new homes. Then, to round off My Herdy family, My Herdy Tup was created, with his lovely curled horns. Additionally, the My Herdy collectables were launched, as well as My Herdy Shearling and many more.

Even today, Merrythought still uses the same building it first occupied and is operating from there. Merrythought sisters run this heritage driven company successfully, reinforcing the brand’s dedication to the family-run history, where Sarah acts as sales director, Hannah acts as operations director and the youngest one, Sophie, as marketing and social media director.