A few weeks ago I wrote about our wonderful trip to Thailand and Malaysia back in 2013 and my good friend Nicola shared her experiences of Vietnam a week or so after. This week, after reading Chill Insurance‘s eBook about cultural drives around Ireland, I was inspired to write about our ‘cultural’ [read beer sampling and food eating holiday with a few castles and cathedrals thrown in!] road trip around France a few years ago.

In August 2015, before Dexter was even conceived, we packed up our tiny little Volkswagen Fox and set off on the open road with only our ferry tickets over to France booked.

We live pretty far north so the journey down to Dover was really long. We broke it up by stopping off in Surrey for a couple of nights to visit my sister-in-law and her family, before trying to negotiate Operation Stack.

We got a ferry over to Calais at around 4pm and the journey took less than an hour. We parked the vehicle in the depths of the ferry, before climbing up to the top deck and enjoying the feel of the sea breeze and warm sun on our faces.

I was really scared about driving off the ferry and onto the ‘wrong’ side of the road, however the traffic was so much calmer than it had been in Britain and it felt completely natural. We looked for a cheap hotel nearby and decided on stopping overnight just outside of Lens in a motel style room called B&B Hotel Lens Noyelles-Godault. After a good night’s sleep, we set off again on the open road, having no idea where we were heading.

After three hours of driving, we settled on a little town called Aix-en-Othe which is in the Champagne-Ardennes region. We settled on a gorgeous hotel called Auberge De La Scierie which came with an onsite restaurant, a pool and gorgeous ensuite rooms. 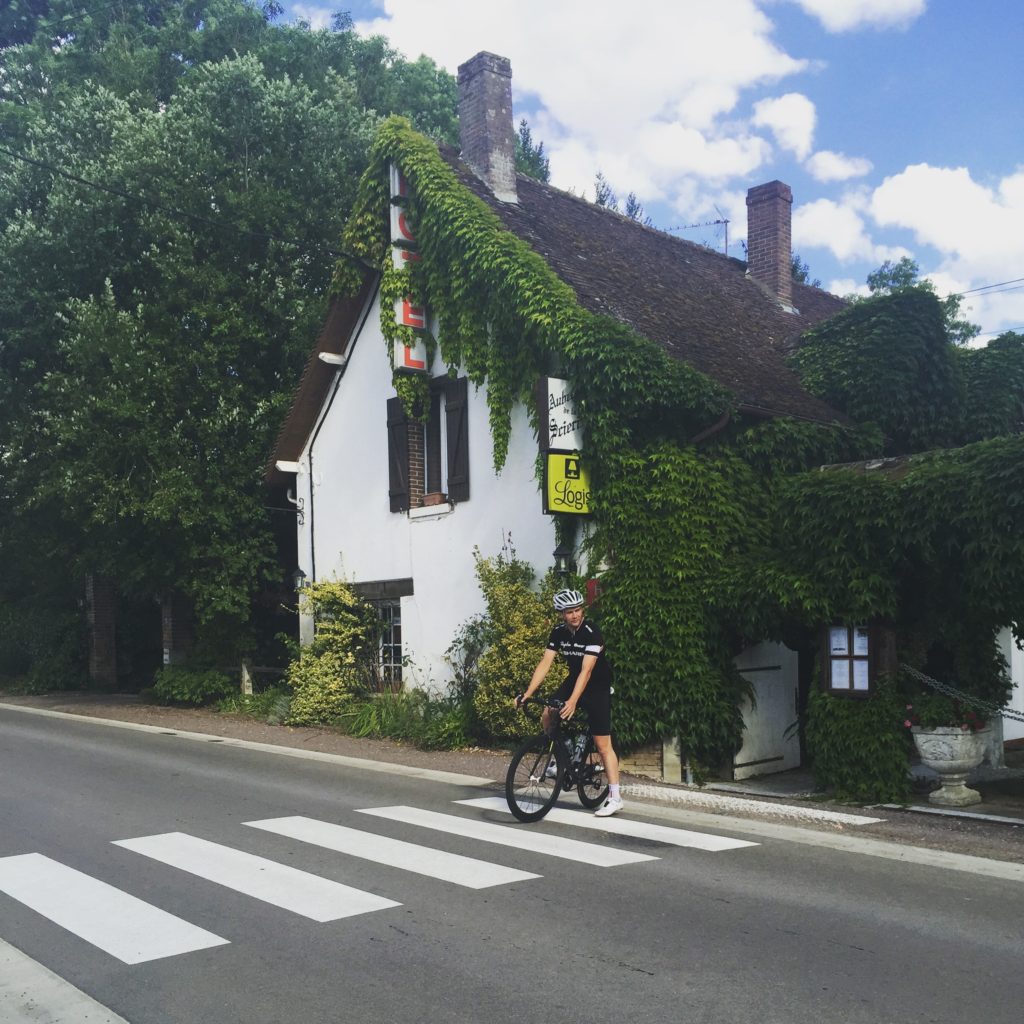 We spent a couple of nights in Aix-en-Othe, enjoying the slow paced way of life in the small town. We enjoyed hanging out in the local bar sipping on beers and stocking up on baguettes, cheese and fresh fruit at the local supermarché.

It was soon time to move further south and our next stop was Beaune. We spent an afternoon exploring the old town and lunched on croque monsieurs and red wine. That night we stayed in a beautiful old mill called Le Moulin d’Hauterive and dined in their restaurant sampling frogs legs, snails and steak. 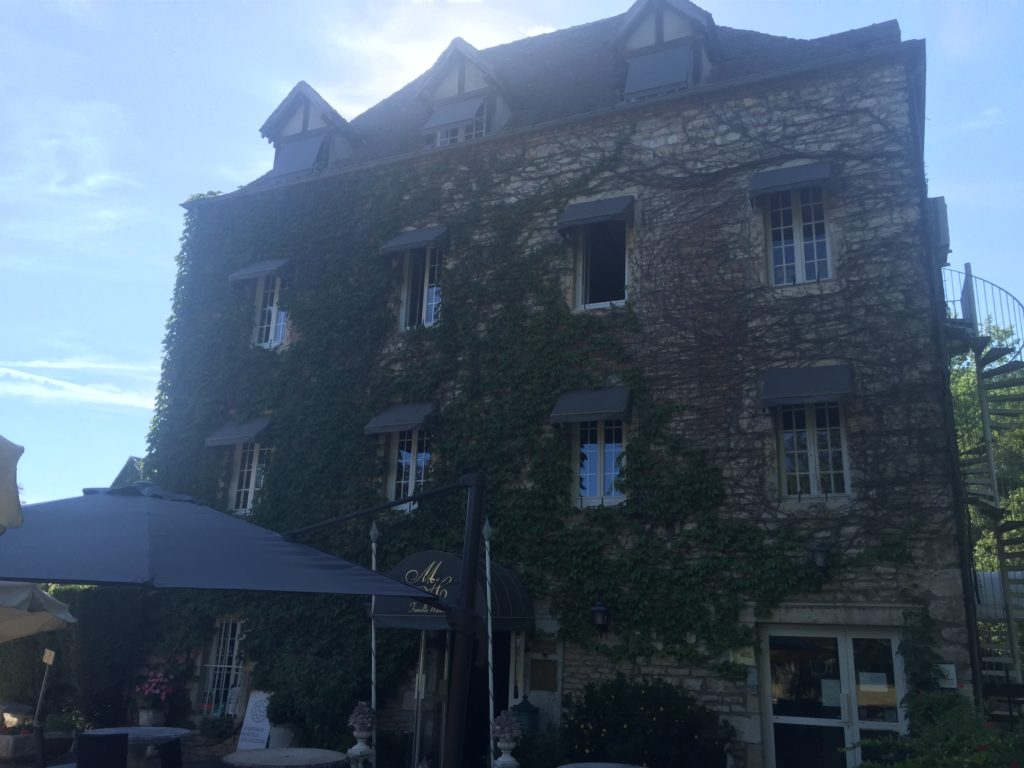 The next day we moved even further south and stumbled upon Lac de Bourget where we hired a pedalo and spent a few hours in the sunshine floating on the lake. It was glorious just to be at one with nature, but before long it was time to check into our hotel for the weekend: Chateau de Candie which was situated just outside of Chambéry. 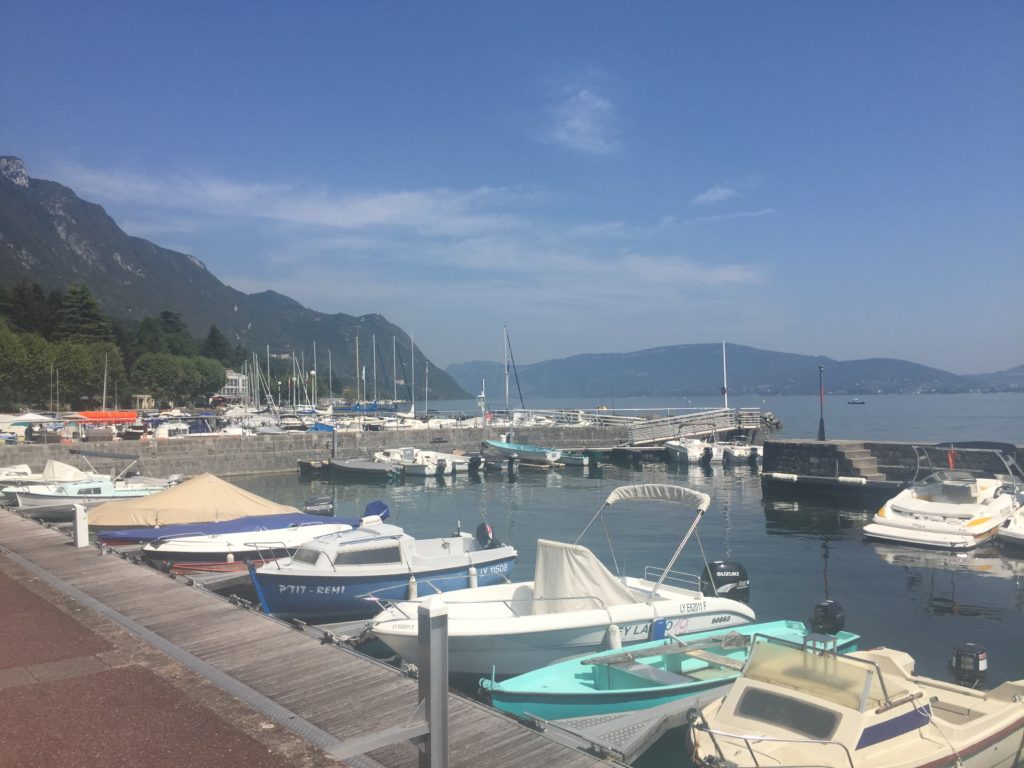 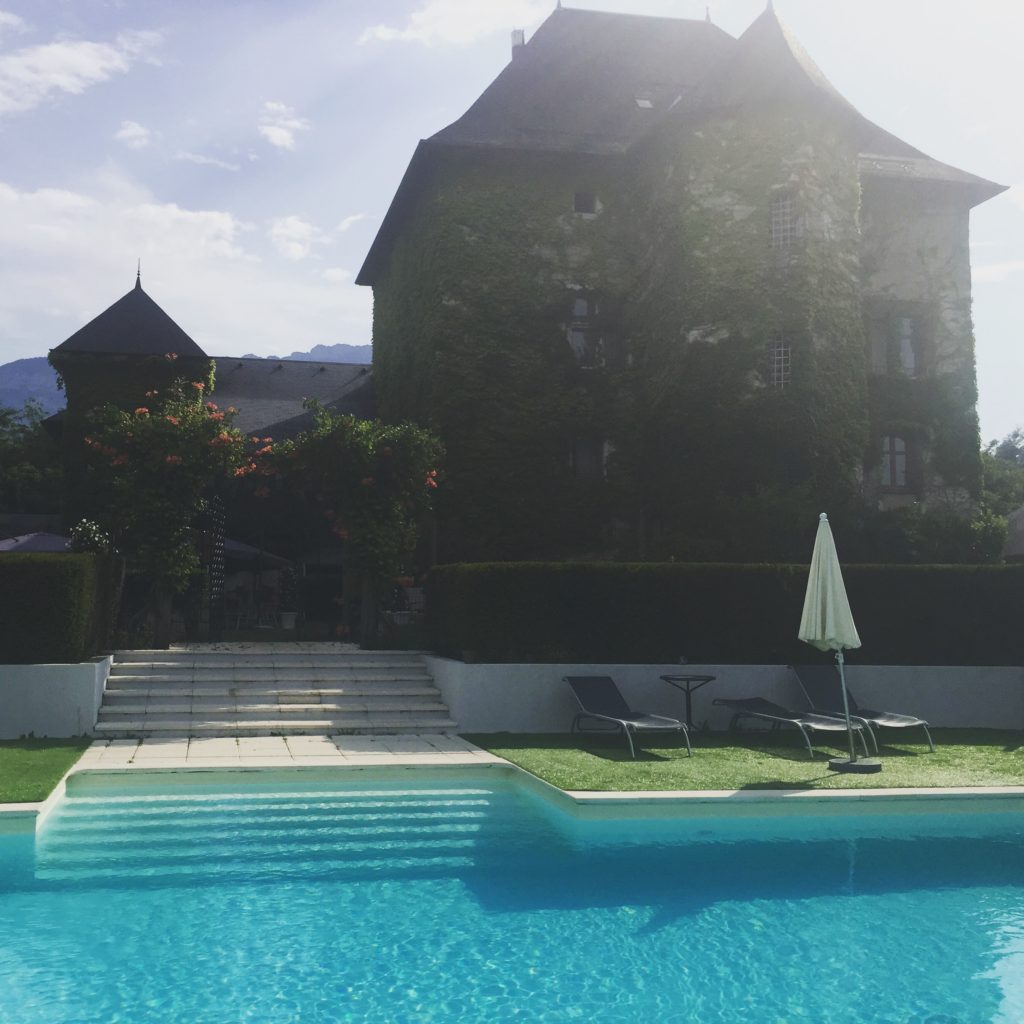 We had a lovely long weekend at the chateau and the sun shone for most of the time so we were able to take full advantage of their beautiful pool and Neil had a day out riding his bike around the alps. Before we could barely blink, Monday arrived and it was time to depart. We drove back up north towards Dijon and spent two days in the city of mustard.

I spent ten months living in Dijon way back in 2006 and it was glorious to be back in the city. So much had changed since I was last there but the food and the Kriek was still as delightful as ever! 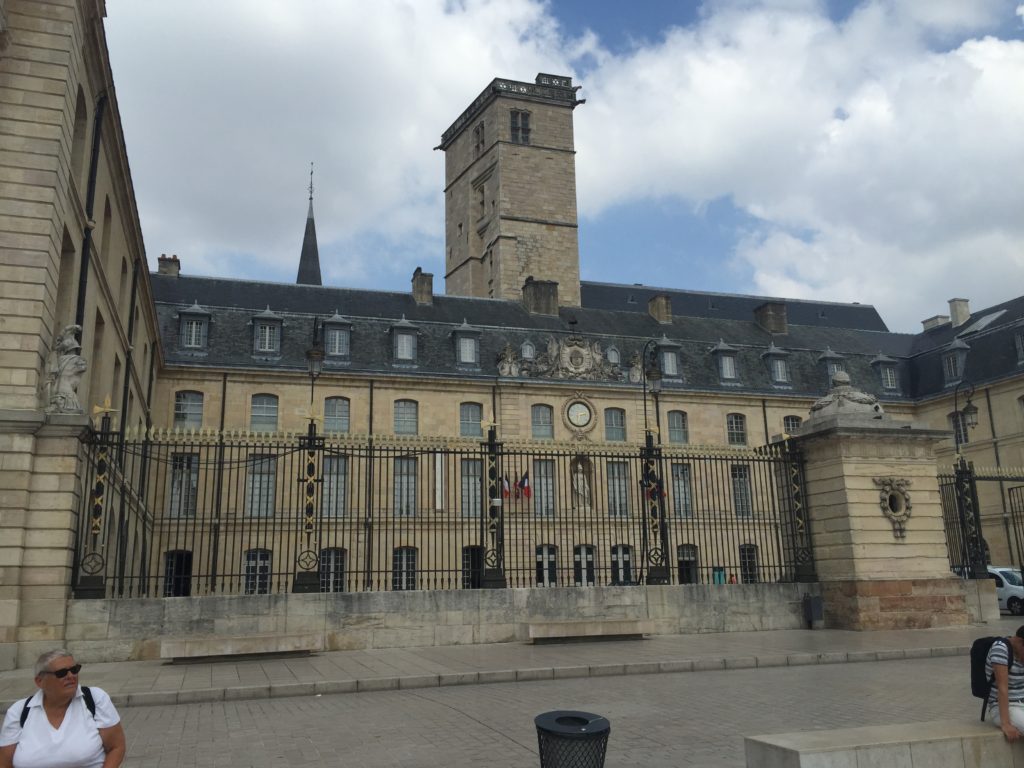 Our last stop on the way up north back to Calais was in a lovely small town called Soissons. We stayed in a beautiful home called Domaine de Montaigu and spent a few hours looking around the ruins of an old cathedral before getting back in the car and driving towards England. 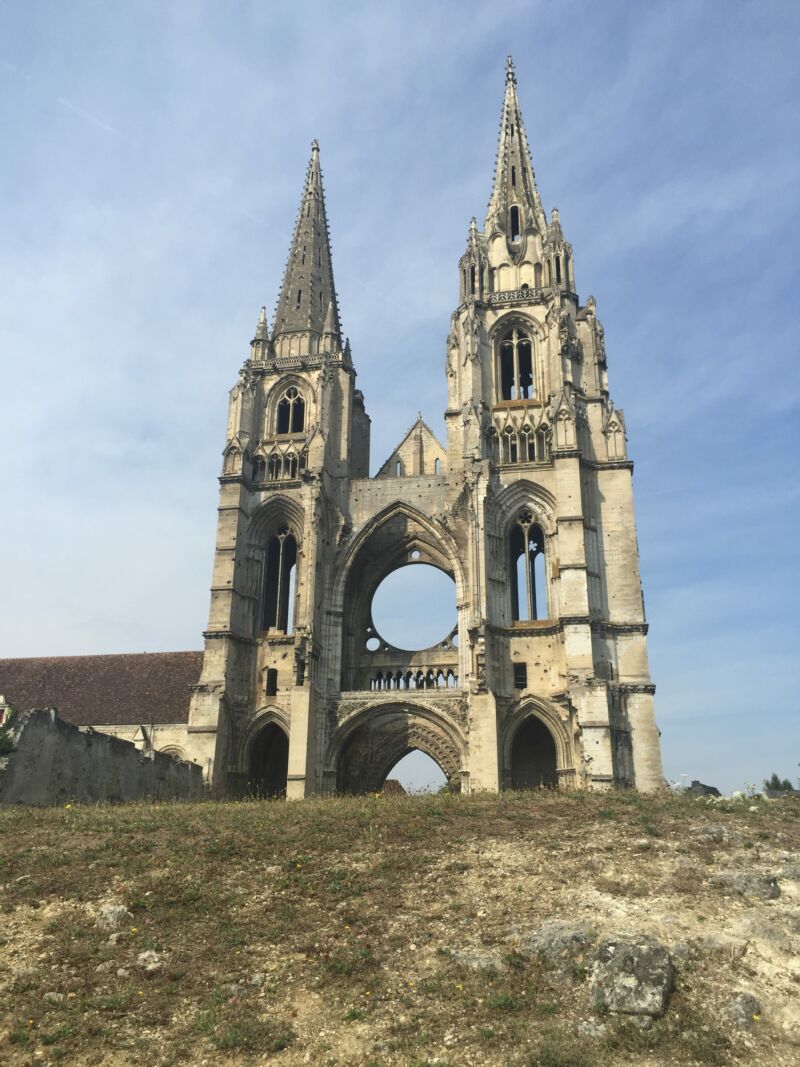 This road trip was one of the best holidays of my life and I can’t wait to do it again someday. It was glorious eating so much amazing French food and meeting different people from different départements along the way. I highly recommend a road trip around France, each town and city has its own culture there’s so much to see and do! I love the slow paced life in France and how quiet all the roads are. I found driving so simple and relaxing whether I took the motorway or the B roads.

What has been your favourite country to road trip around?

Oooh it looks lovely, some of my best memories as a child are of road trips in France, you'll have to take Dex!