For Dexter’s 1st birthday I really wanted to do a cake smash, but when I went online to look at how much it would be to pay someone to do it professionally I was very taken aback. What with being on maternity leave for so long and saving for a house, I did not have hundreds of pounds to pay for someone to do it for us, so decided to do it myself.

There are a few key things you need to do a cake smash at home:

I really wanted to make it as simple and as cheap as possible, so my first port of call was eBay. I had scoured Pinterest for cake smash ideas, themes and colour schemes and decided to use teal and white as our colour scheme. From eBay I purchased a plastic teal tablecloth, a fabric white tablecloth, teal balloons, white tissue paper pom poms, ‘I AM ONE’ bunting and an outfit for Dex. His outfit consisted of a vest with ‘ONE’ written on it in golden letters, braces, shorts and a gold party hat (although this got torn off and broken early on!)

We started by clearing an area in our living room for the cake smash to take place. We removed all the furniture so we were left with a big open space that we could decorate. We fixed the teal tablecloth to the wall as a backdrop before adding the white tablecloth to the floor. To decorate the area further ee blew up six balloons to leave floating on the floor and made up the tissue paper pom poms. We hung the ‘I AM ONE’ bunting so it hid the sockets visible behind the tablecloth and we were good to go!

We bought the chocolate cake from Costco and it cost less than £10. I do enjoy a bit of baking but by the time you have bought of all the ingredients and spent the time baking, it is so much cheaper just to buy a cake. The ones in Costco are made fresh everyday and taste amazing.

When it was time for the cake smash, we simply put the cake on the floor, put Dexter next to it and let him go for it. He spent around five minutes tasting the cake carefully before trying to wander off. We gave him another few minutes before he had had enough and we gave him a quick bath.

What was fab about doing the cake smash at home was all of our family who came to the party were able to watch it which they loved. Best of all everything cost me less than £50! 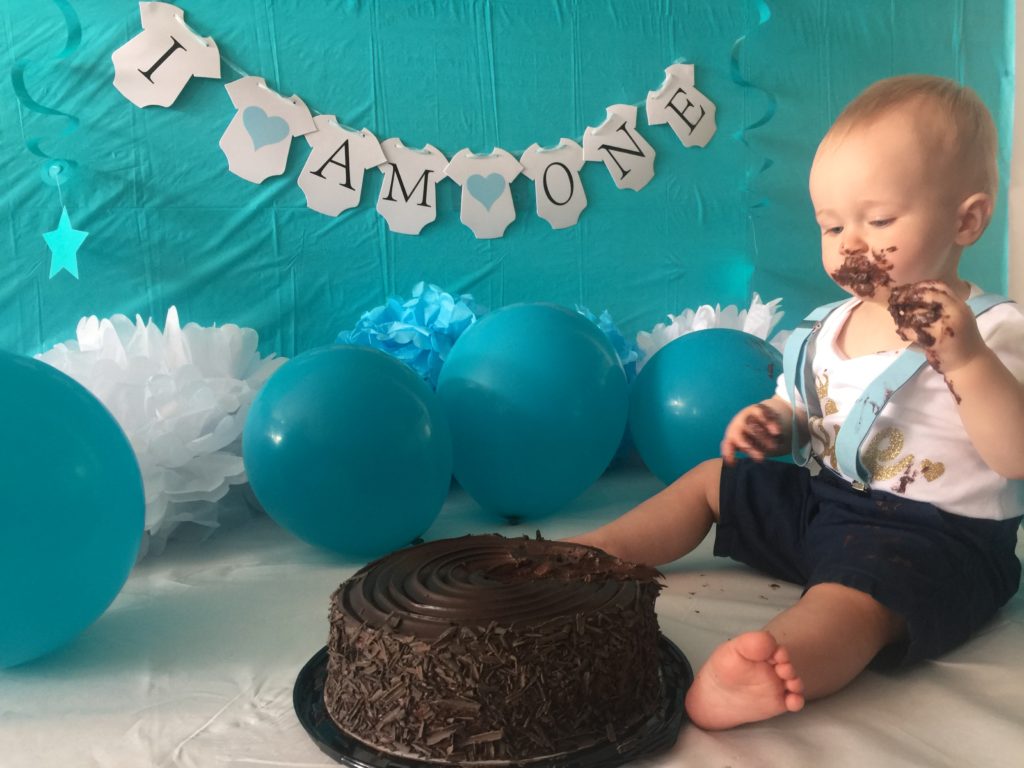 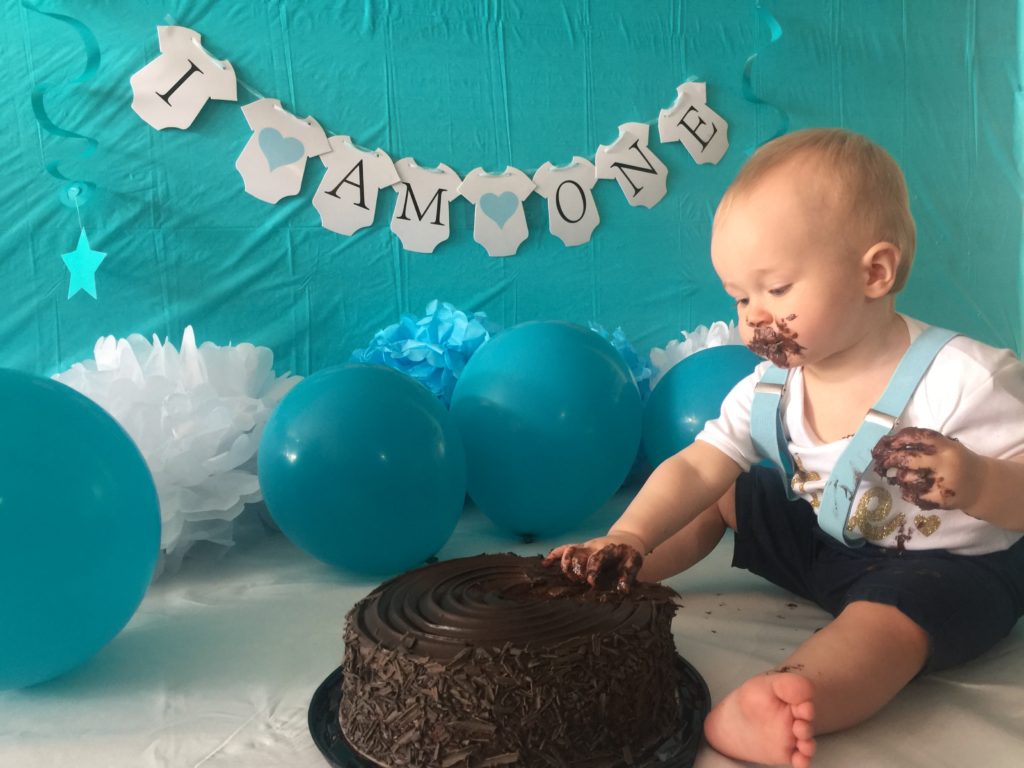 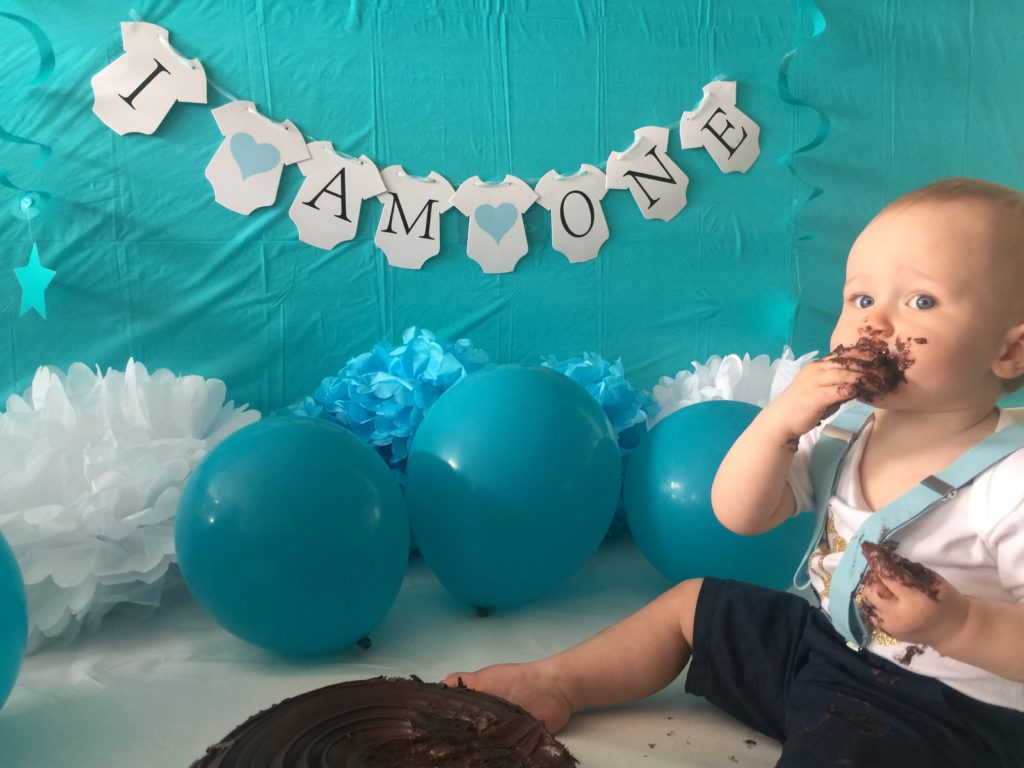 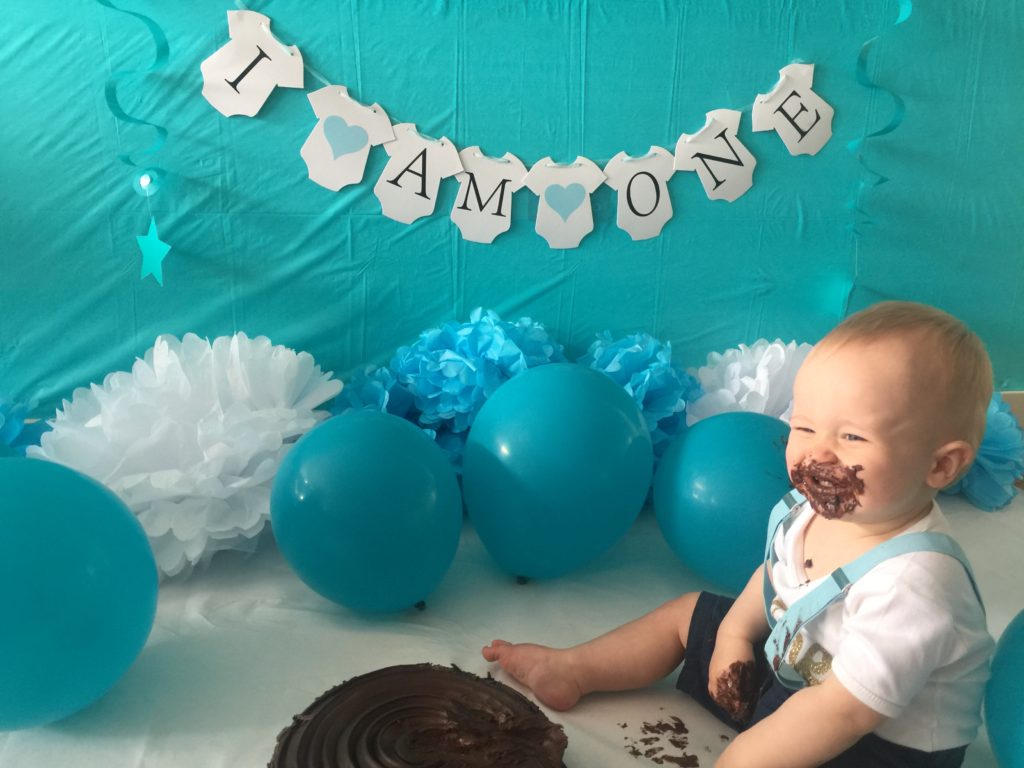 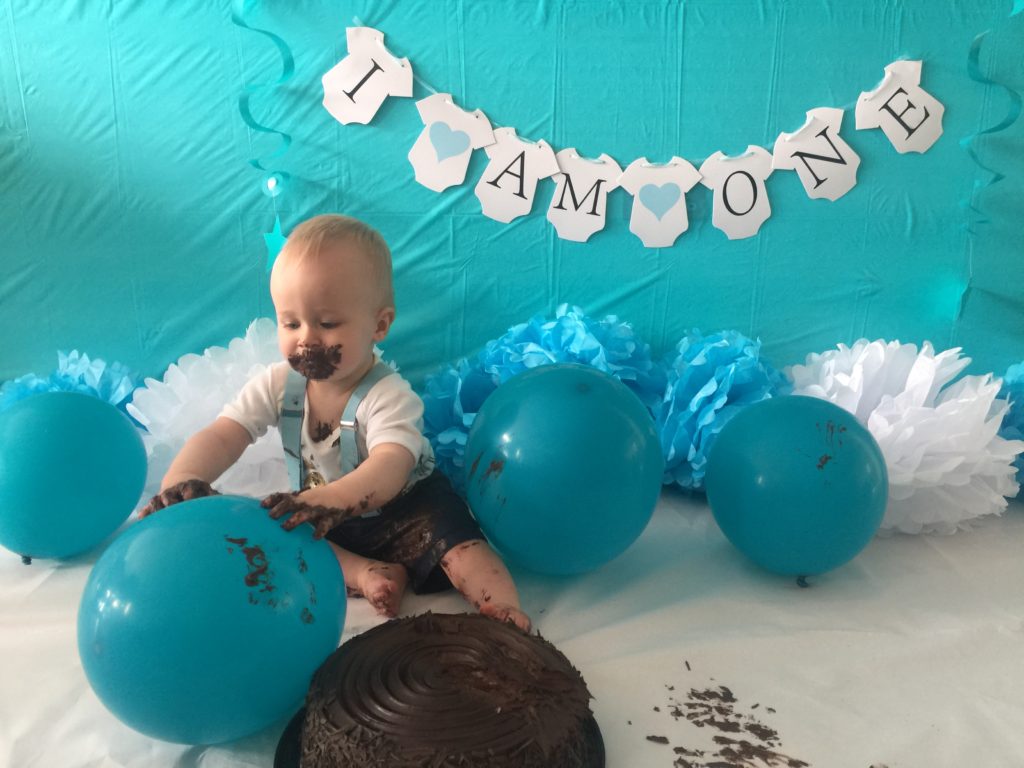 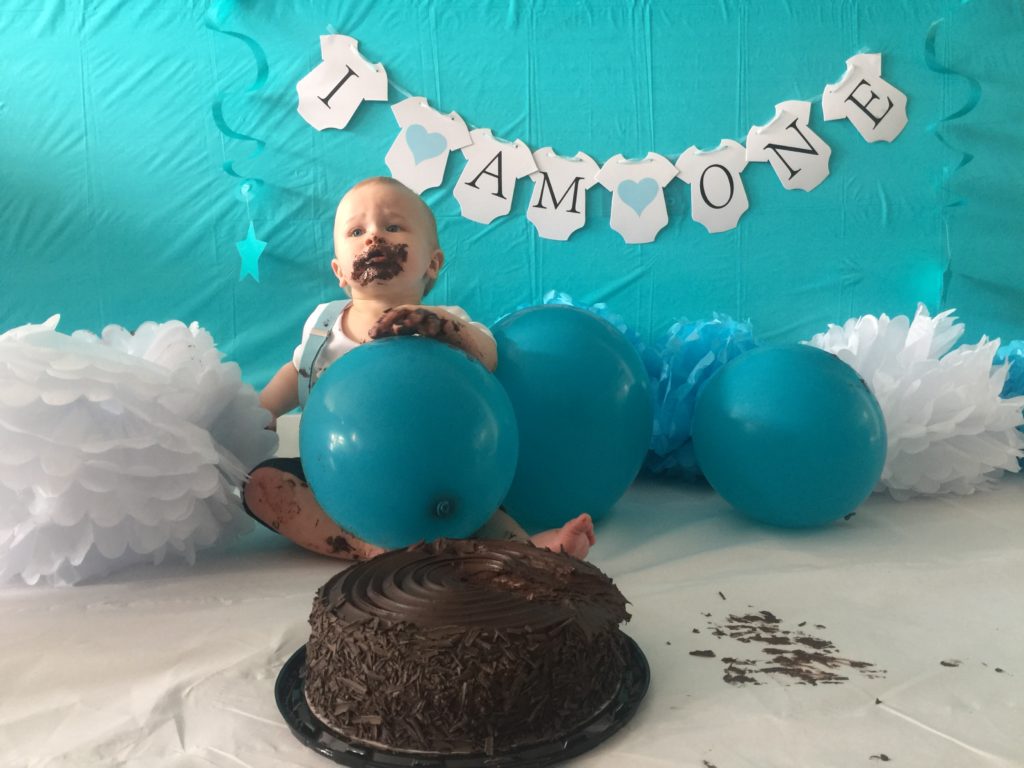 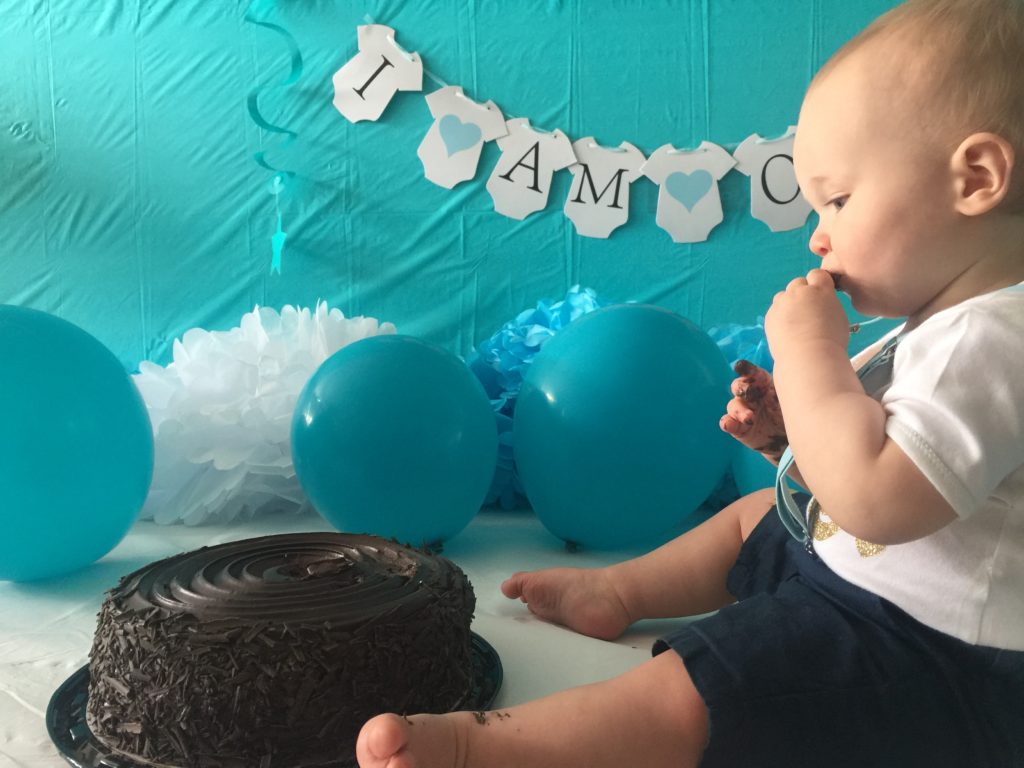 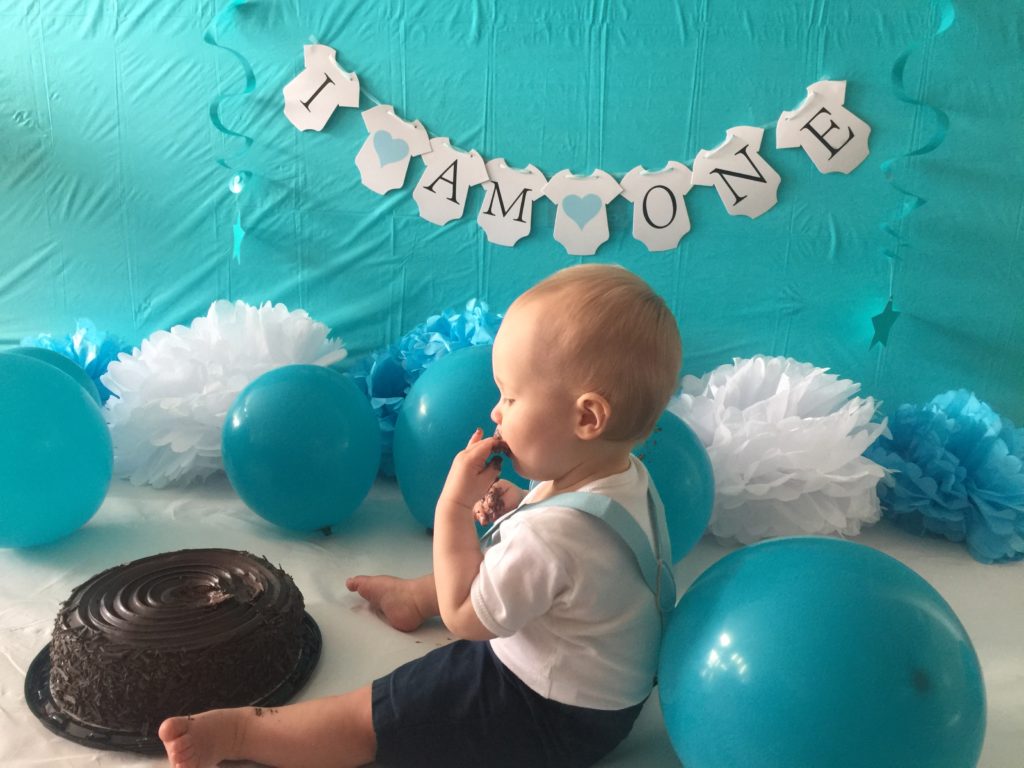 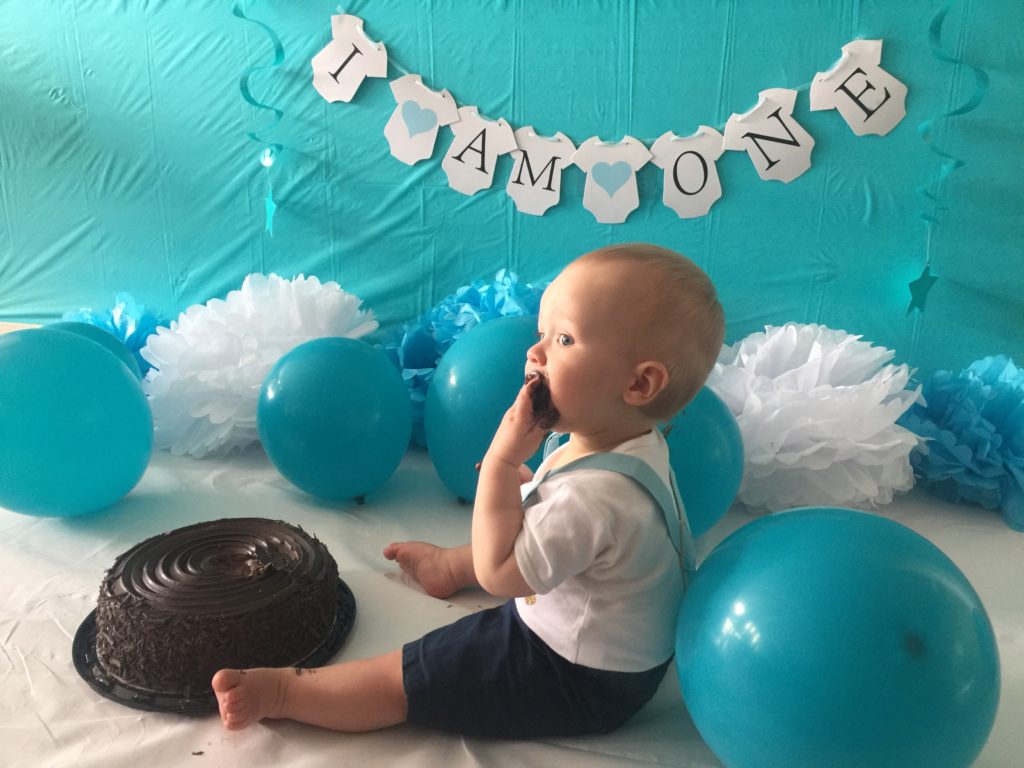 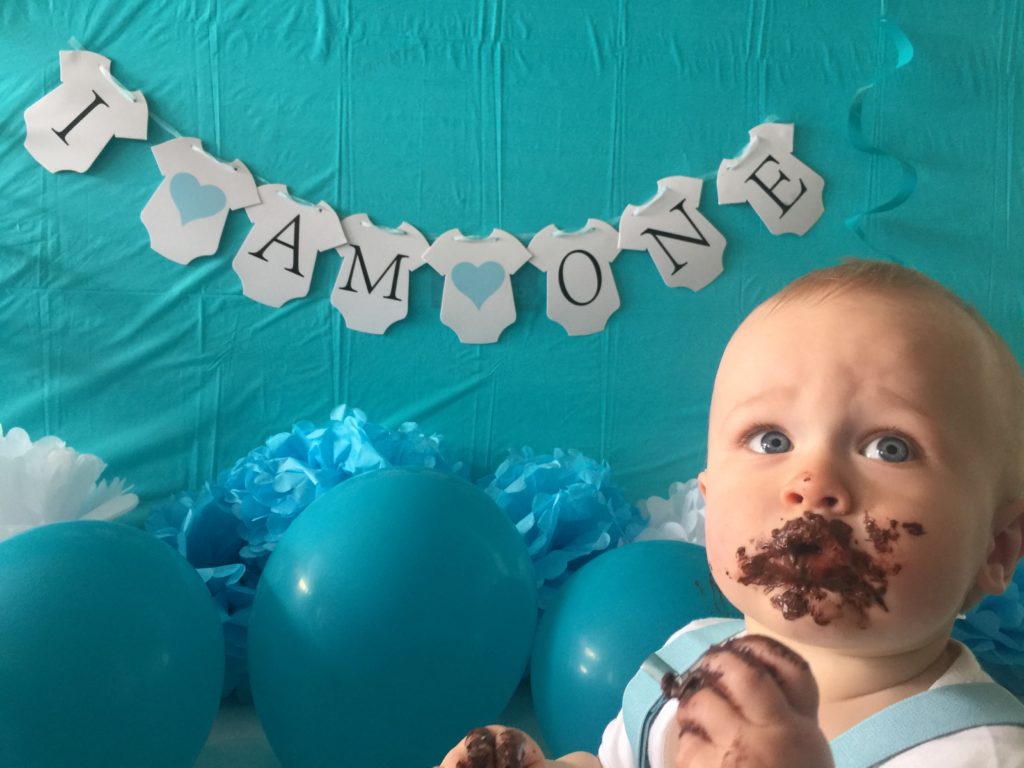 If I were to do it again I’d make sure I knew what sort of set up I wanted before I started. Originally I put the teal tablecloth on the floor and because it was plastic it got ruined when Dex had a crawl over it when my back was turned for thirty seconds. It being plastic also showed up every little crease in it. I would probably choose a fabric one next time.

Secondly, I’d have the bath ready and waiting for Dex to be plunked in afterwards. It was a bit of a faff trying to get him washed and dressed again while we still had guests at the party- preparation definitely would have been key!

Were the photos as good as if a professional had taken them? Well obviously not, but in all honesty I couldn’t justify spending the same amount of money that I would spend on a short holiday for a few images on a USB stick. I am happy with the images we captured and don’t regret doing it at home.

What do you think? Would you do a DIY cake smash?

What a cute idea! I love his face covered in chocolate - very cute! Were you tempted to join in? I would have! haha! x

It looks awesome!! I always think a cake smash is a lot of money for what it is anyway, you want to capture the moment and I think this is perfect. His face with the chocolate beard is just delicious... although I REALLY hope you got to eat the rest of that cake, he did more of a cake smear than a smash!!

Haha! You are so right...we ended up chucking it to be honest. There was another cake that we had bought to eat and we just had TOO MUCH CAKE (if that's possible!)

Abi - Something About Baby

Ah this looks fab! Dexter looks like he had a ball, and the decorations work really well. We did the same for similar reasons - I just couldn't justify the cost, and after paying a lot for a newborn shoot and being extremely disappointed by the results, we decided to do it ourselves! We had a superhero theme, and set it up in the garden so the mess could be hosed away easily. Alfie loved it, it was fun and not stressful because we weren't on a time limit, and they are some of our favourite photos! Only downside was the tantrum that followed us taking the cake away after he'd eaten pretty much all of it, and the blue nappies that followed from the icing ha!