There are a few choices when it comes to dining out in Coral Island, Blackpool, but we chose The Buccaneer, which is a family friendly pub and restaurant serving traditional pub classics in a relaxed environment. This review aims to share our experience of The Buccaneer, the menu, the staff, the atmosphere and our overall impressions of one of the restaurants inside of Blackpool’s largest indoor entertainment centre.

The Buccaneer, Blackpool is located in the heart of Coral Island, in the middle of all the noise and the madness, however, as soon as you step through the doors, you are met by a much more relaxed environment which makes you feel at ease straight away. The Buccaneer describes itself as a family friendly pub, and you are greeted with the sights and sounds of your typical English pub: sports on the telly, wooden tables and comfy chairs, a large bar area with a range of beers on tap and decent music piping through, but at a reasonable noise level. 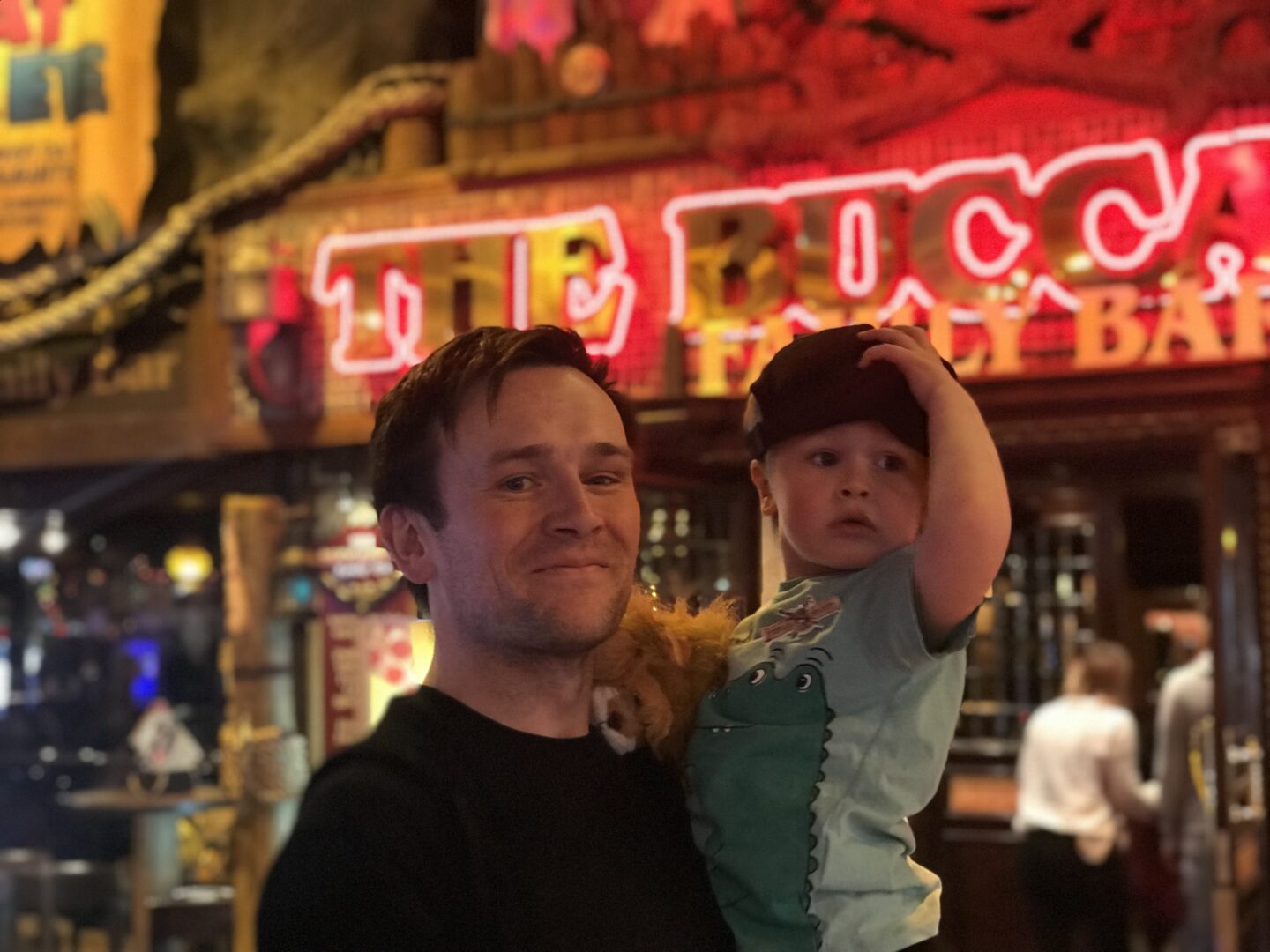 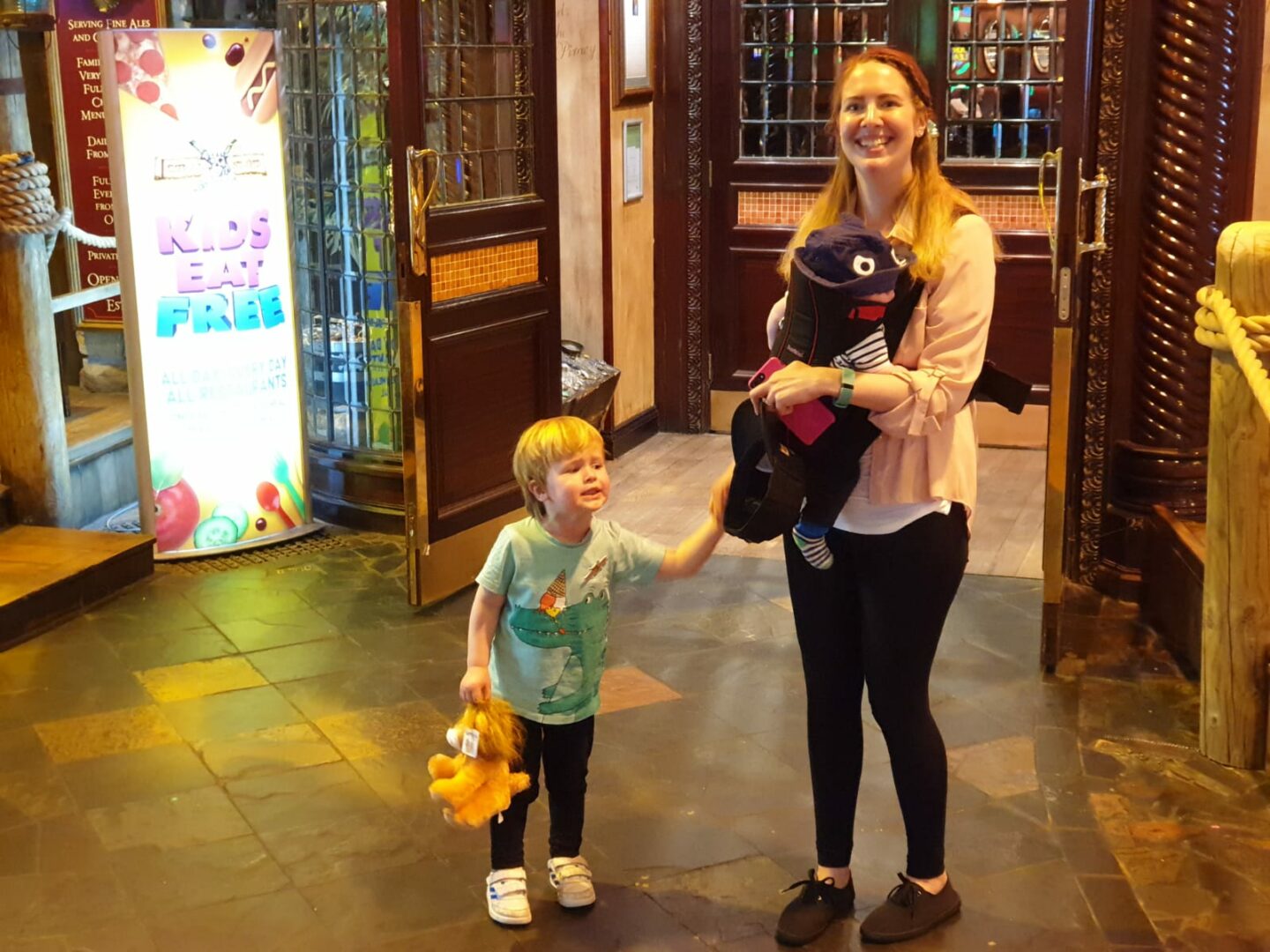 As soon as we walked in we noticed a sign that says to sit wherever you please and order at the bar. I much prefer this way of seating patrons at a restaurant as it means you can choose exactly where you want to sit, or more aptly, Dexter can choose where we sit; he likes to be in control at all times!

The menu has a wide selection of pub classics including starters, mains and desserts. The menu isn’t available to view online, but from memory, the food was your stereotypical English cuisine such as burgers, curries, hunter’s chicken, fish and chips etc. There is also a kids menu with the usual fayre like chicken nuggets, fish fingers etc. I wasn’t expecting the menu to be that exciting, and to be honest, when you choose to dine in a pub-style environment, these are the types of meals you expect.

To start, Neil chose the loaded nachos and I picked the chicken wings. Neil was highly impressed with his nachos which were loaded with salsa, jalapenos and melted cheese. He was especially pleased that the sour cream came separate in a small ramekin in the centre of the nachos as he hates anything creamy and loved how spicy they were. he even went as far as to say they were the best nachos he’d ever had (although he has a habit of saying this whenever he is eating after being starving for a long time!) 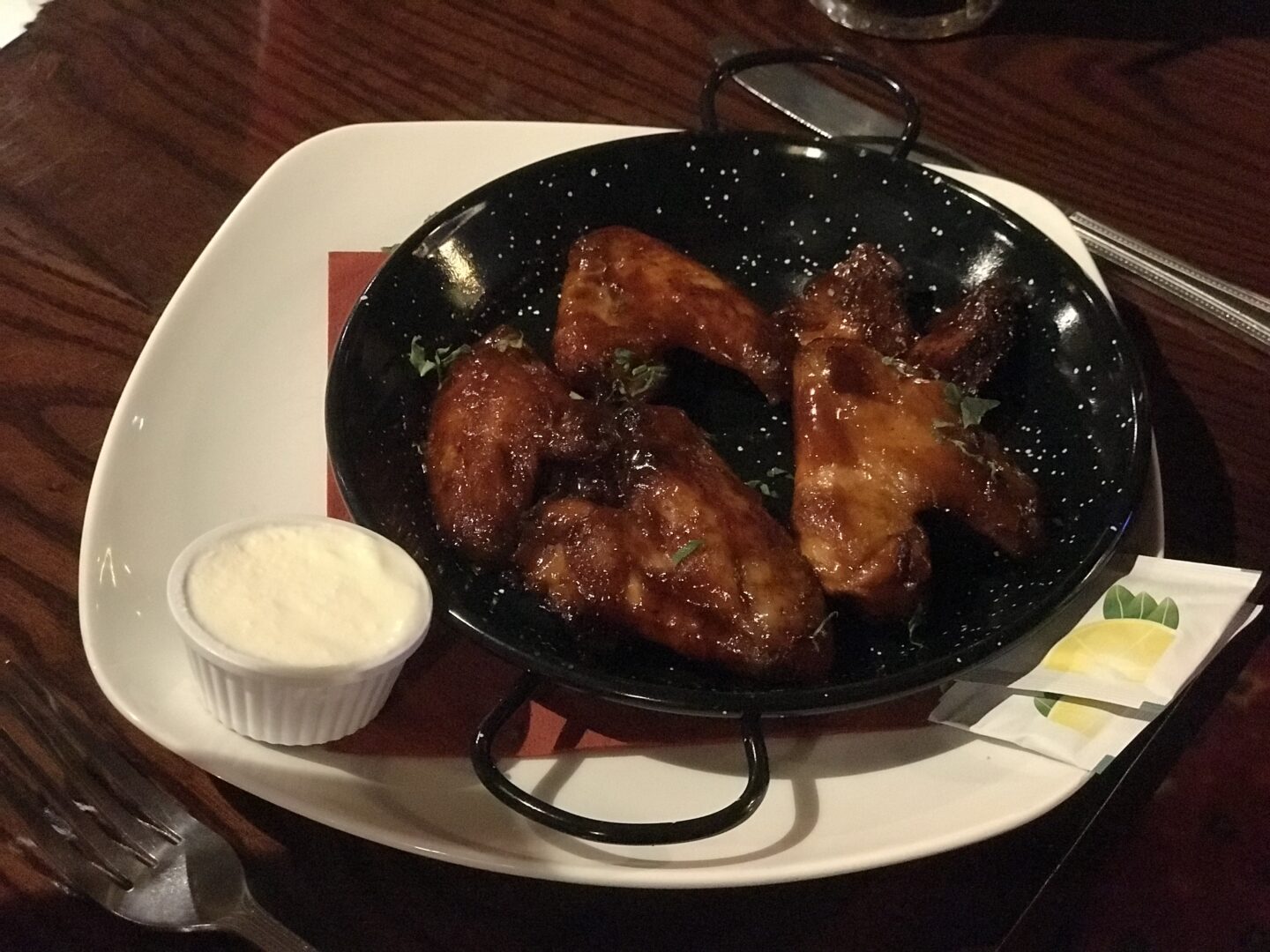 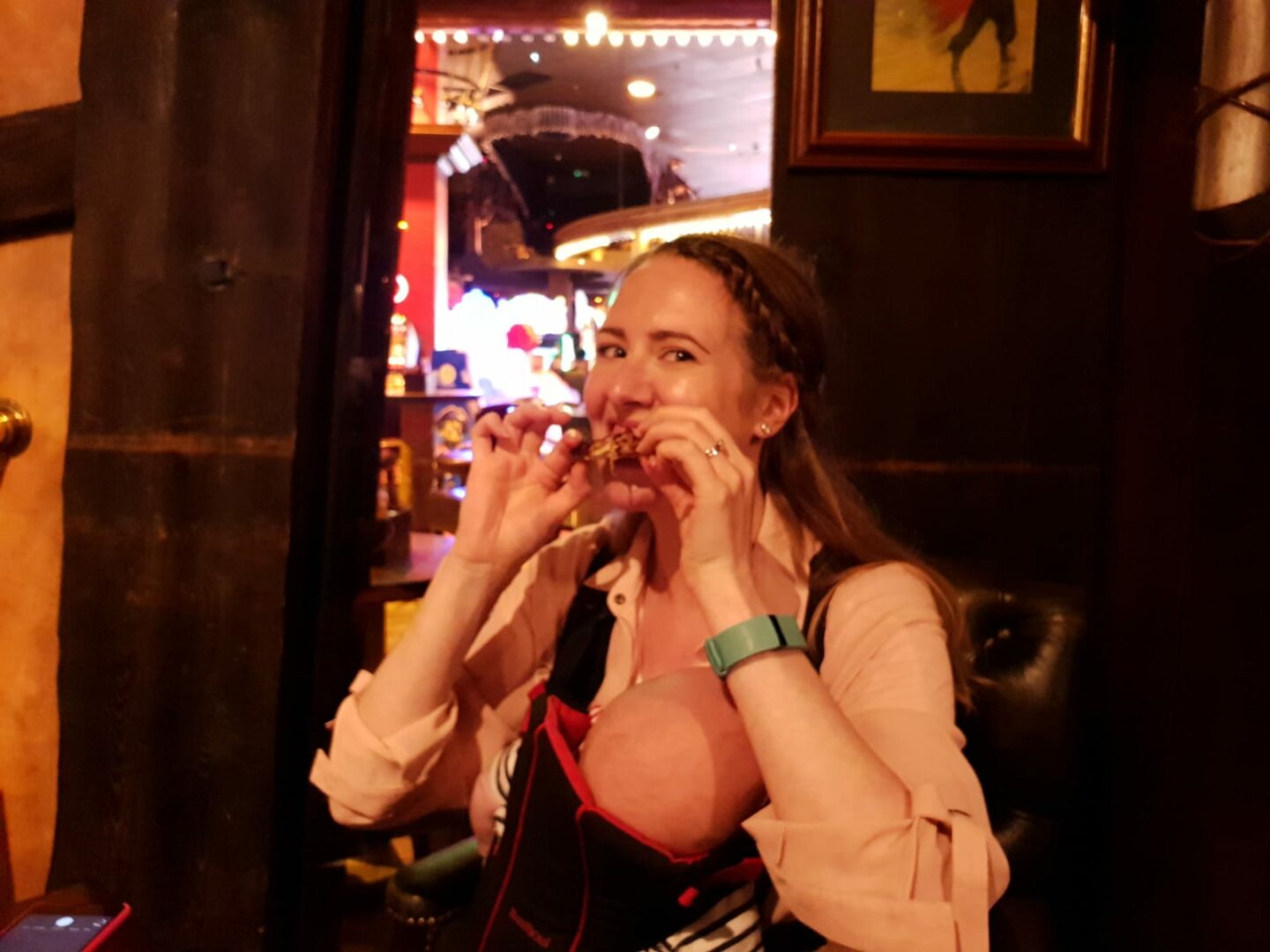 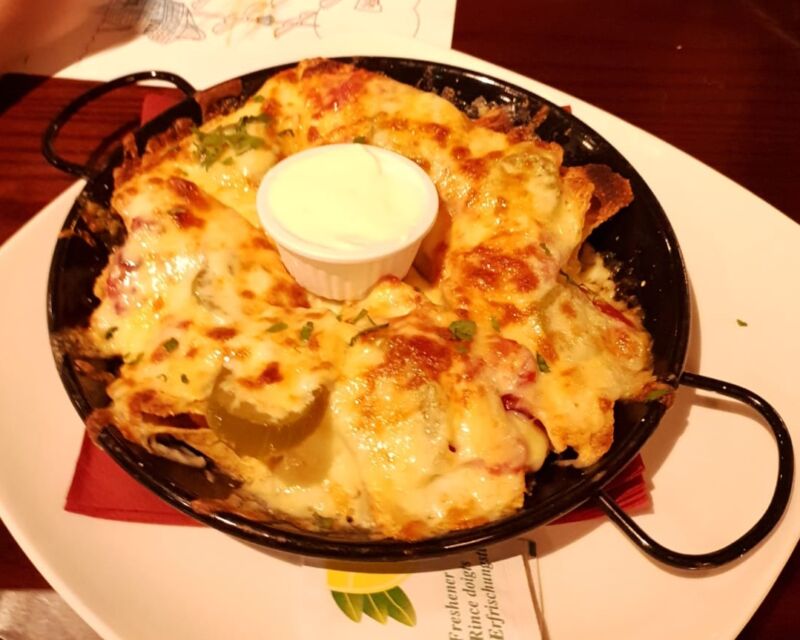 I thoroughly enjoyed my chicken wings which were coated in a BBQ sauce. They were lovely and hot when they arrived and came with a sour cream sauce, also presented in a ramekin alongside. The portions were both a really decent size, but we were ready for round two!

For the main meal, I chose the chicken tikka massala curry and extra popadums and Neil picked a double cheeseburger topped with bacon and jalapenos. My curry arrived with white basmati rice and a naan bread alongside a really decent sized portion of chicken curry. The curry was delicious, although not as creamy as a massala should be in my opinion, however, I was not disappointed. The popadums were clearly made fresh and were unbelievably tasty! I was really, really impressed. 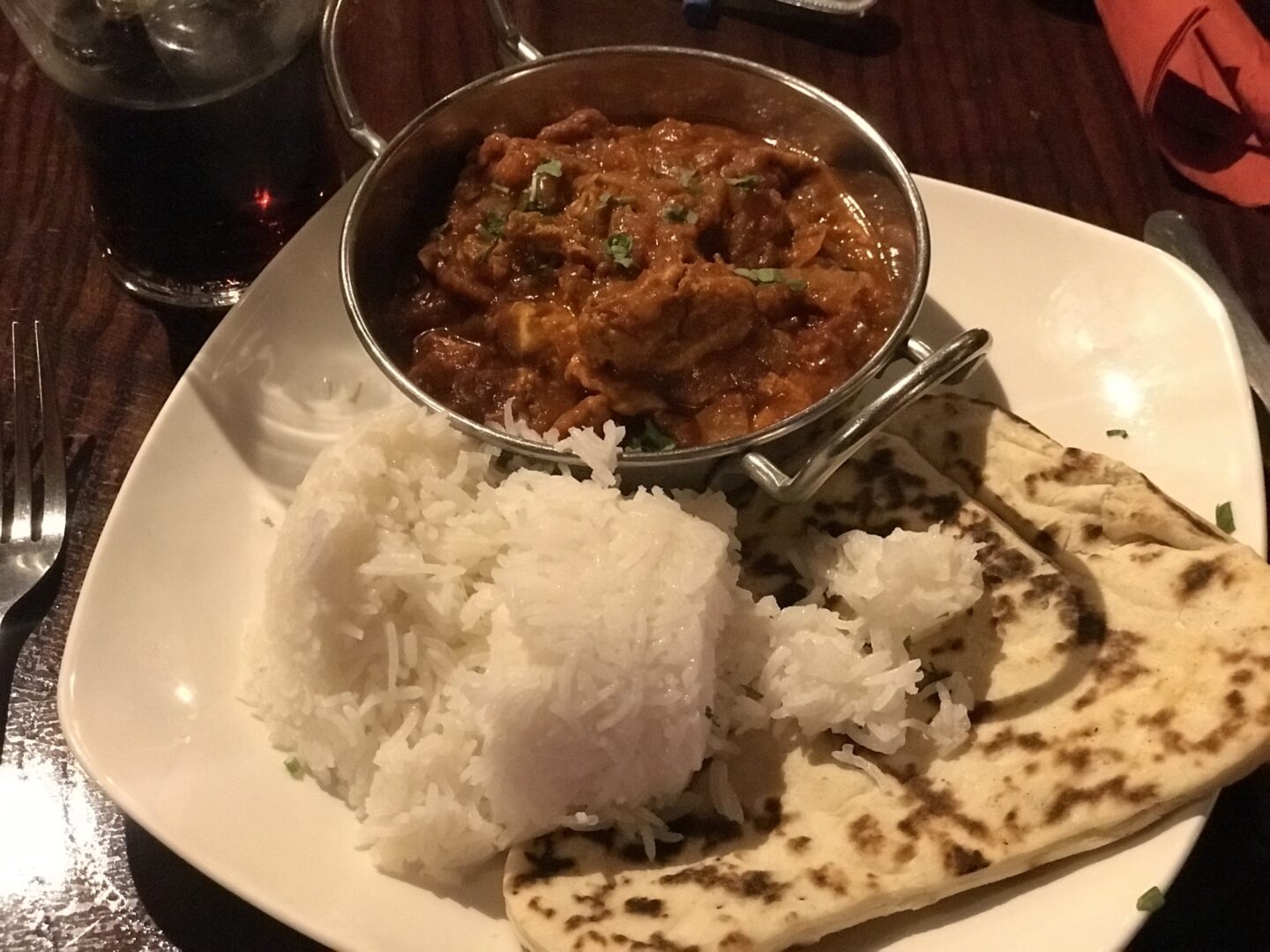 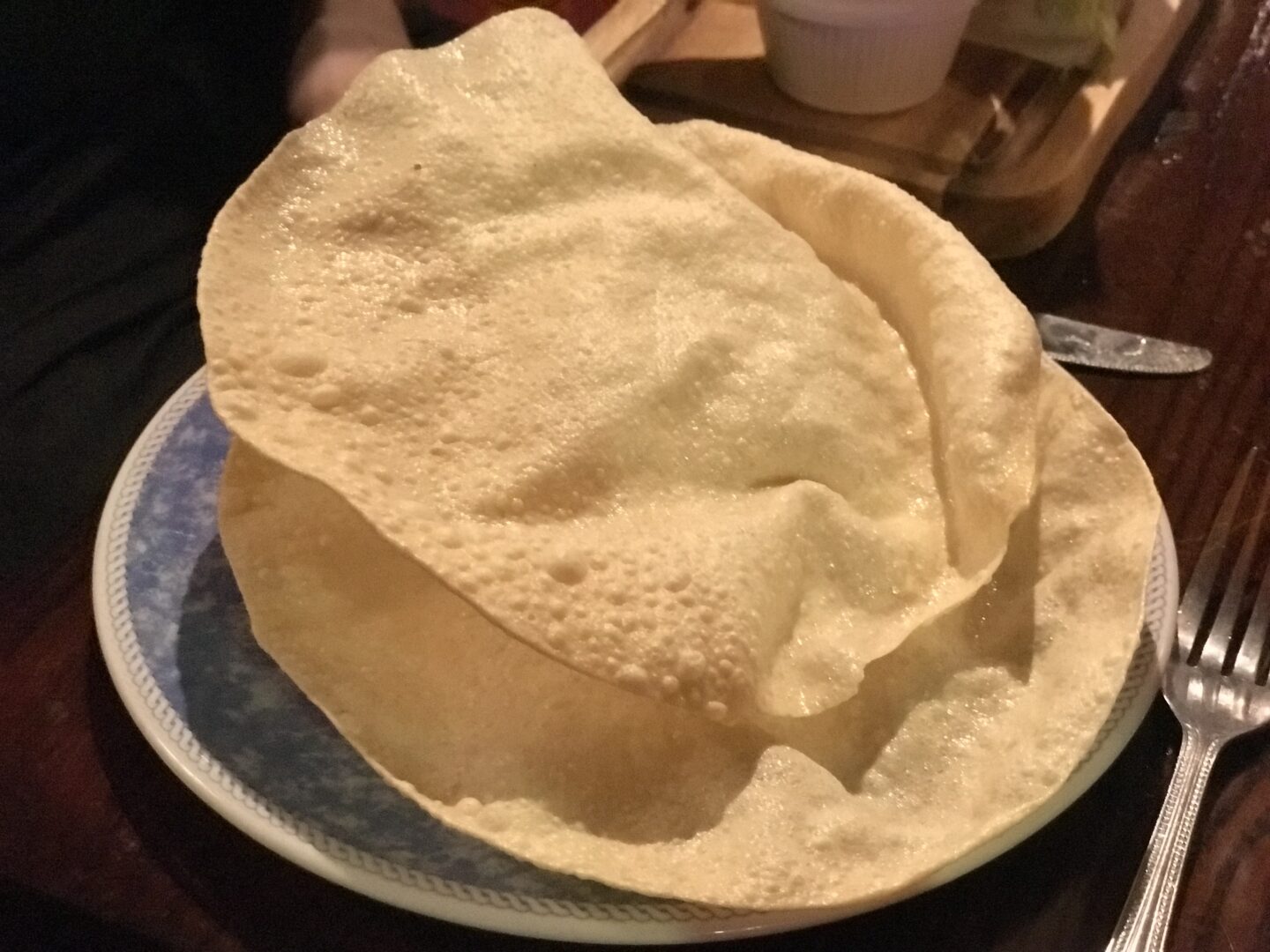 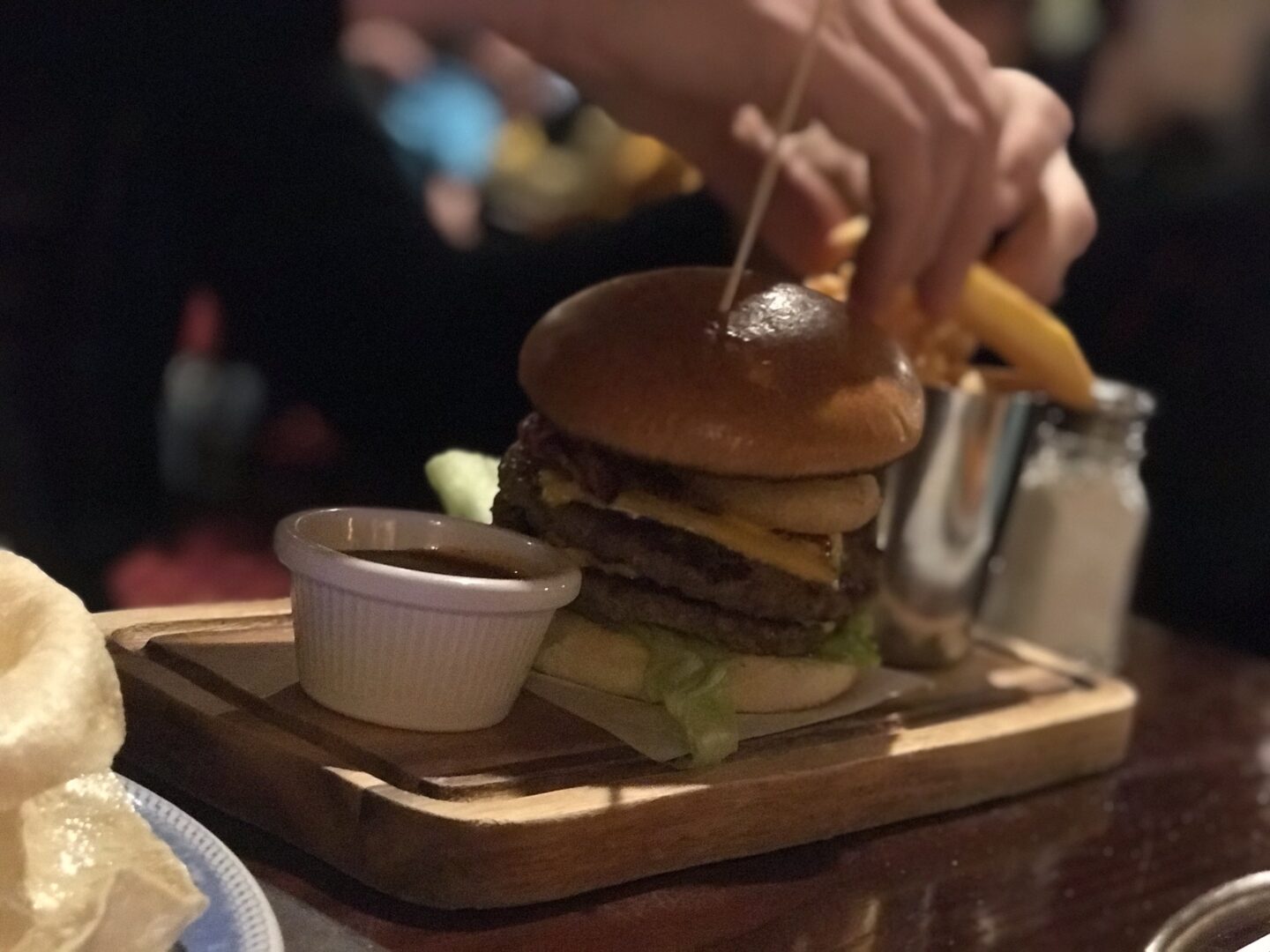 Neil’s burger came served on a chopping board alongside some chips placed in a small metal bucket. (As is the chic way to present pub food these days!) The bacon on the burger was nice and thick and of a good quality and once again the BBQ sauce came separate in a ramekin so you could choose how much or little to put on, which Neil was a fan of. The cheese was melted on both burgers and it was small enough to fit in your mouth, which can often be a problem with double burgers. Overall, he enjoyed the tastiness of the different flavours.

I was pretty stuffed by now, but there’s always a bit of room for dessert isn’t there? I chose the chocolate fudge cake and Neil picked a sharing dessert made up of brownies, ice cream and whipped cream. Neil’s was an absolute beast, I think he got a bit confused when ordering! He gave it a good go though and managed to eat most of it!

Related Post: Our Favourite Things to Do in Blackpool With A Toddler 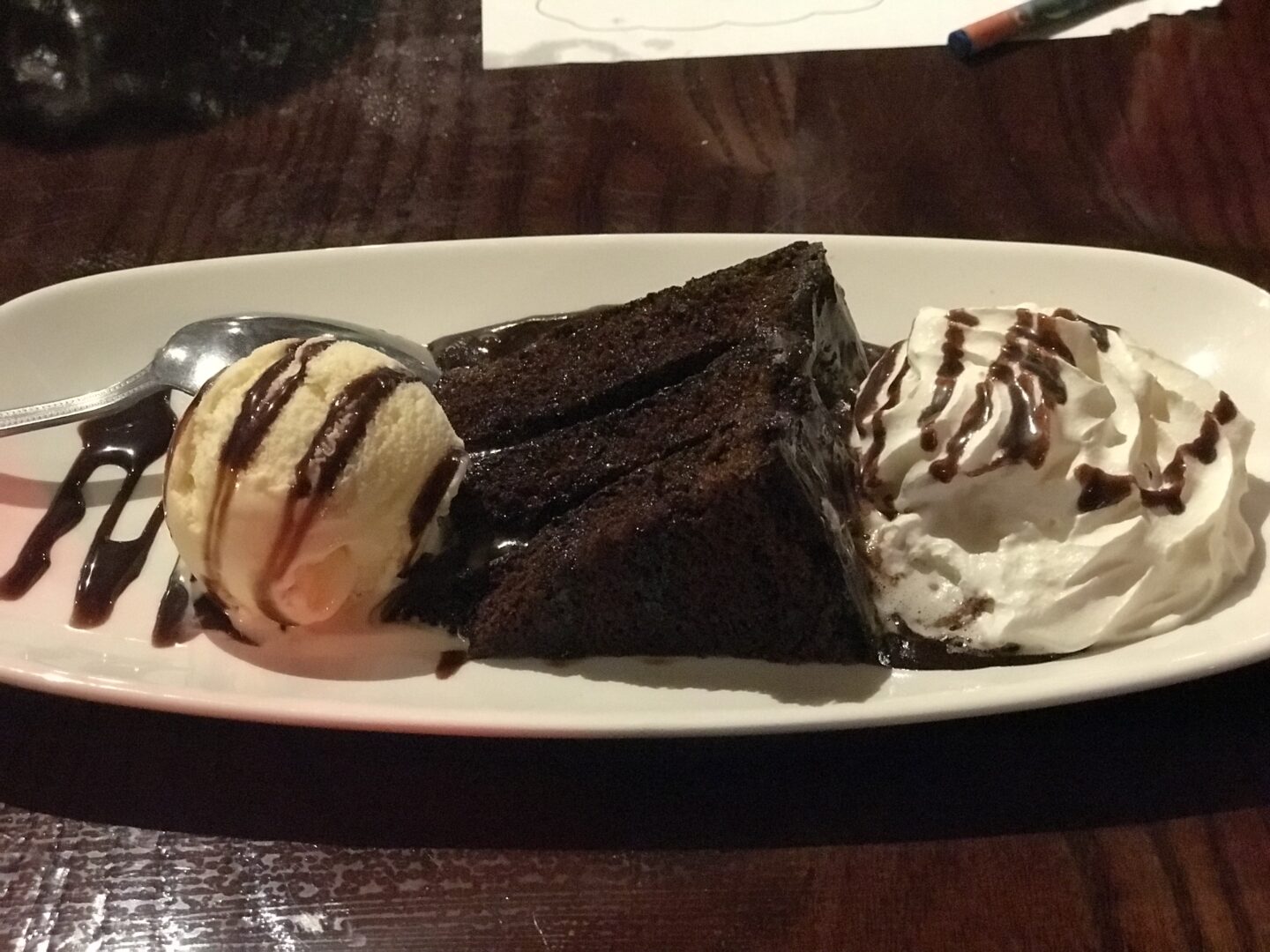 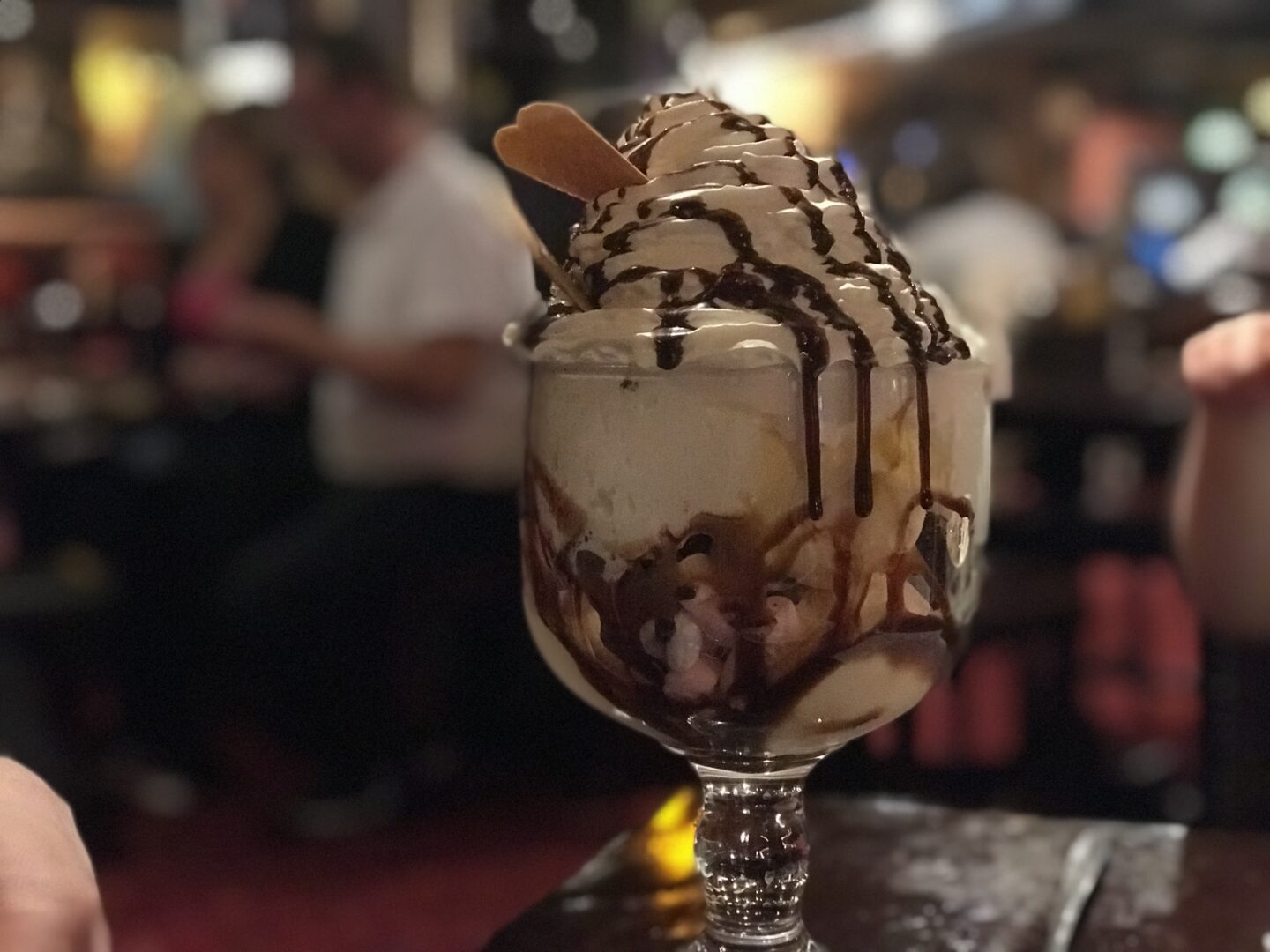 Mine came with squirty cream and toffee ice cream and was incredible. The fudge cake was slightly warmed and the chocolate was all gooey, making the perfect combination with the melting ice cream. Unfortunately, I’m not a fan of squirty cream so I left that bit. 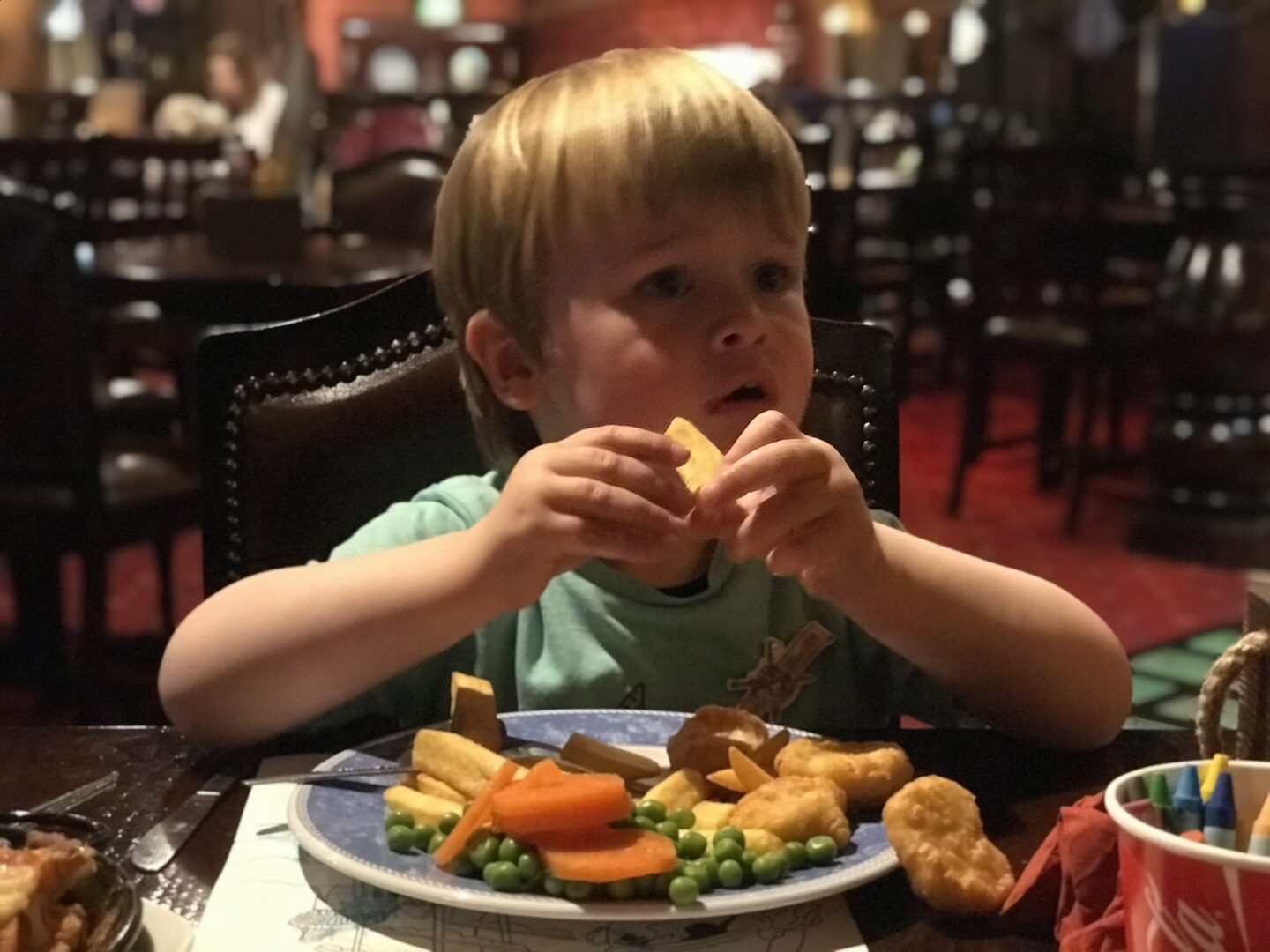 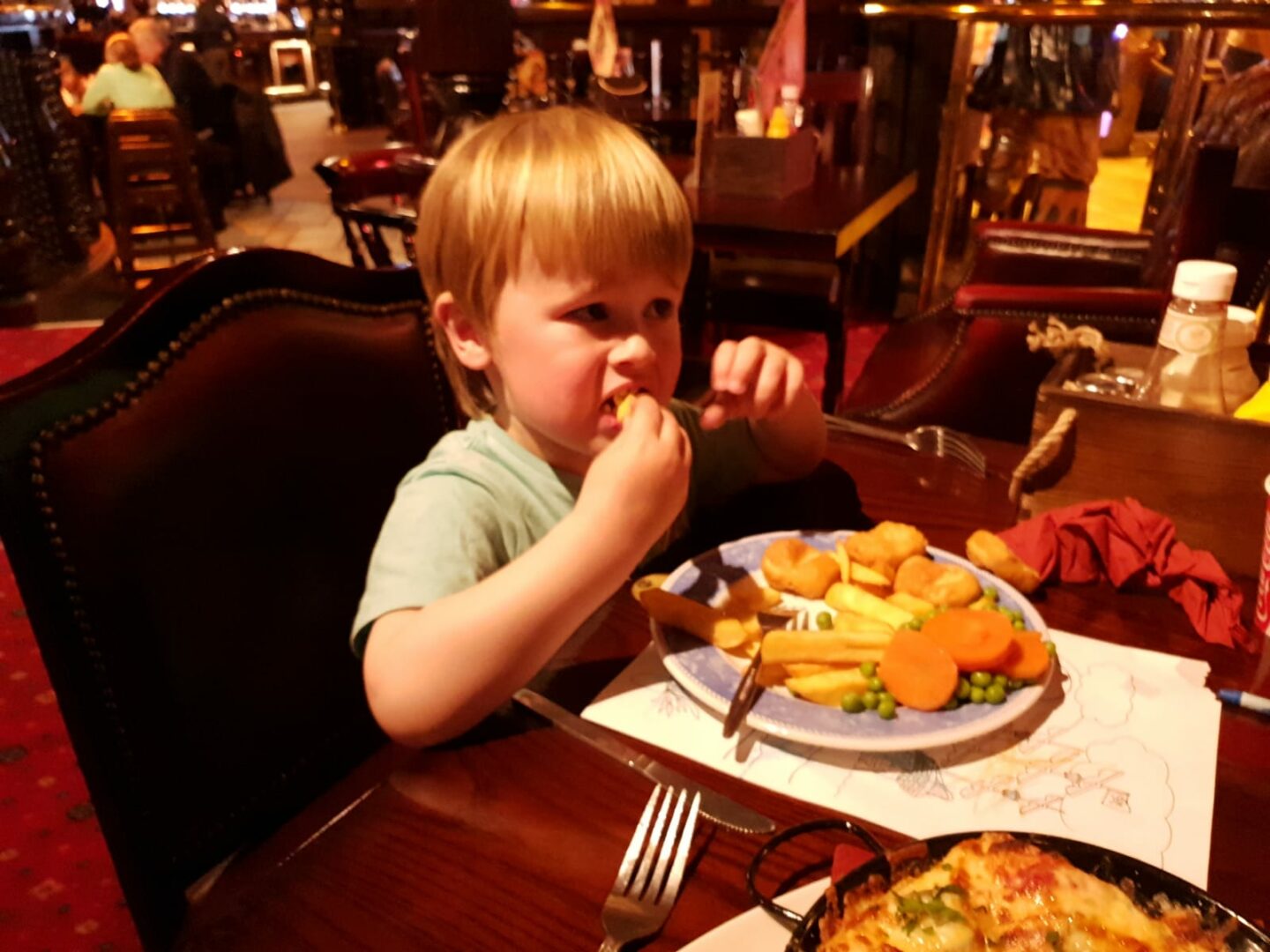 The atmosphere inside was really relaxed and the place was just full of families enjoying a nice meal for their lunch. I really enjoyed the music they were playing which was a lot of late ’90s and early ’00s classics and I still ahve one particular song stuck in my head days later!

Overall the staff were really friendly and pleasant. As soon as we had ordered, one waitress brought over some colouring sheets and crayons for Dexter and was really nice and smiley. Another waiter was super polite when taking our plates away.

However, it was a little spoilt at the end when a different waitress asked me why I had ordered squirty cream if I wasn’t going to eat it. I was a little taken aback to be honest. I hadn’t read the menu properly to see what the fudge cake comes with and my husband had obviously asked for both when ordering as he wasn’t sure which I’d prefer. If it had been fresh whipped cream I would have eaten it, but I simply don’t like squirty cream. Either way, in my opinion, it’s not really up to staff members to comment on whether I have finished my food or not, so this put a little dampener on the end of a really pleasant experience, which was a shame.

Next time we’re in Coral Island, it’s highly likely we’ll stop off in The Buccaneer, Blackpool for a bite to eat because I was really impressed with the laid back atmosphere and how tasty the food was.

I loved the fact that when our starters were brought out, the waitress asked if Dex would like his meal brought out too- there’s nothing worse than a toddler being left without food! It was a shame about the comments at the end which made me feel slightly uncomfortable, but I wouldn’t let that put me off returning.

Overall, we had a good meal out, which kept us full for the rest of the day and it was lovely just to relax for an hour or so with Dexter content with his colouring and Felix asleep on me. (Testament, in my opinion, to how relaxing the environment really was.)

This looks lovely, those chicken wings have my mouth watering - I can't believe you managed to eat a whole meal over Felix snoozing on you - I'd have coated him in it!!

We have been to Coral Island once with the boys, but when Q was very little. Never tried the food but it looks delicious!