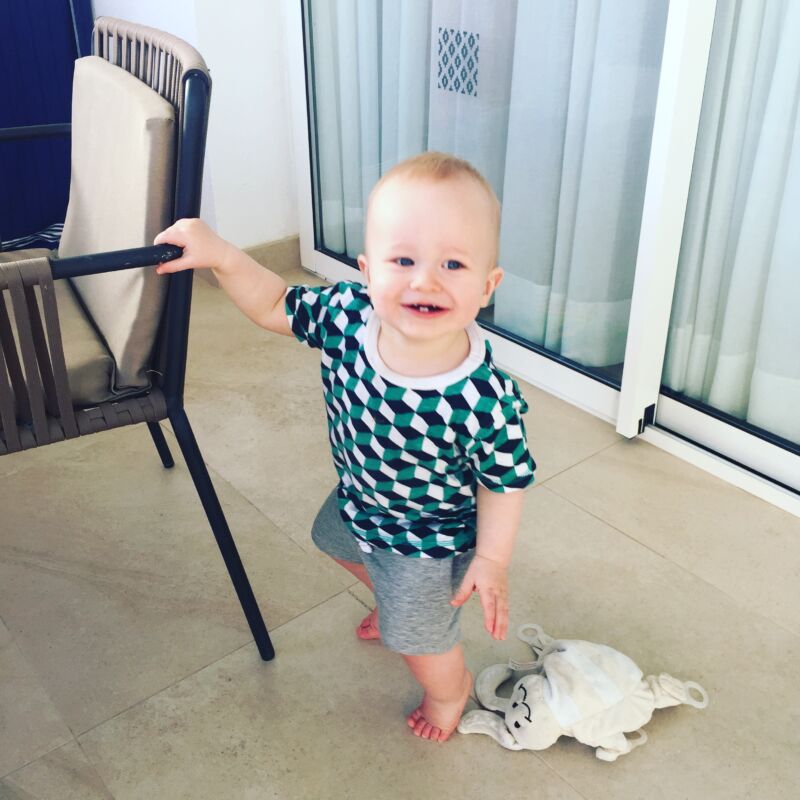 Another month has passed by in the blink of an eye. Dexter is growing more and more everyday, both in height and as a person. It’s so incredible to watch him; so what’s new this month? Here is Dex’s 11 month update.

I feel like this is becoming a regular thing for me to write, but we still have no more teeth! We are still on four teeth: two lower central incisors and upper canines. We paid a visit to the dentist a couple of weeks ago and he showed a slight concern that his teeth weren’t coming in their correct order and wants to keep an eye on it during the next few months. We are waiting so patiently for the upper central incisors to come in, I really hope they come soon. Dex chews everything in sight and some nights seems to be in considerable pain, but no new teeth.

Dexter has been sleeping so well recently. We had a few weeks of having to give him a bottle between 10-11.20pm but this seems to have disappeared again over the last couple of weeks. He is now having 6oz in a cup with his breakfast at around 8am, a 6oz bottle at 3pm and an 8oz bottle before bed at 7pm. He sleeps 7pm until 6.30/7am each night and has one or two naps a day. Some days he will nap for 2-3hrs and won’t need another nap in the afternoon.

The newest skill Dex has added to his repertoire is waving and pointing. If you wave to him, invariably he waves back but this skill is very, very new. He has been pointing for a few weeks, but never at anything in particular, although I have noticed the last few days he has started pointing when he wants something. This is a very exciting development for us as it means we can communicate easily together. Dex can get very frustrated at times, especially when he is tired which results in him pinching me on the chest. I even got bitten on the plane the other day, so it’s so important to me that we find an effective way to communicate with each other.

One thing he is still unable to do is clap. He waves his arms around as if he wants to clap when he is happy, but he hasn’t mastered it yet. He is able to grab at my hands and push them together and apart so that they clap, I am betting when I write my next update, this will be another skill he has mastered.

Dexter is babbling away more than ever and using different consonant sounds and stringing them together. Whereas before it would be, ma-ma-ma and da-da-da, we are now hearing, da-ba and ba-na. I am always on the lookout to see if he is calling anything by name. I think he can say water in his own way and he may be saying duck when we have a bath, but I can’t be 100% sure.

I have started dressing him in a few 12-18 month pieces and have put all of the 6-9 month stuff away. Some clothing brands come up massive on him despite his length and other fit very snugly indeed. It really does depend on the shop, so I always have a range of sizes on the go for him.

This month saw Dexter’s first trip on an aeroplane. On the way out he was fantastic and slept for the duration of the flight, the flight back however was a different matter. Even though it was a bit harder on the way back, it has given me the confidence to not be afraid to take him away again. He has developed massively over the past week, just from being in a new environment and seeing and hearing lots of different accents, languages, people and places.

Dexter is still not walking and is afraid to stand unassisted. As soon as I let go, he lowers himself into a squat position. It’s excellent that he doesn’t fall over and has mastered a safe way of getting himself down, but I’m not sure how to get him to be confident in staying stood up which I know he can probably do. He continues to cruise the furniture and crawl as fast as is humanly possible. He likes to play games by taking the dummy out of his mouth, putting it in my mouth and then into his Daddy’s mouth. He also loves taking off my sunglasses and trying to put them back on again. Hours of fun!

His favourite toys this month have been his new V-tech activity table, a plastic set of car keys, teletubby toy and his soft building blocks which he is trying to stack, but doesn’t quite have the co-ordination yet.

It’s quite unbelievable to me that he’ll be one in less than one month’s time. The days just fly by. If you’d like to read about Dexter’s previous monthly updates, you can read them here.