Wow, it feels pretty unreal to be here at the 12 month update, but here we are, what is new this month?

First things first, we have a new teeth! As a regular reader, I am sure you know how many times I have written, wondering when these teeth are going to pop through, especially his upper central teeth. Finally, this week his left upper central incisor erupted joining his lower right lateral incisor which erupted a couple of weeks ago. He now has six teeth! Only fourteen more to go! To be fair, the teeth coming through has not been an issue at all for him, as far as I can tell. We have had a few wake ups in the night, but I feel this is more down to me returning to work than anything else, which I’ll move on to now. 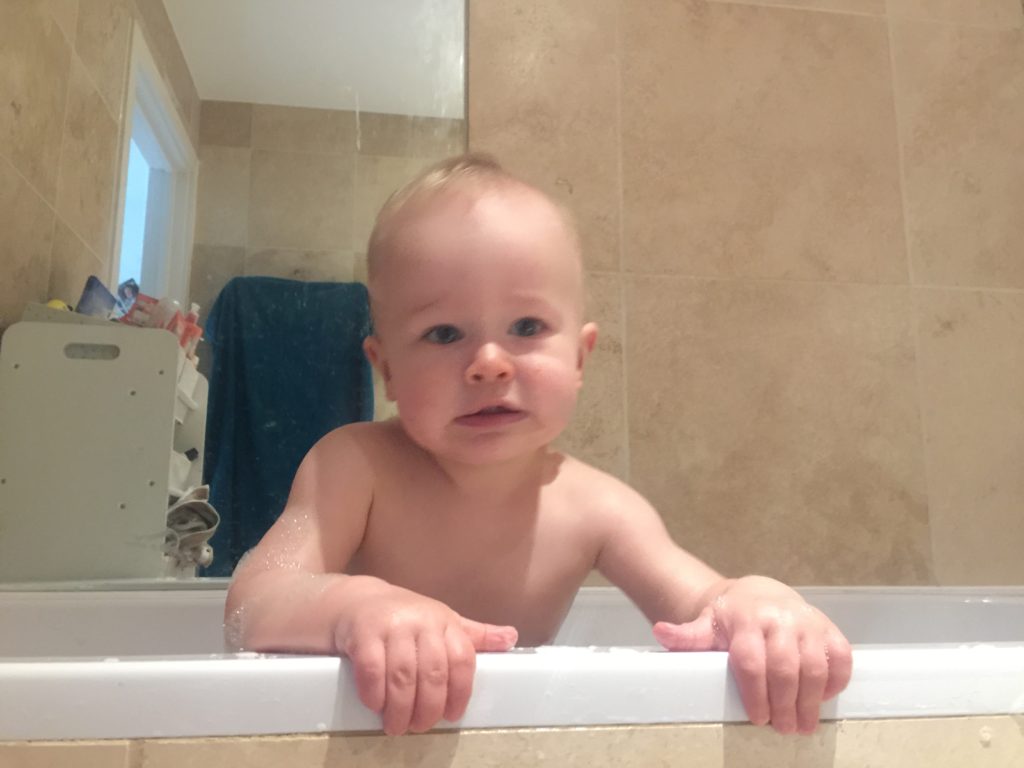 The greatest shift in Dexter’s life has been my return to work. It means he now spends nine hours a day at his Nanna’s house instead of all day with me. I drop him at his Nanna’s at 8am and return at 6pm. We get home before 7pm and have tea together before doing our bedtime routine. He has been waking up at 6am every morning and going to bed at 8pm. It’s quite a long day for him and it did result in a few wake ups the first week I was back in work, although he seems to have settled now.

Milk wise, he has dropped practically all of his bottles. Up until Wednesday I was giving him formula in a bottle before bed and in a cup in the morning. He was also having an afternoon bottle with his Nanna. On Wednesday we ran out of formula and with him turning one this Saturday, we decided to just offer cows milk. He wasn’t too keen on it at first, but we’ve since found out he prefers it cold from the fridge. I have stopped giving it in a bottle before bed and let him drink it out of his Munchkin 360 cup which he uses like a dream. He has 4/5oz and the same in the morning from the same cup. He drinks plenty of water throughout the day and eats three meals along with two snacks. 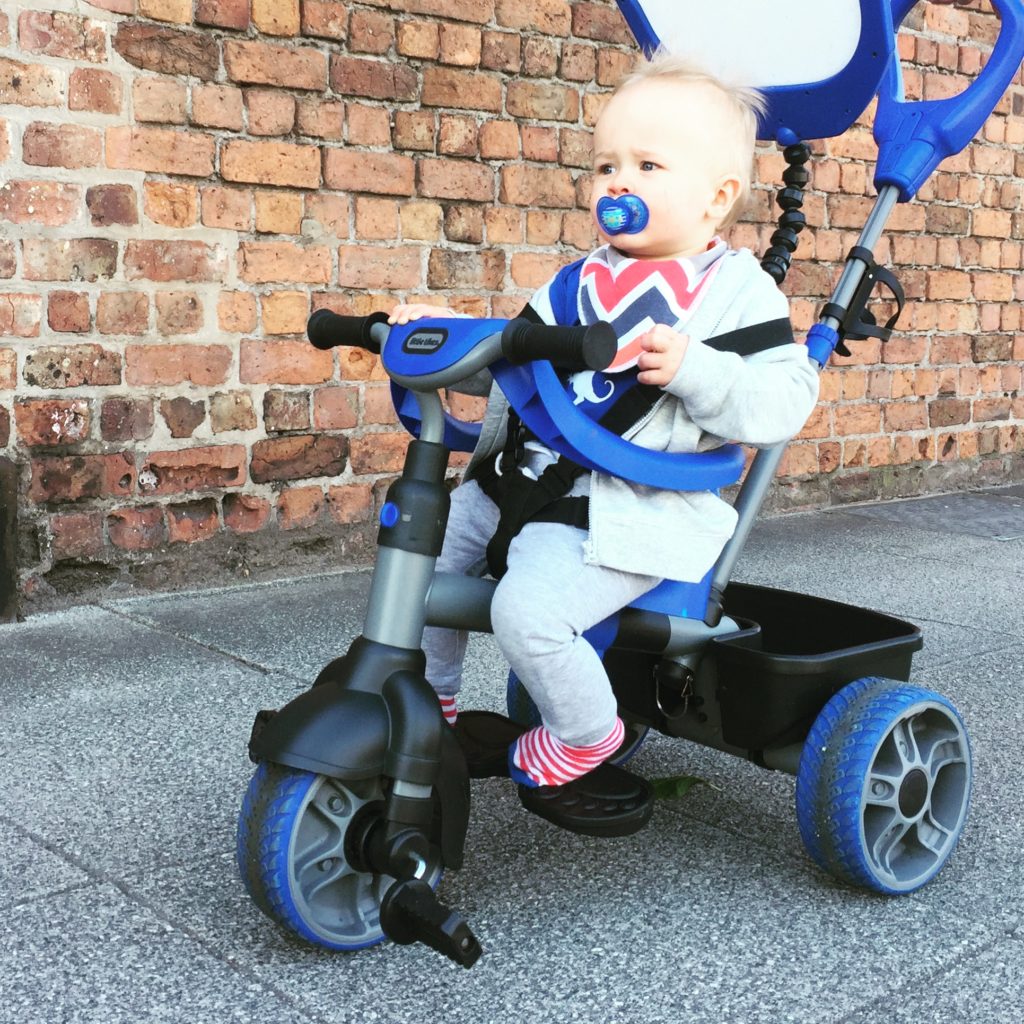 His latest skill is clapping! We have waited so long for this milestone and he finally started clapping on his 1st birthday. He can now clap, wave, point and shake his head. His walking is coming on leaps and bounds and he can independently walk between two structures if the gap is relatively small. He cruises up and down the sofa all day long and is as quick as lightening when it comes to crawling. He doesn’t like to walk if I hold his hands/arms above his head, but will do it if others try. He loves getting into a downward dog position to try and get into his feet and enjoys pulling himself up to standing whenever possible. His latest trick is coming over to my legs and pulling himself up so that I will bend down and pick him up. 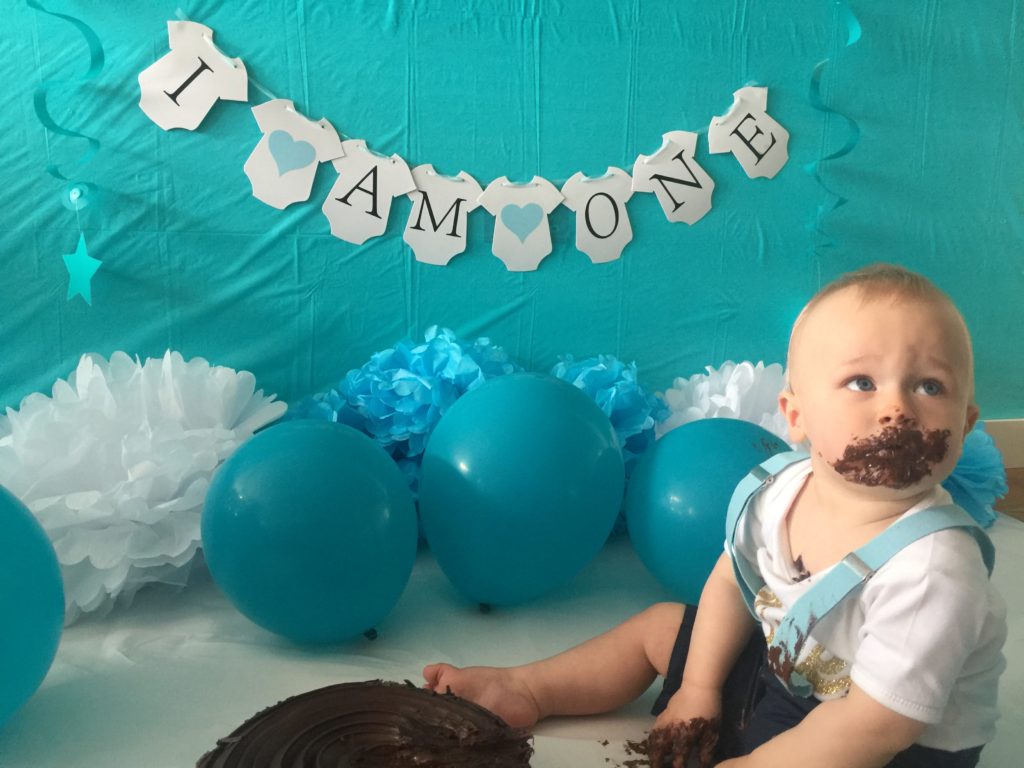 He has started to open up drawers and pull everything out before attempting to put things back. We also noticed this week that he was trying to tell us his brown bear was the same as the brown monkey sticker on the wall. He is obsessed with the smoke alarm and points at it constantly. He also loves lights and points and shouts at the light switch, basically asking us to turn it on, before switching his gaze to the light to watch it illuminate. He loves switches and will try and reach them whenever he can, even if that means crawling over to me and trying to stand on my shoulders. He is tall enough to reach the door handles and can open doors with ease if you let him. He understand about trapping his fingers and opens cupboards using his fingers to drag the drawer open from the top before shutting it by pushing it with his hands.

Dexter is still a massive fan of his dummy and finds it impossible to settle to sleep without it. He also loves his Sleepytot bunny and really does rely on that for sleep. His favourite pastime is having a bath which I try to do with him most days. His favourite toys have been his Baby Einstein keyboard which I took off his Jumperoo, his Dipsy Tellytubby toy, a set of plastic car keys and a plastic remote control which speaks three languages.

You can read about Dexter’s previous updates here.

Happy Birthday to Dex for the other day. What a big month for him; new teeth, walking and CLAPPING! Can't believe he's taken to cows milk so well as well, that's excellent. Big month of adjustments for Mummy too with work but sounds like you're all taking it in your stride x

Thank you D! He is doing better than I ever could have imagined and finally has a 'normal' smile now his teeth have come in!! No more fangies!