It’s been 19 weeks since I returned to my job full time after sixteen months of maternity leave, and despite all my worrying and moaning that I was dreading it, I am actually loving it.

It’s been tough, don’t get me wrong; the early morning wake ups, the long commute into work (although nowhere near as bad as my old commute), being away from my baby for nine hours plus a day and dealing with difficult situations in the workplace, but on the whole, I’ve loved being back.

This week Dex started at a childminders in the town I work in.

I was super lucky that for the first thirteen weeks I was back in work, my mother in law had Dex for us. We didn’t have to worry about paying childcare costs which was great, but it did mean an extra hour of driving each day, which is tough when you already have limited time with your growing baby. My husband is a teacher so for the following six weeks he has been at home with Dex, but this week he too returned to work. 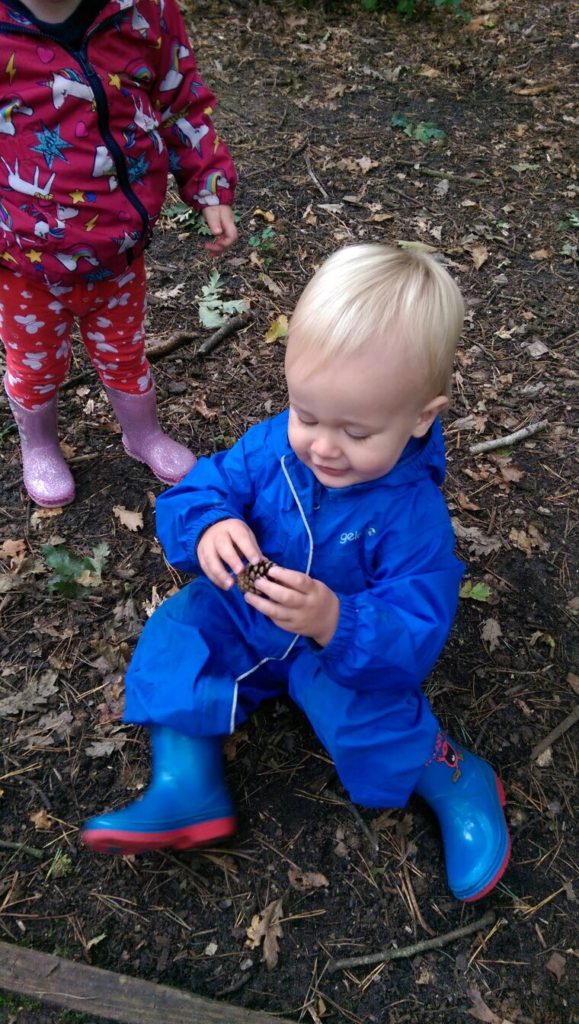 I thought I’d find it really difficult to find someone to look after Dex, but Sarah was one of the first people I found online and reading her website and her incredible OFSTED report meant I was sold before we’d even met. Meeting her simply confirmed how perfect she was going to be at looking after our precious boy, and although it sounds silly, I well up every time I think about him going there because I KNOW how well looked after he will be.

So, one week in, what have I learnt?

1. He has grown up overnight.

Being around other kids has always brought the best out in Dex, but shamefully I didn’t do much with other people during my maternity leave. I first picked up on this during our holiday to Majorca where he was fascinated by watching the other children run past him. Since he’s been at Sarah’s he has become more gentle and he is trying to say more words. The majority of the kids she looks after can talk and this will only help Dex with his language skills.

2. He CAN sleep through the night.

For the past six weeks, we’ve had nothing but problems with Dex sleeping through at night. I hate to admit it, but hubby wasn’t following a strict routine during the day meaning danger naps and overtiredness. (Hey! It’s tough being a stay at home parent!) Since Dex has been at Sarah’s he is sleeping through without waking once and it is a godsend. I finally feel human again. As a manager, you always have to show the others you are motivated and at your best and this can be so exhausting when you’re really not. Luckily I have very supportive staff who have been there to pick me up when the mask has slipped! 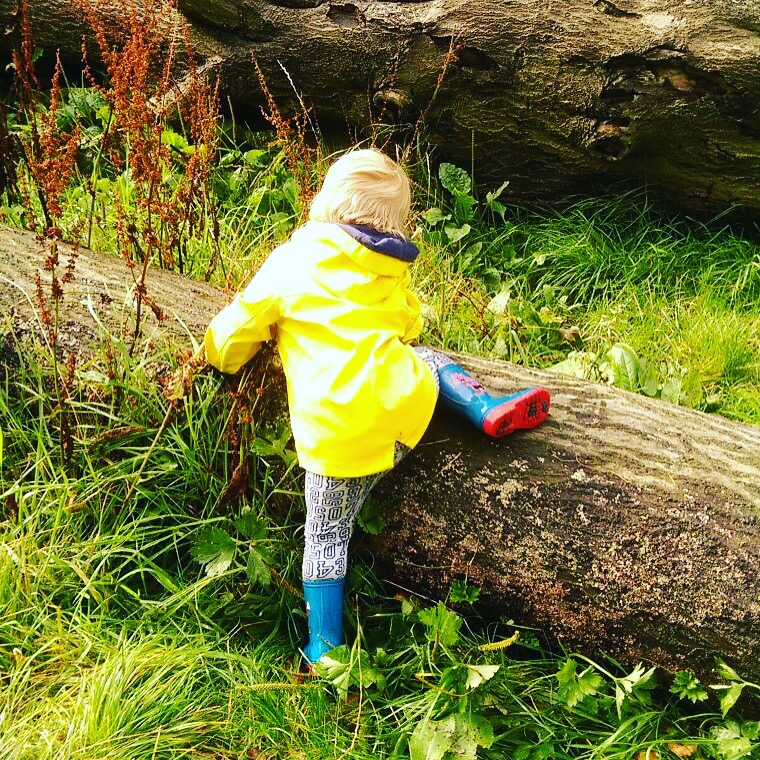 3. Childcare doesn’t cost quite as much as you think.

I had been dreading paying for childcare because we are told so often that a lot of women barely break even and it is pointless them returning to work. Fortunately, with my husband being a teacher, we only need term time care which reduces the price drastically. What’s more, we are both entitled to tax free child care vouchers which are taken directly out of our salary. The vouchers are worth £243 per person, but we’ve lost less than £150 each from our take home salary. The remaining balance spread out over twelve months equates to £60 odd per month which is covered by our child benefit. Dex now has the majority of his food at Sarah’s as well which of course reduces the cost of our weekly shopping.

4. Seeing your baby reach for another woman is a heart wrencher.

I’ve always known Dex was super independent. Whenever I take him to the park or beach, he is off without so much as a backward glance in my direction. He had two small settling in sessions with Sarah and didn’t cry once. Last Friday, I dropped him off and he was a little unsettled in the car. Unfortunately, I don’t have much time to turn and pacify him during the commute and when we arrived at Sarah’s he wrestled out of my arms, toddled over to her and reached up wanting to be picked up. I am not ashamed to admit that I had to leave as soon as I possibly could with tears in my eyes.

5. Your toddler WILL get sick.

Yeah, yeah, we’ve heard it all before. You send children to daycare and they catch every bug going. It’s not a joke. First we had three soiled nappies on Thursday followed by a monstrous poonami on Friday morning; I was seriously considering ringing up and saying he’d stay home. By Friday evening, I collected a child who resembled a small snot monster and this is a kid who NEVER gets snotty. He’s a cold ONCE, in sixteen months. On the drive home I counted fifteen sneezes in between listening to him suck snot off his lips. One Calpol plugin, two snufflebabe vapour rubs and three steamy baths later and he seems, fingers crossed, to be over it, but jeez, really? A full blown cold on the first week?! 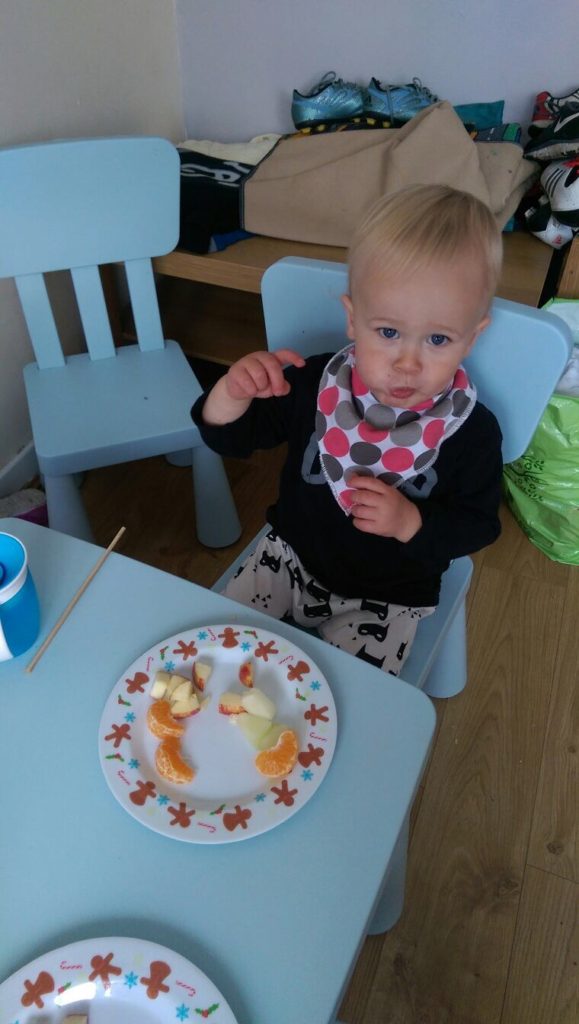 So there we have it, one week in childcare. He has done so much this week, it actually feels like he’s been there forever. I am so pleased in how well he’s settled in and how happy he seems in all the pictures I get Whatsapped during the day. Most of all, I am so happy we made the decision to put in him Sarah’s capable hands and we are so excited to watch him learn and grow over the next few months.

Does your child go to nursery or a childminder? How do you find it? 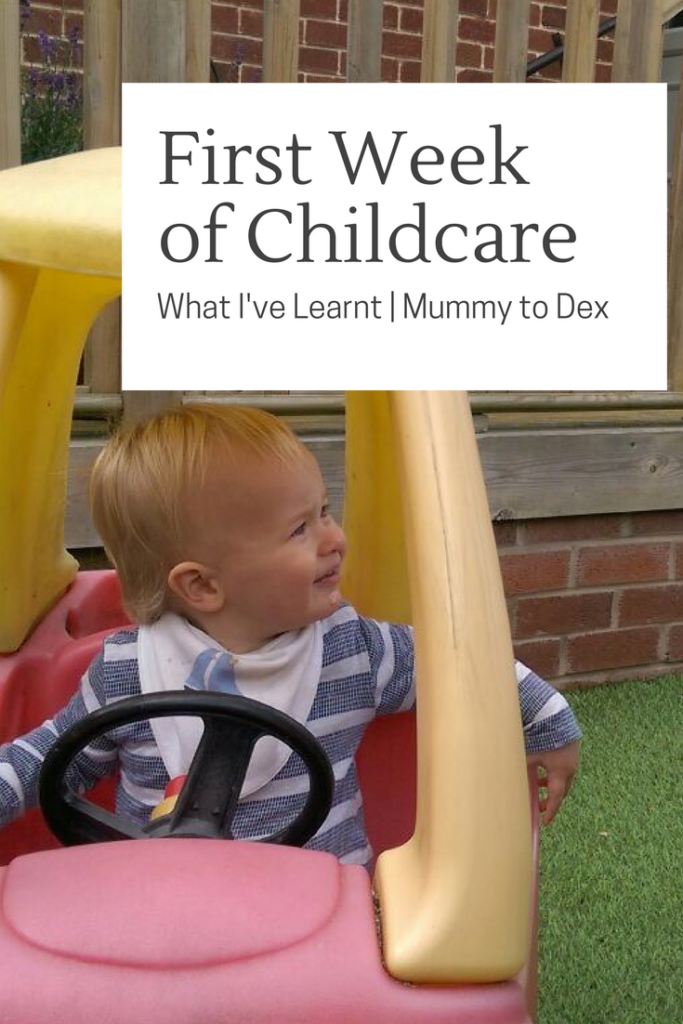 My number one piece of advice to people is to find great childcare and it looks like you've found her. It just makes everything so much easier for both you and Dex, although I know exactly what you mean about them reaching for someone else... isn't it just heartbreaking? I try and focus on the fact that it means he's clearly happy there. Welcome to the world of ALL the illnesses!

Great post hun! My daughter started nursery last monday and i was dreading it, i'd only had family or close friends looks after her so I was mainly worried that they didn't know enough about her, but she loves it. No bugs or anything as of yet thought thank god!

I'm so glad you found someone as wonderful as Sarah. Knowing that he is out and about with other kids must be so good. As great as grandparent childcare is sometimes they just don't have the energy or social opportunities as someone who looks after children as a profession. My heart goes out to you thinking about him reaching out to someone else. Breaks my heart everytime my little one does this. They just like to keep us on our toes :) x