When I was pregnant, I had a huge fear of giving birth. If my husband could use one animal to describe me, it would definitely be a camel sticking her head in the sand. This is my coping mechanism. It got me through pregnancy; but every so often, I’d have a little panic.

I used to watch episodes of One Born Every Minute over and over. The latest seasons are set in the hospital where I was to give birth and I felt like it gave me some control, some awareness of what would happen.

Of course, nothing can truly prepare you for child birth. No matter how many people tell you about their experiences or how many birthing videos you watch on YouTube. Every labour and birth is unique.

I went into labour two days before my due date. I woke up at 4am with mild period type pains which would wash over my stomach and then fade away. I have always suffered with terrible periods throughout my life. When I was in my teens, the pain would wake me in the night and leave me moaning in pain until my Dad ran downstairs to fetch me paracetamol and ibuprofen. The pains I was experiencing on the morning of May 19th were nothing like these. They hurt, and they had woken me, but I was able to grab my own paracetamol from the bathroom cabinet and try and get a couple more hours of sleep. 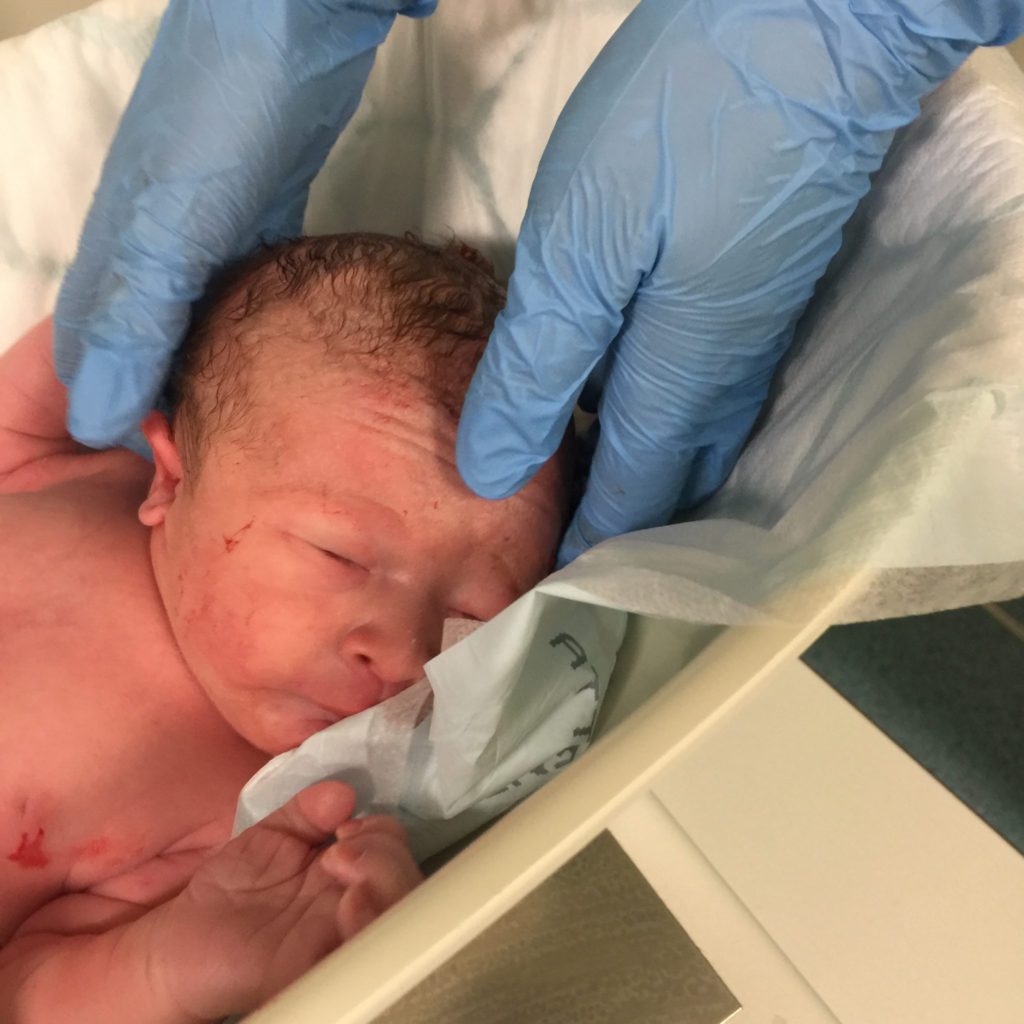 When it was time for my husband to get up for work, I mentioned the pains. I was well aware that these waves were coming and going, instead of being a constant ache like my usual period pains and he suggested he stay at home; that today could well be the day.

I actually started to feel a little bit excited. I thought about the fact that I just had to get through the next 24 hours. In 24 hours it would all be over. I’d have my baby. The pain would be gone.

I spent the day on and off the exercise ball, in and out of the bath and up and down the hallway of our flat. The contractions stayed at three minutes apart for the majority of the day. We rang the hospital several times but they insisted I had a long way yet to go.

We tried to watch TV but I couldn’t concentrate. My husband tried to make me eat, but I wasn’t hungry. I didn’t even pick up my phone to scroll through Instagram or Facebook. The day dragged on and on and the contractions stayed the same length apart.

In the early evening, the pain started getting quite intense. I began bleeding with every contraction and I couldn’t bear to be touched. Once again we rang the hospital but they said not to come. My husband was not in the least happy and told me we were going in anyway. I tried to gather a few things together that were missing from my hospital bag, but gave up and hobbled down to the car. It was the longest fifteen minute drive ever. Every traffic light seemed to turn red as we approached them. I had about six contractions in the car and then a further two in the car park before finally entering Liverpool Women’s Hospital. 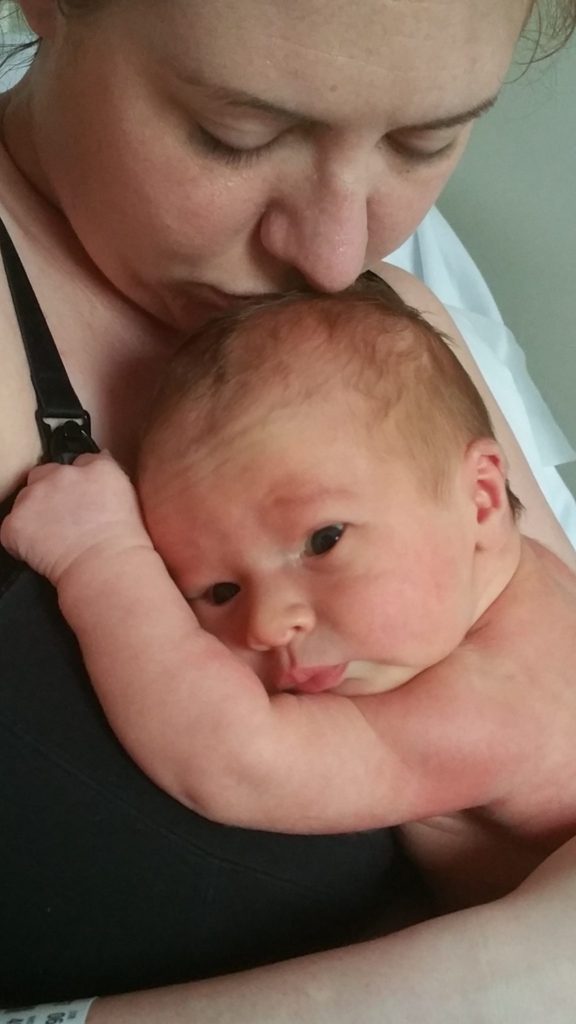 We slowly made our way up to the labour ward, stopping every couple of minutes for me to breathe my way through a contraction. When we arrived at the labour ward, we were told to leave and go to the maternity emergency room.

The waiting room was packed full of women who were about half way though their pregnancies. I walked in and a contraction suddenly started hurtling its way through my body. I tried to breathe through it but it hurt so much. I started swearing and after a few seconds it passed. I apologised to the room. People looked away awkwardly. I had put on a hell of a show.

A midwife came to me and took me aside to look in my knickers at the blood I had lost before putting me in a side room and doing an internal examination. This was beyond a shadow of a doubt the most painful part of the whole labour experience. Being examined internally without gas and air was excruciating. After a really long twenty seconds she stuttered, “Oh right, yes, you are 8cm dilated. What pain relief have you had?” I replied, “Two paracetamol at 4am.”

“Right, well yes”, she said, “Let’s admit you to the labour ward and get you some gas and air right away!” 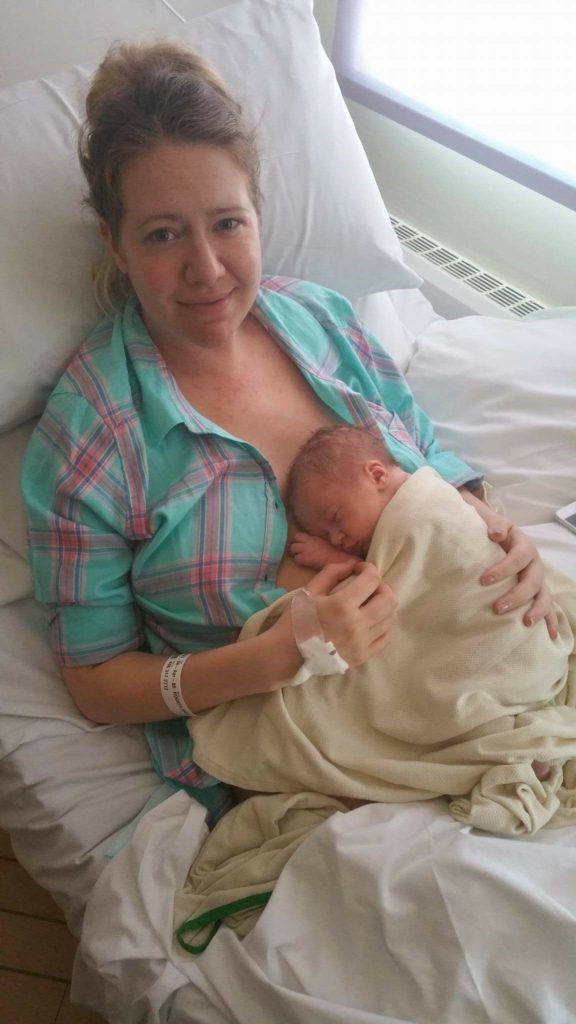 I was over the moon. 8cm! I had been so fearful that I was in a considerable amount of pain and I would only be 3 or 4cm. My husband and I rubbed our hands with glee. This would all be over shortly!

I was shown into a dimly lit room with a huge birthing pool already filled for me. Our midwife came and introduced herself and had a quick look through my birth plan. I had chosen to not use any pain relief like diamorphine or an epidural and to have as natural a birth as possible.

I entered the pool and started to suck on the gas and air everytime a contraction hit my belly. The next three hours passed by rather quickly. The gas and air helped me so much to control the pain and Neil and I laughed and talked about what would happen next.

Just before midnight, my midwife returned to check on me. She asked me to get her a urine sample but when I tried to pass urine, I found I couldn’t. The walk to the bathroom had been a struggle and I felt really cold from having to leave the pool. I started shaking quite uncontrollably and started telling Neil that I was ready to go home now. Even though I had read a lot on the subject, I wasn’t aware that I was going though the transitional phase. I was given a catheter to remove the urine from my bladder to ensure it wasn’t impeding baby’s exit then the midwife did a check of my cervix. She wasn’t sure if I was fully dilated or not. She could feel something but she wasn’t sure it if it was a remaining bit of cervix or baby’s ear. After discussing with her superior, she decided it was time to start pushing.

I pushed for around two hours, although it felt like 20 minutes. I tried lying on my back and I tried squatting. Nothing worked. I vomitted several times. Eventually I was told a doctor would need to come and assess the situation. I was scared but also felt relief that this whole thing would be over very soon. They kept telling me not to be upset that I couldn’t do it myself.

They were unsure if I would need a C-section or just an assisted delivery. When the doctor arrived the whole atmosphere changed dramatically. I was taken into a room with sharp lighting and lots of people. I was in too much pain to care what was going on. The doctor put me at ease immediately; he knew exactly what to do; I would be having a ventouse delivery.

The doctor explained everything he was doing and clearly told me what I needed to do; push on the next contraction while he would help deliver my baby. When it came, I pushed with all of my might and the baby’s head was delivered. We waited a few minutes for the next contraction, then I pushed again and the baby came screaming into the world and placed on my chest for immediate skin to skin. Dexter James was born at 3.07am on 20th May 2016.

Because the pushing phase had lasted for so long, Dexter had to be examined by a paediatrician. The two midwives counted how long he remained attached to the placenta for (two minutes), then handed the scissors to my husband for him to cut the cord. Once this was done, he was handed over to the doctor for a very quick check over and to be weighed. 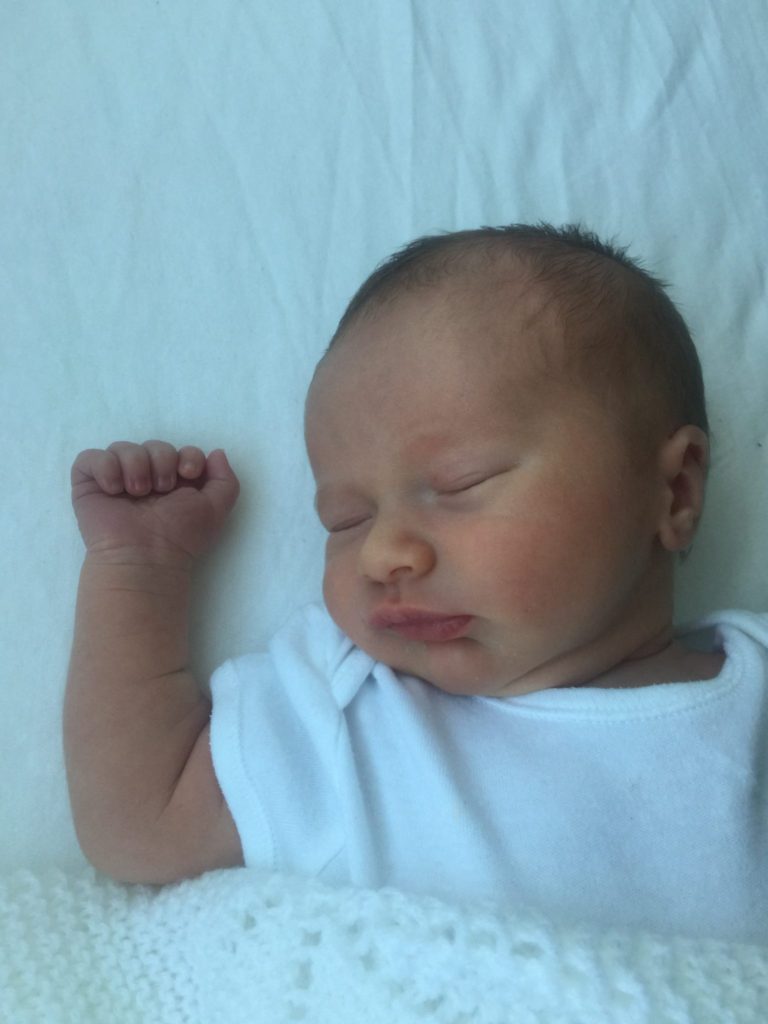 Meanwhile, my placenta was delivered after an injection was administered into my thigh. This process was very fast and relatively painless.

Now my baby was back in my arms and we snuggled together so serenely. Nothing has ever felt so perfect as those first moments we spent together as a family.

Having your baby placed in your arms after carrying him for nine months is nothing short of surreal. We spent the next few hours curled up together whilst I tried to get him to breastfeed. I hadn’t slept in 24 hours, but I didn’t care. All I wanted to do was to hold my baby and never let him go. I still feel the same nine months later.