It’s been a real whirlwind of a month with Dexter changing beyond all recognition! I cannot believe how he has developed within the space of a few weeks; he is really turning into a little boy now instead of a baby.

His sixteenth tooth arrived this month leaving us with only four molars left to pop through. He is still loving brushing his teeth standing on his stool at the sink and also loves washing his hands as well. We didn’t have any bother with the tooth popping through, one day it magically appeared after I suspected it could be on its way due to him being a bit ‘bitier’ than usual.

He has really found his singing voice these past few weeks and loves singing Twinkle Twinkle and Wheels on the Bus. With the latter he can say a few of the phrases like ‘up and down’, ‘swish, swish, swish’ and ‘chatter, chatter, chatter’ and loves attempting to do the hand movements as well. He also really likes ‘The Cat and The Fiddle’, ‘Three Blind Mice’ and ‘Hickory Dickory’. 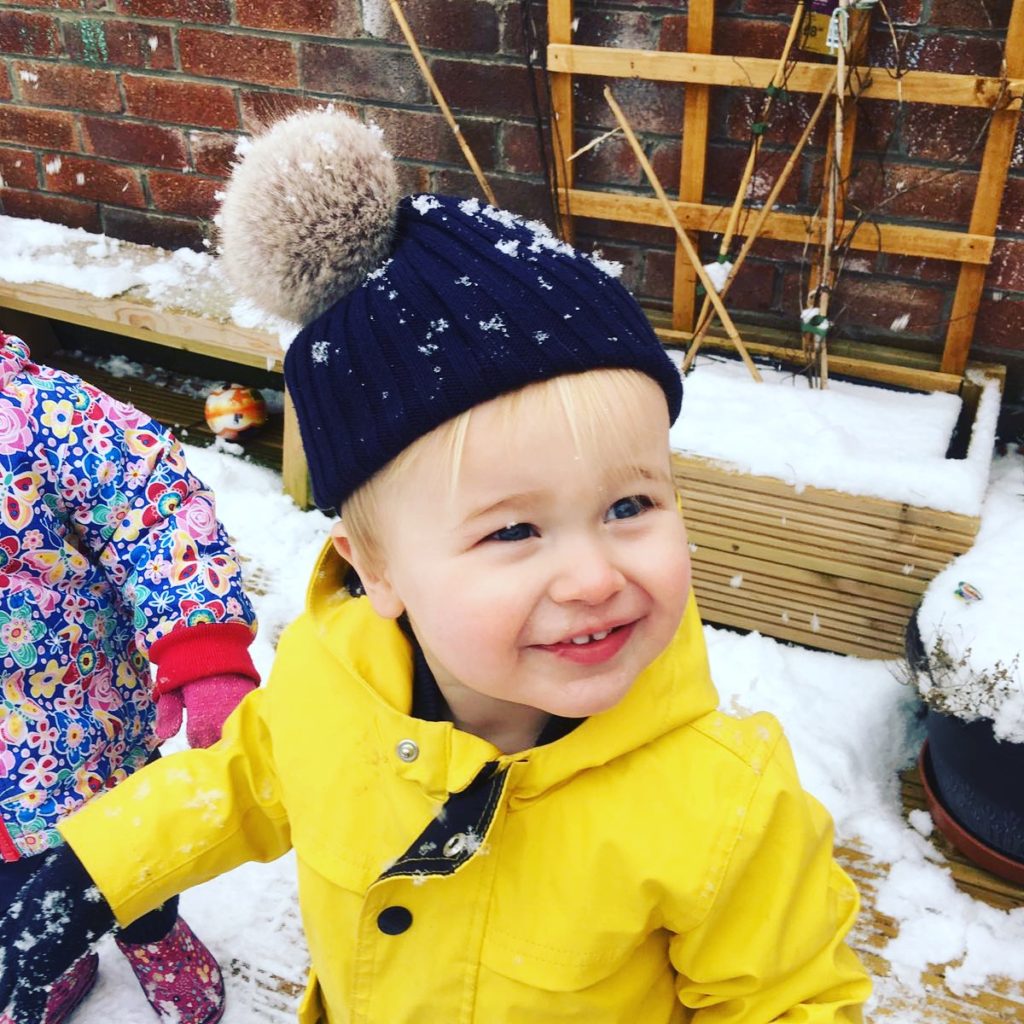 His new favourite game this month has been pointing out his body parts if I ask him where they are. He can point out his nose, chin, ears, hair, head, knees, hands, toes, feet and his favourite is his belly button. A few times a day I try to ask him where all his various body parts are and try to introduce a new one for him to learn. We also have a flap book which shows various body parts which he loves me reading. He will come and sit on my lap and loves seeing me point out the parts on his body before trying to copy the word and touch the body part himself.

He had started calling people by name and finally he realises that my name is Mama (although he still calls me Sarah from time to time). He also loves shouting his Daddy (or Didi) and loves phoning his Grandma.

He has started communicating really well and the number of words he can now say has jumped drastically from around 40 to over 100. I keep a list on my phone which comes in helpful when one of us doesn’t have a clue what he’s trying to say. New words this month include: finished, bag, poo, shampoo, toothpaste, wheels, chips, Dexter, pasta, spoon, hot, down, out, tea, tree, mine, hat, cat, chair, door, night-night, glasses, clock, milk, duck, more, no, snack, plate, morning, cup, high-five and oh-no! He has also stated making simple two word sentences including ‘bye-bye Didi/Mama’ and ‘What’s that?’ He has also started repeating EVERYTHING he hears and will give most words a go. He knows how to ask for more food, a drink and to go for a bath. He makes it clear when he’s ready for bed by telling us ‘night-night’ and loves nothing more than turning all the lights out himself using his stool. Everyday a new word or phrase has appeared and it’s been absolutely amazing! 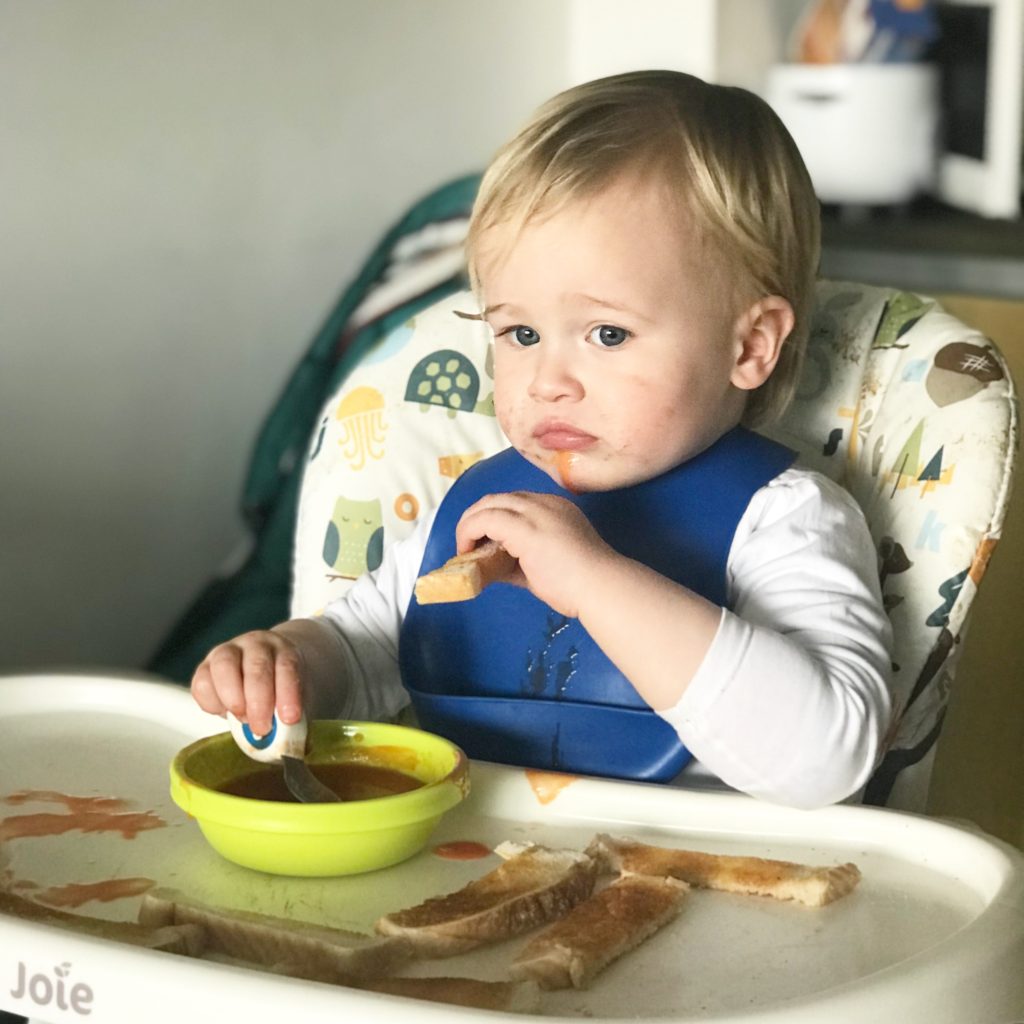 Food wise he is still eating enough to feed a small family and his latest skill is drinking out of an open cup. I bought some small plastic ones from Ikea and he has milk in it as part of his afternoon snack which he carries from the kitchen to his table very carefully before slowly sipping out of it. The first few times he made a few spills but he quickly learnt that he had to take it slowly and steadily.

The final skill of the month is he has learnt how to tell us when he has done a poo and will go and sit on his mat ready to be changed. Some tell me this means he’s ready to be potty trained so watch this space. At first I thought it was a coincidence but after the fourth time I realised that it was not and he was indeed telling me ‘POO!’ everytime he had done one. 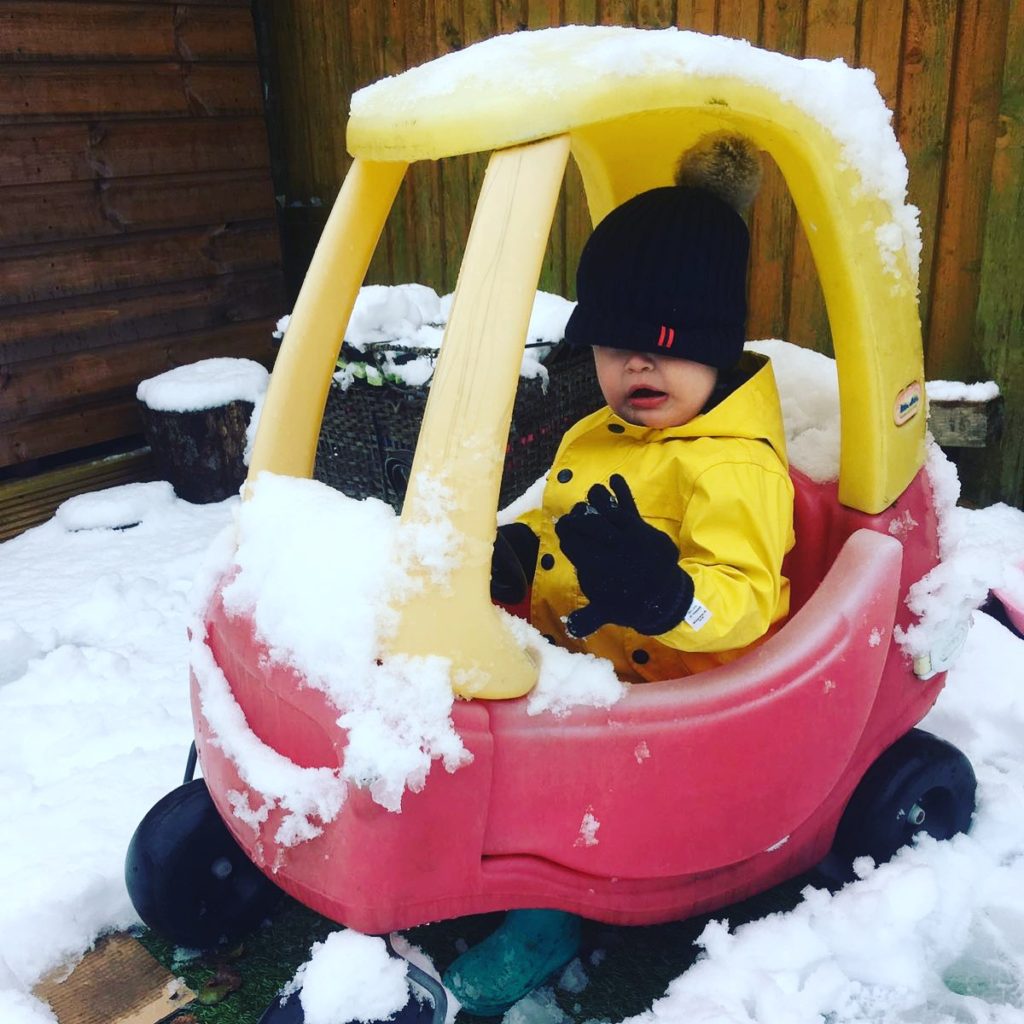 He has been sleeping like an absolute dream having a couple of hours nap each day and sleeping 7pm until 7am every night. We haven’t had any battles at bedtime with him happy to go down most nights as long as he has dummy, bunny and a (closed!) cup of water.

His favourite activities this month have been colouring in which he does at his little Ikea table, playing with his V-tech garage and cars, reading and going out for walks. We have been taking him out without the pram and using reins if walking about in the city. Whenever we go to a park we let him roam ‘free’ as he usually is very good and stays close by holding hands.

He has been an absolute treasure this month and it’s been amazing to see him develop so quickly. I really can’t wait to see what month 23 brings and I really can’t believe that my tiny baby will be in two in two short months!

From baby to boy is such a leap isn't it and I'm still in denial about my baby turning 2 this month! Luca also loves singing and twinkle twinkle is instantly recognisable albeit with new lyrics " ba ba ba ba ba ba ba". L has a lot fewer words than E did at this age but I should start to write them down and make a wordle of them, it's a lovely way to remember them. If you go on to have more children you will forget these moments and blogging is just the best reminder :0). https://nipitinthebud.wordpress.com/2013/04/19/first-words-wordles/