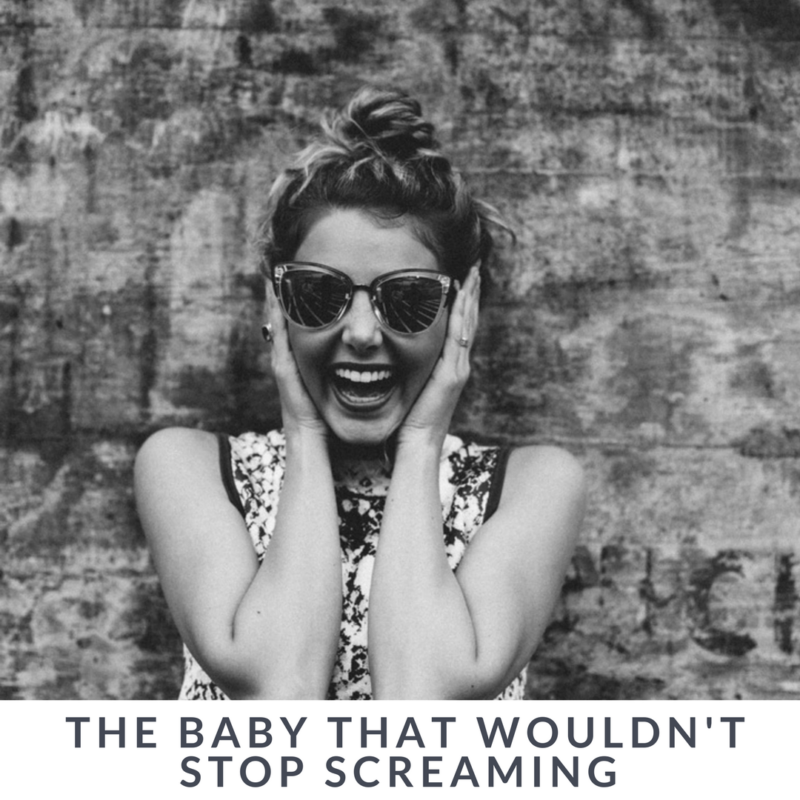 I can’t pinpoint when it began. I can’t be the only one who only knows what day it is based on whether my husband is in work or not, can I? Sometimes it feels as if something that happened yesterday happened two weeks ago, and sometimes it feels like something that happened two weeks ago happened yesterday. Time becomes such a strange entity when you are on maternity leave.

Anyway, I’m not sure exactly when it begun, but it felt as if it had been going on for weeks. I’m talking about the most horrendous, toe curling, high pitched, stomach churning, blood curdling screams. Screams that are so shrill that my ear drums pulsated and my heart skipped beats. I do not understand how such a deeply penetrating noise could come from such a small child. But the screams came, and they wouldn’t stop.

It didn’t matter where we were, what time it was or what sort of mood he was in; the screaming would begin and there was nothing that could be done to stop it. I tried so many methods to make them cease. Of course, when they first started, I presumed he must be in an overwhelming amount of pain. I gave him Calpol, Baby Neurofen, teething gel and teething powders. I could see his baby teeth buried underneath his gums and assumed this is what was causing so much pain. However, days passed and the teeth didn’t erupt. The screaming didn’t stop despite him being more drugged up than Pete Doherty.

Perhaps he was hungry, I told myself. I offered him bottles which he pushed away angrily. I tried water in a cup. He took a few sips then defiantly spat it out before throwing it on the floor. I offered food; Kiddylicious wafers, melty puffs, soft biscuits and bits of cheese. It halted the screaming for a few minutes while he devoured what was in front of him, then the shrieks started again.

I tried distraction. Offering him different toys, or moving him to a different room in the house. The screaming continued. I tried taking him out in the car, but had to turn around before we’d even got 500 metres down the road. There was no way I could concentrate on driving with all the heart stopping, piercing screams that were coming from the back seat. Each evening, we drove to pick up his Daddy and the screams were enough to make me want to throw him out of the car.

The screams stopped concerning me and started to irritate me. Really irritate me. It sounds awful doesn’t it, but I was beginning to not like my child very much at all. We knew there was nothing wrong with him, that he didn’t need anything and we became terrified of responding to the screams incase he learnt that this was the way in which to get our attention. We began to turn our back each time a blood curdling scream left his mouth. We praised him each time he called to us in a different way, either by babbling da-da or even crying. Yes, we praised crying. Crying was a relief at this point. What sane person would want their baby to cry? One who has been driven to distraction by god awful screams, that’s who.

My patience had grown so thin. There was one incident where Dexter and I were in the car and I was quickly checking my phone before getting him out. He started to scream and I couldn’t concentrate on a pretty important email I had received. I lost it and I screamed in sheer frustration. I turned around expecting him to be bewildered and upset. I felt disgusting. He stopped screaming for a second and looked back at me inquisitively before reacting with a scream even bigger than the last. Losing my temper and reacting this way wasn’t going to work either.

The afternoons were long. Dexter will only take one nap a day, which he insists on taking as early as 9.20am some days for as little as forty minutes. The long stretch of awake time between 10am and 7pm was slowly killing me. Each three minute period that passed was marked with a stomach churning scream. I don’t feel as if I am exaggerating when I say that it was worse than experiencing contractions. At least when I was in labour, I knew there would be an end to it. I  felt physically and mentally drained. Most nights I fell into bed not long after he went down for the night and slept straight through to the next morning and yet still felt as if I could sleep for a week by 1pm the following day. The screams have truly felt like mental torture.

Yesterday it stopped. I didn’t dare believe it was true until this afternoon when I realised there had been no screaming today either. Could we be at the end of it? What on earth was causing it? There are no new teeth and my Wonder Weeks app tells me we still have another nine days left of Leap 7. Whatever it was, I cannot express how thankful I am that it is over. I am scared to admit the truth incase it starts again but my heart has started to find its normal rhythmic beat again.

From talking to other Mums, I now know that this is normal, despite failing to find anything about it online. If you are going through something similar: screaming is normal for babies as they practise using their vocal cords and testing how to get your attention, and it will come to an end. Eventually. It’ll just feel like it lasted forever and a day. In the meantime, pop some nursery rhymes on the TV (we had one peaceful hour every morning whilst he watched TV in the Jumperoo) and invest in some earplugs. Although, I reckon you’ll still be able to hear the screams through them.

Did your baby go through a period of screaming non stop causing your ear drums to burst? How did you get it to stop?