We’ve had an incredible seven months, but like all good things, our co-sleeping journey had to come to an end eventually.

Before he was born, I thought he’d be in with us for six months. When he got here, I didn’t ever want him to leave.

It’s had its highs and its lows. It’s felt like our bedroom had always been shared with Dex.

This week Dexter moved into his own room. Our co-sleeping journey ended. 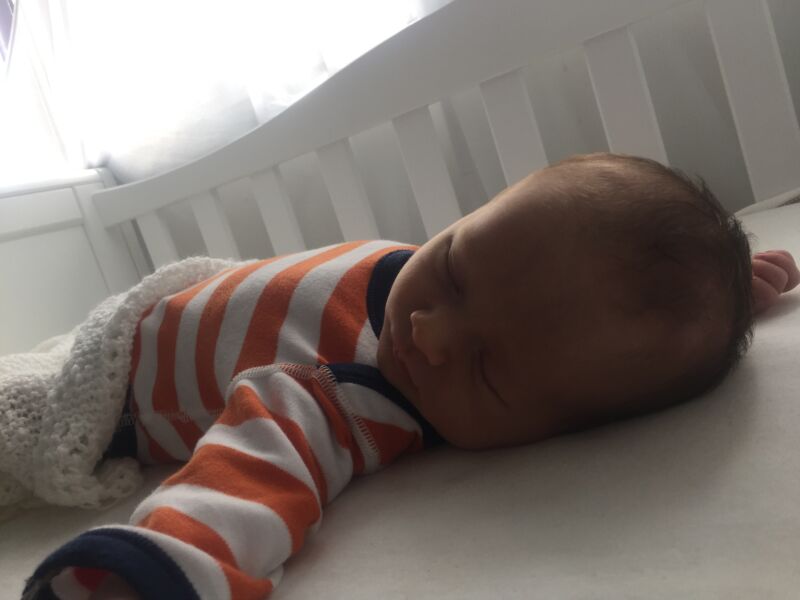 Even though I had been ready, I was still nervous about the transition and wondered if his moving would actually make my sleep any better. After all, the main benefit of co-sleeping was that he was right next to me if he needed his dummy.

Let’s back up a bit. I decided when I was pregnant that Dex would be in our room with us. Obviously the risk of SIDS is minimised if baby sleeps in the same room as you. I was adamant I would breastfeed and then started reading up about the benefits of co-sleeping. My husband set up the cot with one side down and I put it against the wall and pushed our bed up alongside it. I stuffed blankets down the other end to minimise the gap, making a safe environment for baby to sleep on.

Breastfeeding didn’t work out for us and for the first few weeks I was scared. The benefits of co-sleeping are plenty when breastfeeding, but according to research, formula fed babies are more at risk of suffocation. The reasons behind this being that baby sleeps more deeply (bullshit); Mum sleeps more deeply because her body isn’t making the bonding hormone now she is not producing milk (bullshit) and formula feeding mums and more likely to have baby face to face instead of chest to face and baby could then suffocate on a pillow. This final piece of research could be true but because I’d read it, I always made sure Dex was well away from my pillow. As for the first two pieces of research, Dex woke multiple times per night as a newborn and every movement he made, woke me too. 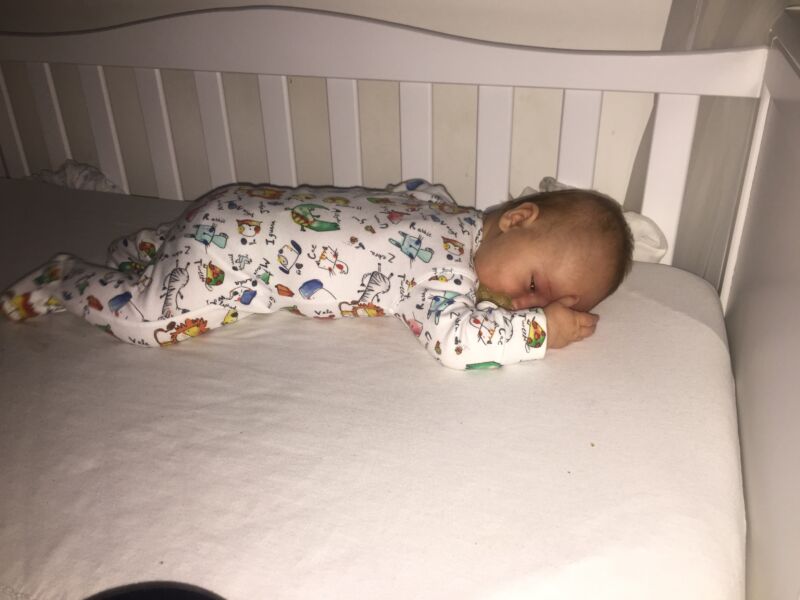 Co-sleeping worked great until he turned twelve weeks old and started rolling. Yep, you read correctly, he was twelve weeks old. People dismissed me and thought I was showing off. Trust me, it was nothing to brag about. It was scary. He would roll from back to front towards my bed and didn’t know how to get back over. Luckily he had a really strong neck and was able to turn his head to breathe.

When he hit seventeen weeks old and I knew the risk for SIDS was massively reduced, I started to relax a little with his rolling. He was also now able to roll onto his back and he often rolled a few times towards the bed or we woke up with his head on my stomach. I loved the fact that I could reach over and comfort him in the middle of the night and replace his dummy if he needed it.

By twenty five weeks, I would wake up with his head near my feet and I started panicking again. He was so close to crawling and could pivot and roll his way around the cot. We used pillows to trap him in his cot but of course I worried he would suffocate on them. I thought about a bed guard but there were other issues. 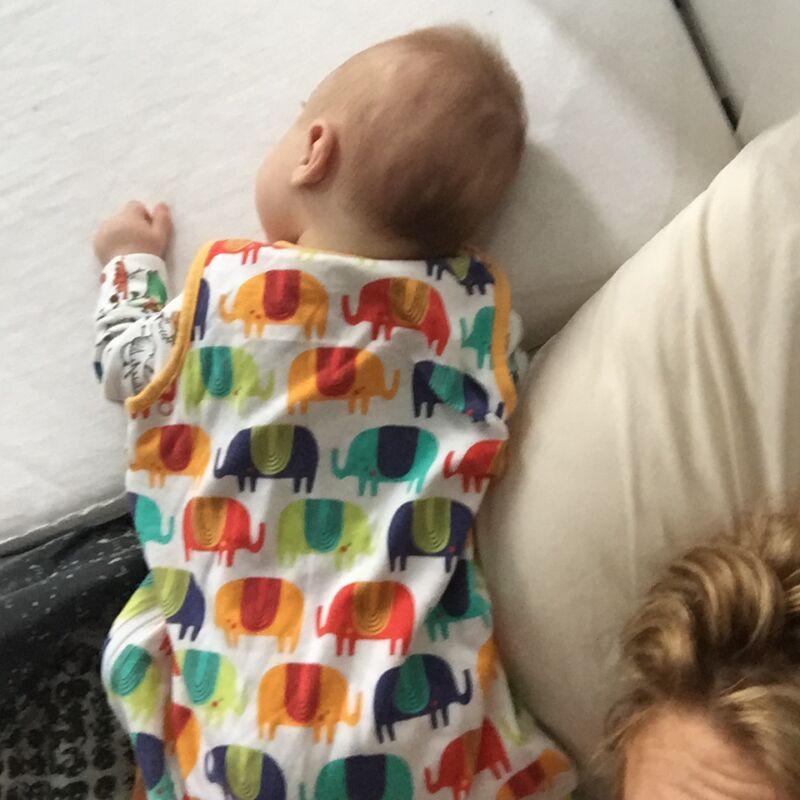 Every morning, my husbands alarm goes off at 6am, even on the weekends. Naturally, this woke Dexter up and he would not go back to sleep. Very occasionally, Neil doesn’t have to get up for work or a bike ride and Dex would sleep in until 9am. I knew this 6am wake up was too early for him. On top of this, I am sure when he woke in the night, seeing my face kept him awake longer.

On Monday we dismantled the cot and put it back up in his nursery, all sides intact. I placed Dex inside it and he scooted around it happily. I sat on the floor next to him and he put his hand through the bars to touch my face. He seemed more ready than I was.

The first night he dropped off to sleep as if nothing had changed, even though for me I felt like nothing would ever be the same again. I wasn’t at all surprised as we usually leave him to drop off alone in our bedroom. He slept through until 10am (apart from a dream feed at 12). When I walked into his room the next morning he was lying there beaming back at me. It was the same beautiful smile I got every morning when I first opened my eyes, but now I needed to walk a few paces to see it. 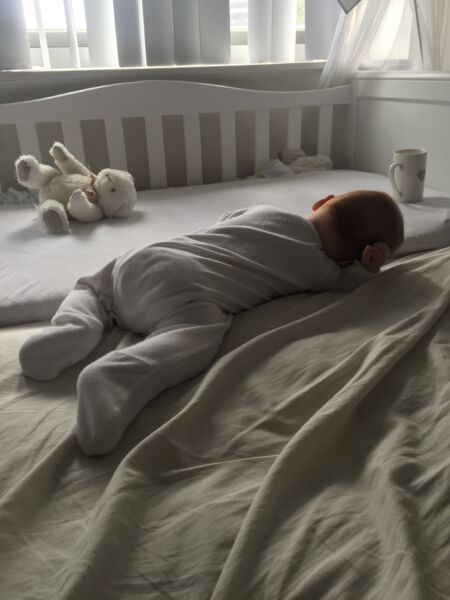 Since the first night, he’s had a few wake ups. It’s usually to have his dummy replaced. He is very good at dropping them down the side of the cot so we have invested in a Sleepy Tot. (Naturally, I will let you know if it works!)

I miss him terribly, but at the same time I feel free. I can now go to bed earlier and not be woken by Neil stumbling around in the dark trying to sort out the dream feed. We can watch TV in bed of an evening without fear of disturbing him. I don’t need to worry about Neil getting woken up in the night by him. Chances are, my husband will sleep through any wake ups now. For this, I’m really glad as he works so hard each day.

It’s been an incredible journey and I’m sad it has come to an end. I have been in tears writing this as I have remembered all the good times. However, life goes on and the fact that I am currently watching him on the monitor pace up and down his cot, makes me realise we definitely made the right decision. 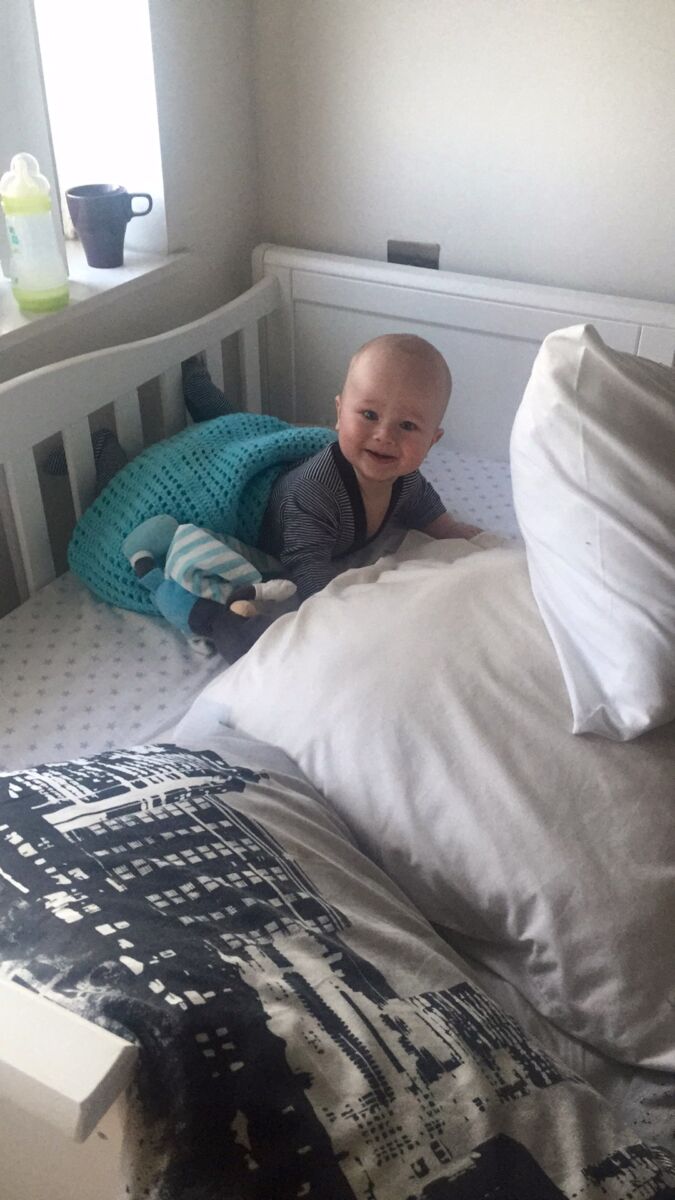 I want to do this with my LO who is already sleeping in his crib in a separate room. So yes, i'm going backwards but I have been co-sleeping with him in the mornings and I really enjoy it and it helps with my PPD. I am wondering though, how will naps work with the "sidecar crib" as he begins to crawl and stand up on things? He is 5 months and not even consistently rolling over. Would everything have to move to the floor?

I can't wait to put Imogen in her own room and see if she's happier with her own independence. We've had to co sleep the past couple of weeks and it's been a nightmare because I can't sleep if she's in our bed. I'm glad I'm not alone though so many people go mad at co sleeping.

Amelie was in our bed until 3 years old and Charlie only moved into his own room in the summer (2.5 yrs). We used to have the cotbed like yours with the side down attached to our bed with mountains of pillows, ha ha. I don't think any of us got a good night's sleep in the end and I was so fed up with laying on the edge of the bed in a light sleep as I was frightened I would lie on one of the children and suffocate them.

Dex looks super happy in his own bed though, such a smiley boy. xx

kai has been in his room since he was 12 weeks. when he was a newborn he used to sleep on my chest sometimes when i was laying in bed. its al about what works well for you and your family.