Blackpool is one of my favourite destinations in the North West when I’m looking for sun, sea, sand and fun filled family entertainment. We recently had a fantastic day out at Coral Island, and I’ve spoken previously about my love of Blackpool’s beach, its piers, the trams and the Pleasure Beach, so I was thrilled when we were invited to visit and review Madame Tussauds in Blackpool, a place I’d never even thought to visit before. Madam Tussauds is famous throughout the world and the attraction in Blackpool opened in 2011.

Madame Tussauds Blackpool is situated on the promenade, a couple of doors down from SEA LIFE Blackpool and a stone’s throw away from the famous Blackpool Tower (which incidentally is operated by the same owners, Merlin Entertainments). Getting to the attraction is simple, whether you’re driving or using public transport.

We parked at Central car park which is the easiest car park to access if you’re coming from the M55 and perfect for access to the main attractions on the sea front, including Madame Tussauds Blackpool. Parking costs £7.50 for the day and you can pay by either cash or card.

We arrived at Madame Tussauds Blackpool on one of the hottest days of the year and I was surprised to see that despite us arriving relatively early (it opens at 10am) the crowds were already building up outside and there was a queue to get in. We didn’t have to wait long though as there were two girls on the door who were directing people to the correct queue and getting everyone sorted, which put me at ease straight away.

Who can you see at Madame Tussauds Blackpool?

Madame Tussauds is obviously world famous for their wax figures of the rich and famous, so the first question on your lips I’m sure is, who can you see at Madame Tussauds Blackpool? The attraction is divided up into zones including, Strictly Come Dancing, Doctor Who, I’m A Celebrity…Get Me Out of Here, Music Stars, Sports Stars, Best of British, Coronation Street, Sporting Heroes Academy, MARVEL SUPER HEROES and Festival Fields. As soon as you enter the attraction, you are thrown straight into the brand-new Strictly Come Dancing area which is incredible. 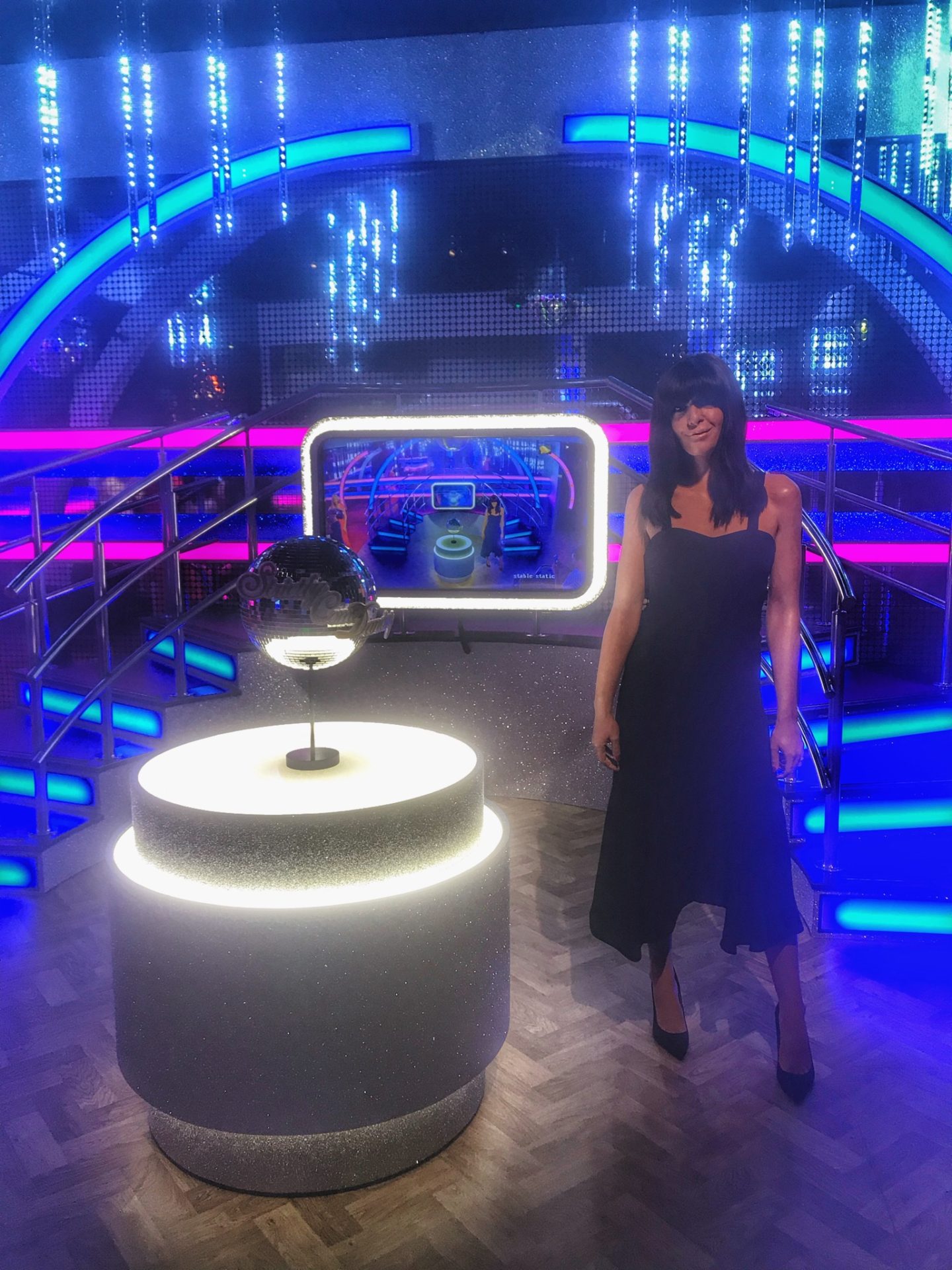 The whole area is set up like the Strictly Come Dancing studio and you can pretend to be a contestant or judge by holding up scores or waltzing your way down the famous Strictly set, with Claudia and Tess waiting for you on the dancefloor. Craig Revel Horwood is also there watching on.

The next area is Doctor Who, an atmospheric and dark zone with a wax figure of Jodie Whittaker placed outside the TARDIS from series 11, lots of Doctor Who outfits and plenty of photo opportunities! 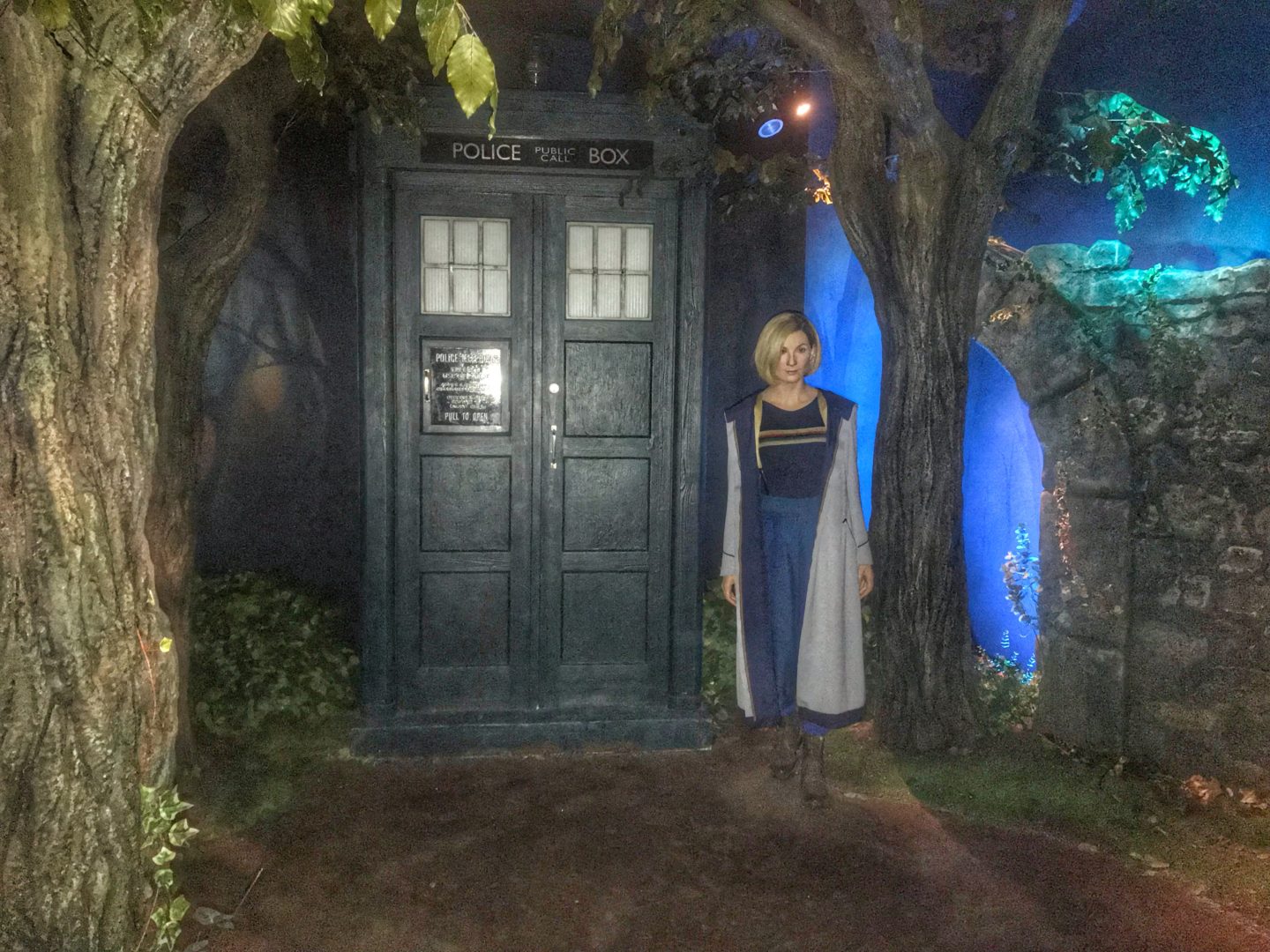 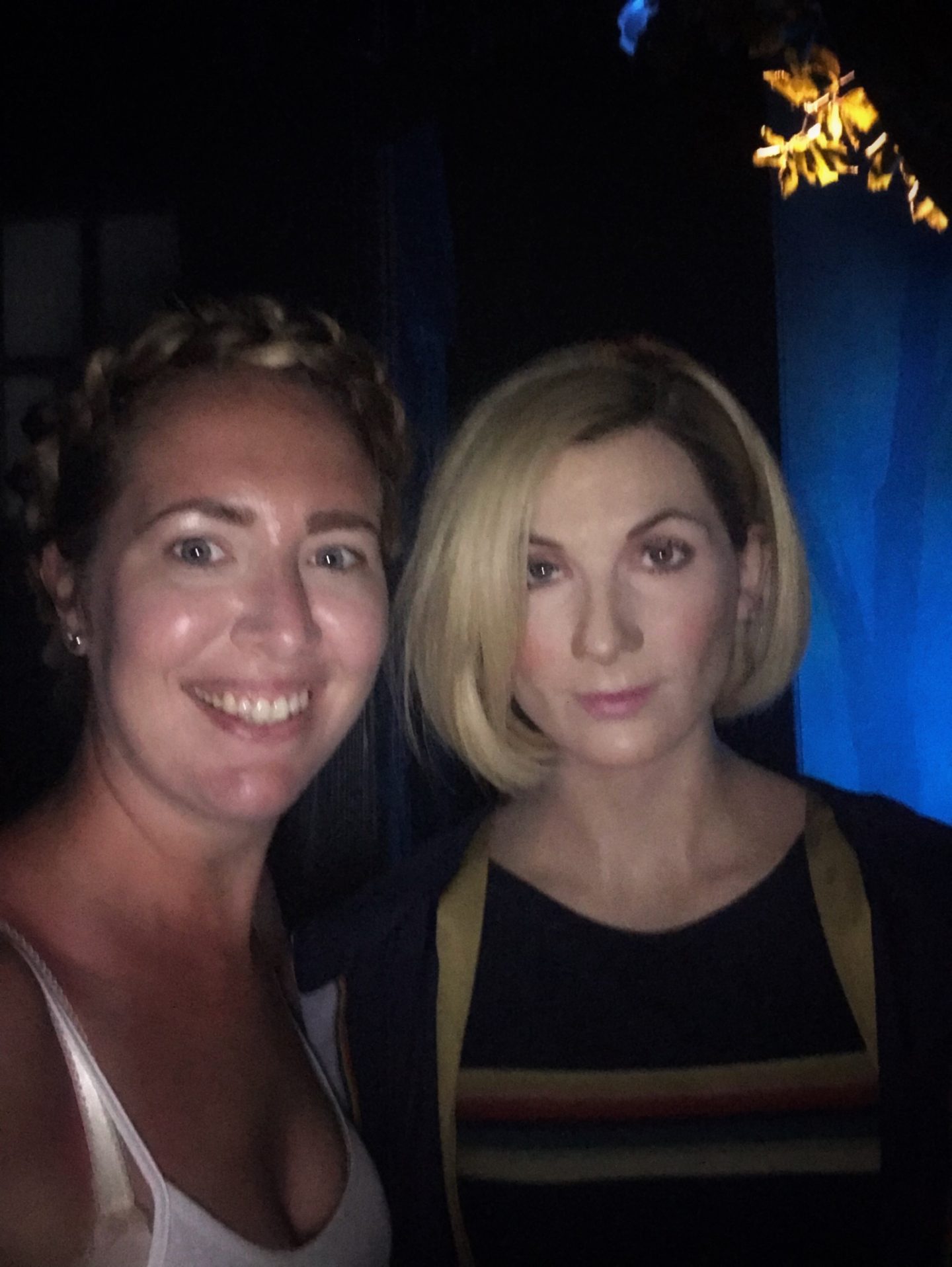 Next up was the I’m A Celebrity…Get Me Out of Here area, which was one of my favourites. Dexter and I sat with Ant and Dec in the replica studio, I had a go at a bush tucker trial and crossed a suspended rope bridge over 30ft in the air! We also bumped into ET while we were in this area and each of us got a photo on Elliot’s infamous bike, with ET in the front basket. 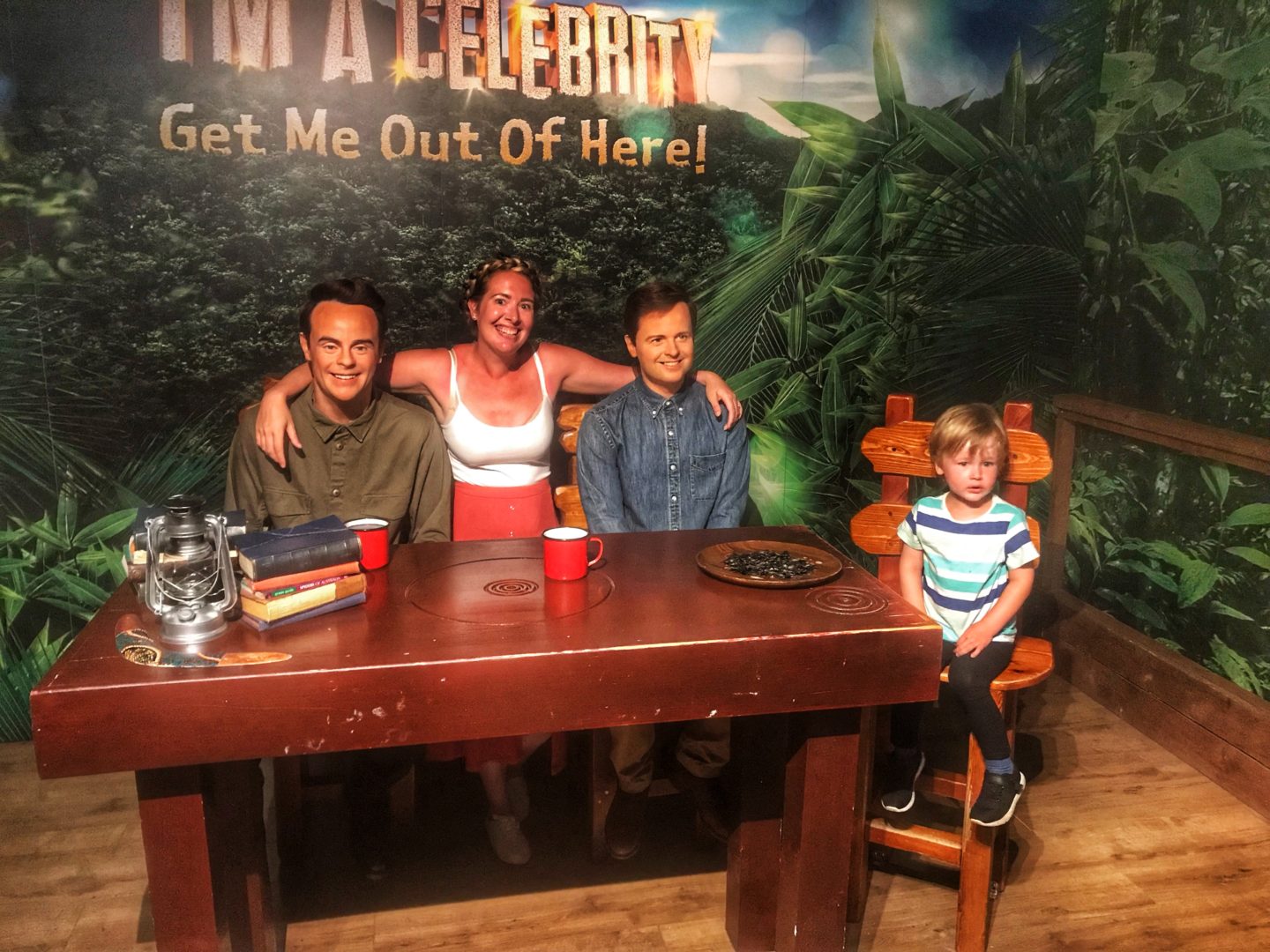 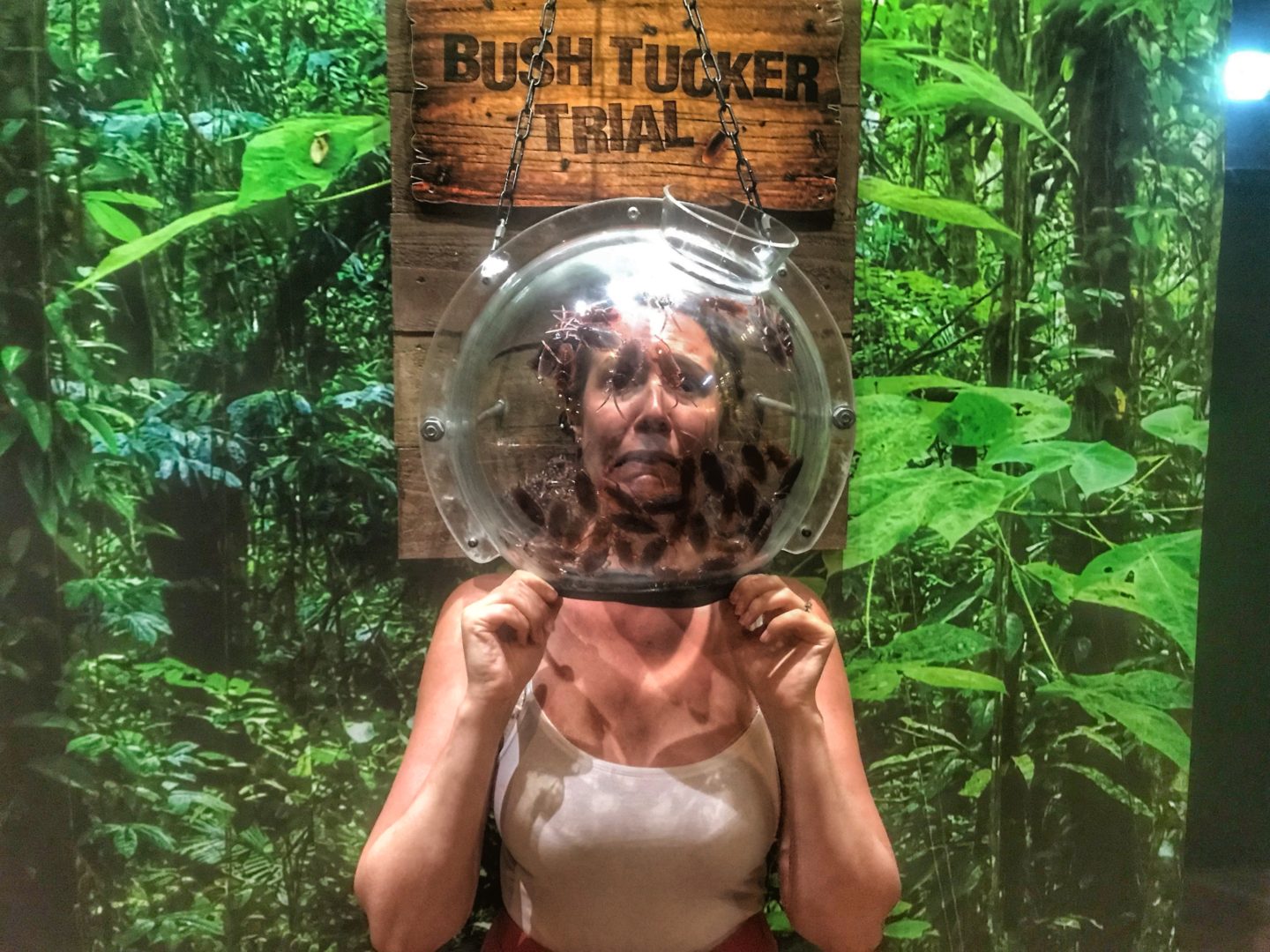 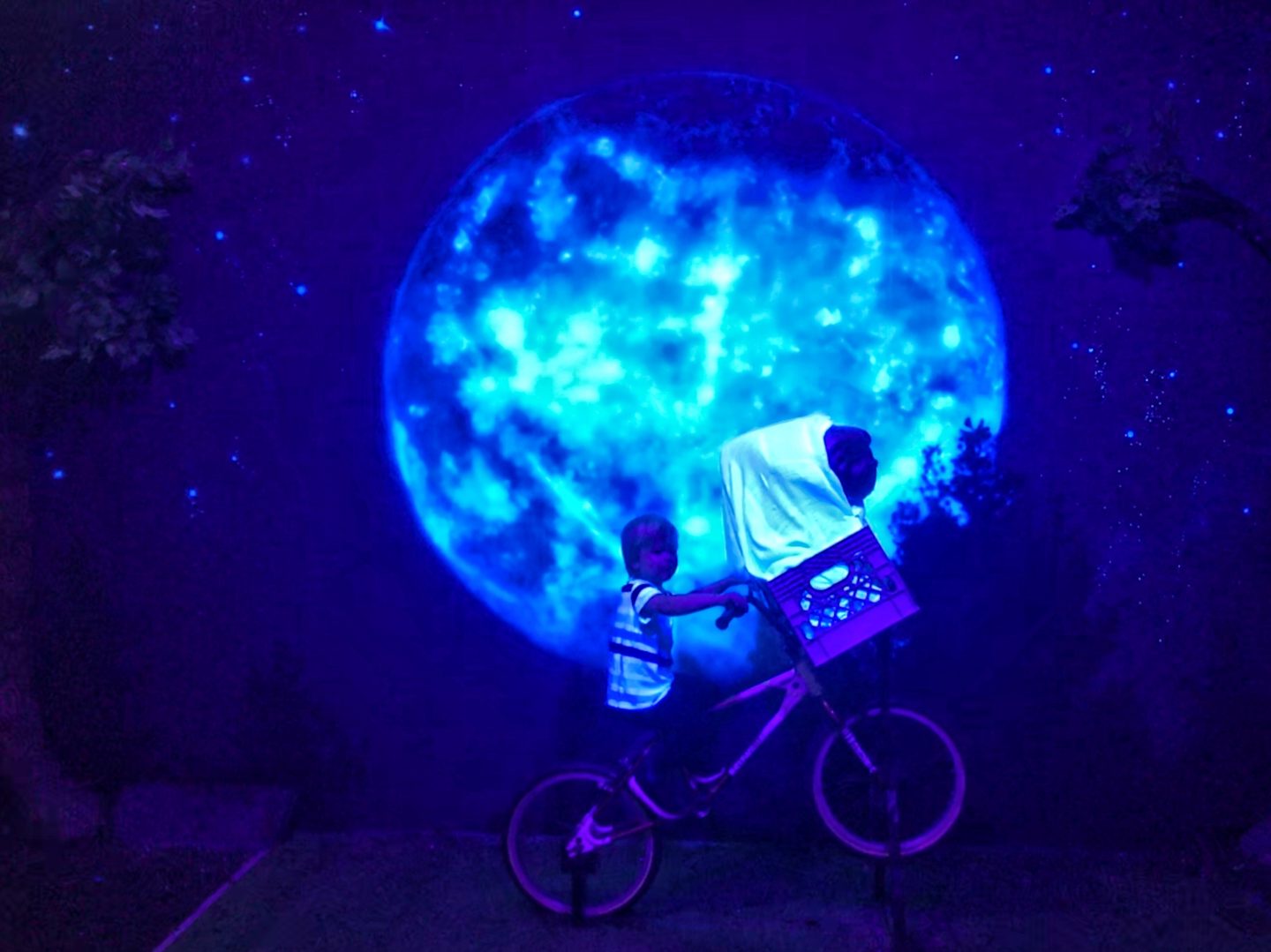 Next stop for us was Sporting Heroes Academy. We saw Wayne Rooney, Phil Taylor, Muhammad Ali, Lewis Hamilton, Mo Farah and Nicola Adams and enjoyed posing with the wax figures and having a bit of a laugh with different shots! 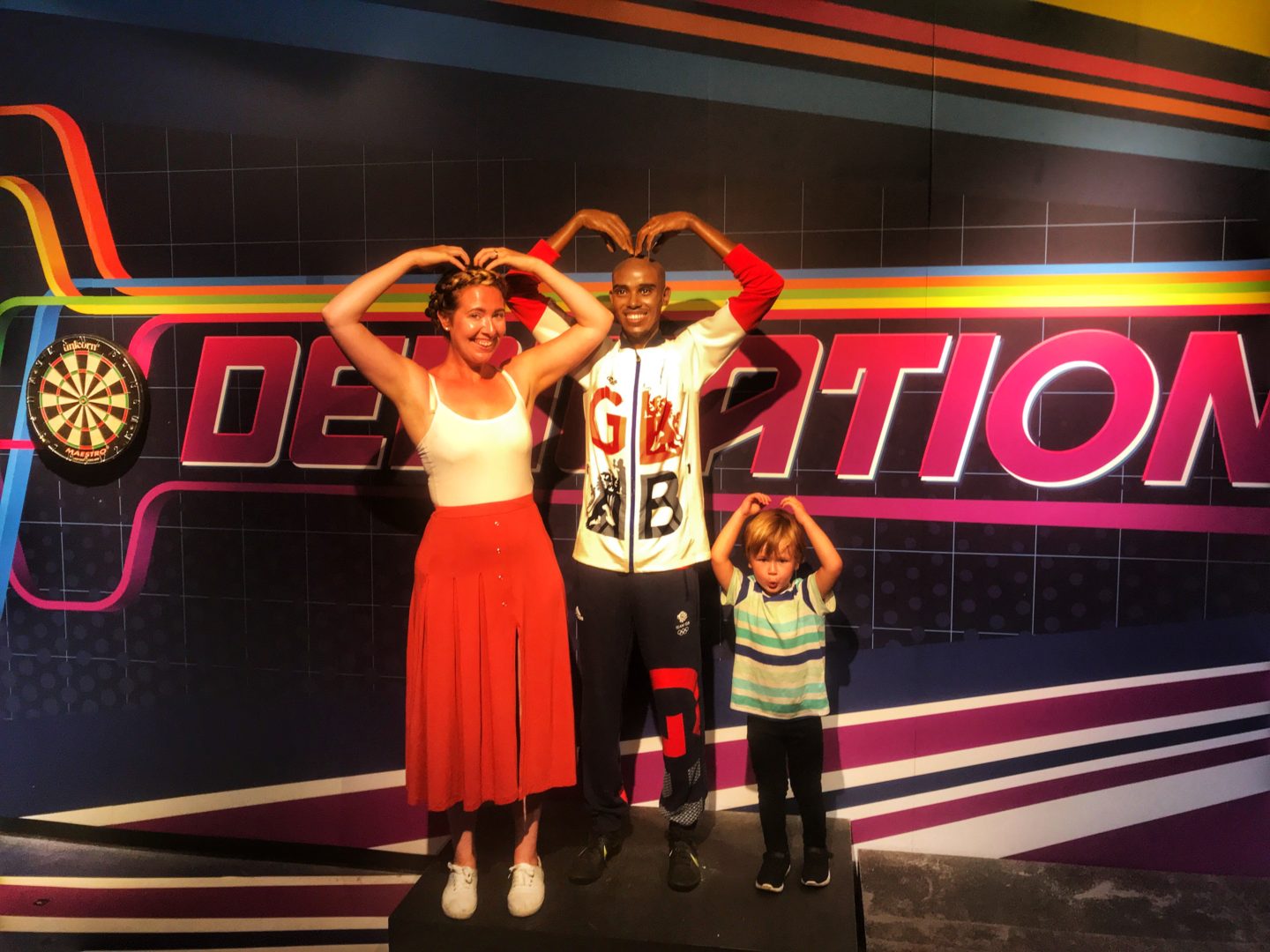 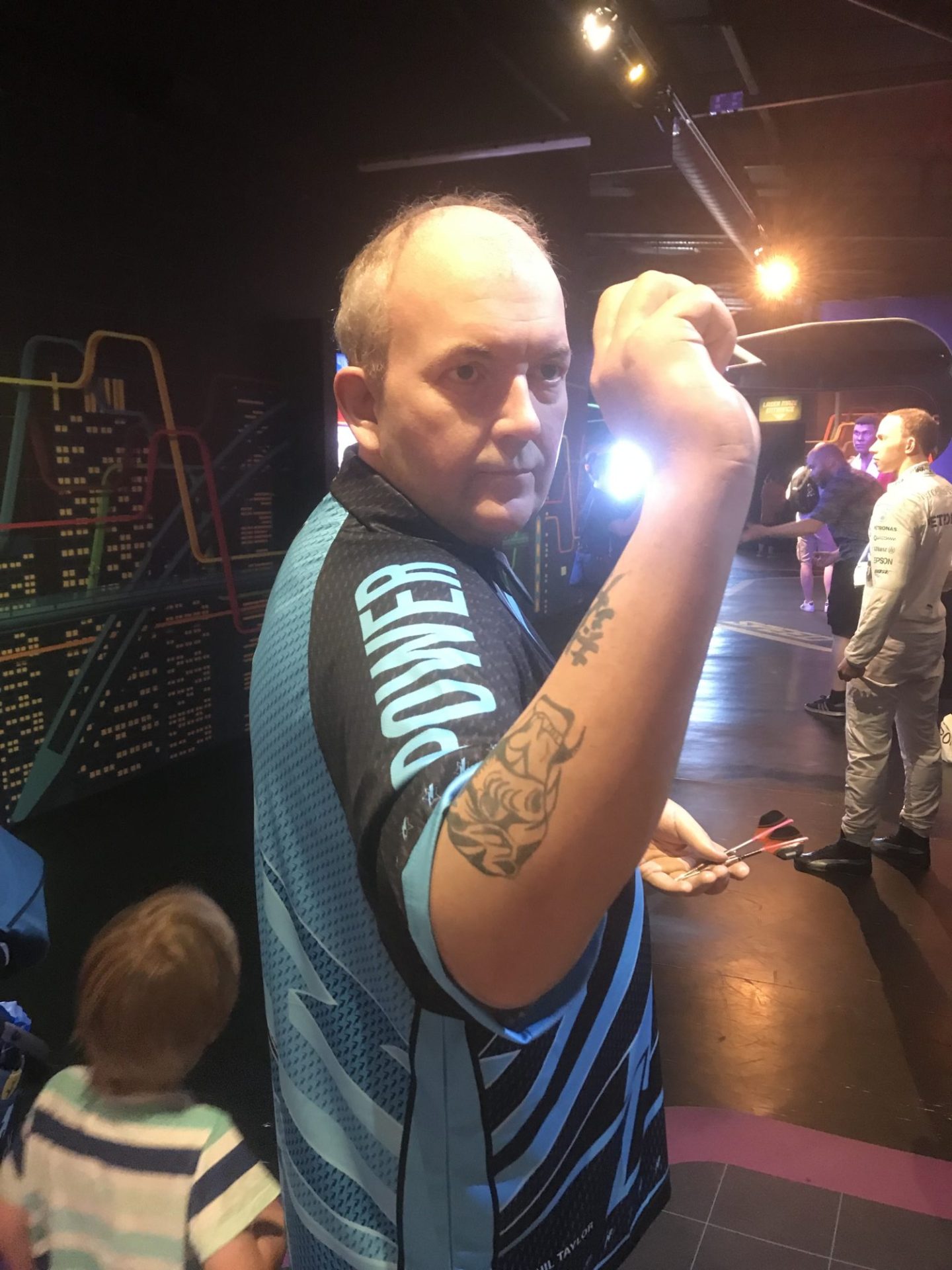 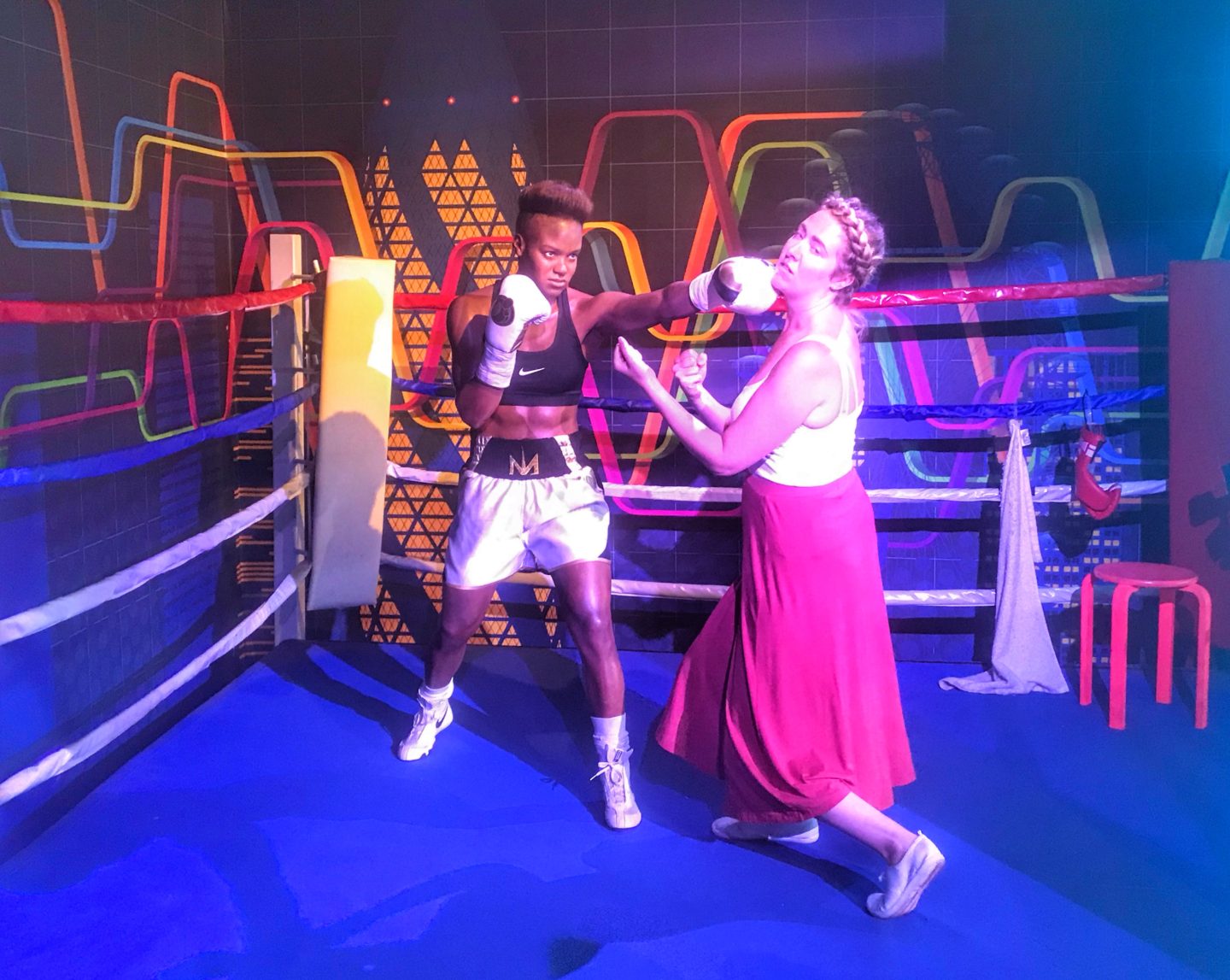 Next up was the MARVEL SUPER HEROES area which includes Iron Man, Captain Marvel, Thor, Hulk, Spiderman and Groot. Dexter at the grand old age of three years old was a little apprehensive of this area, and had been since he saw ‘the green man’ on a billboard in the car park. However, he loved having an interactive photo taken with Spiderman and adored watching his Mummy try her hardest to impersonate the Hulk by lifting up a yellow New York taxi. 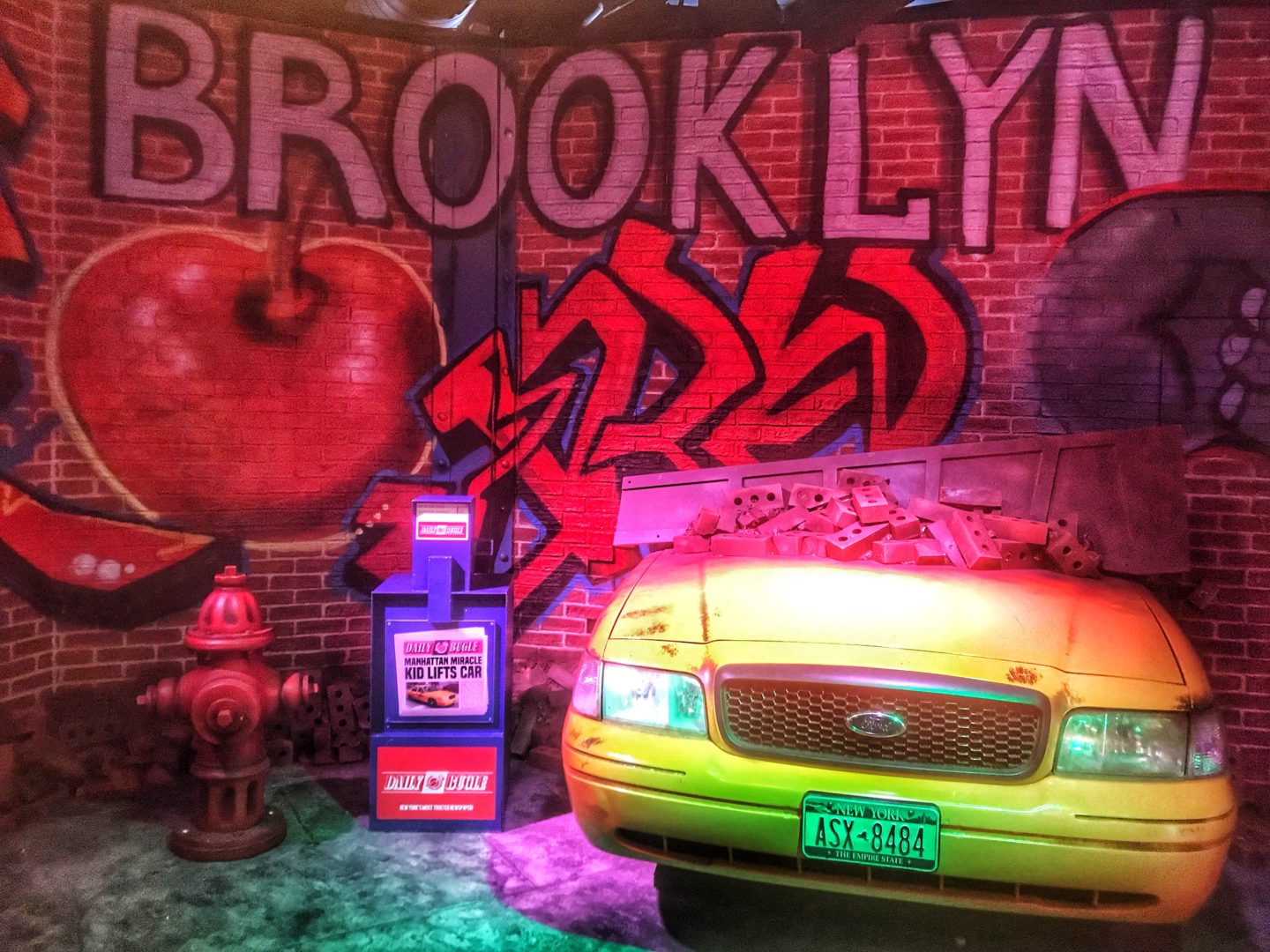 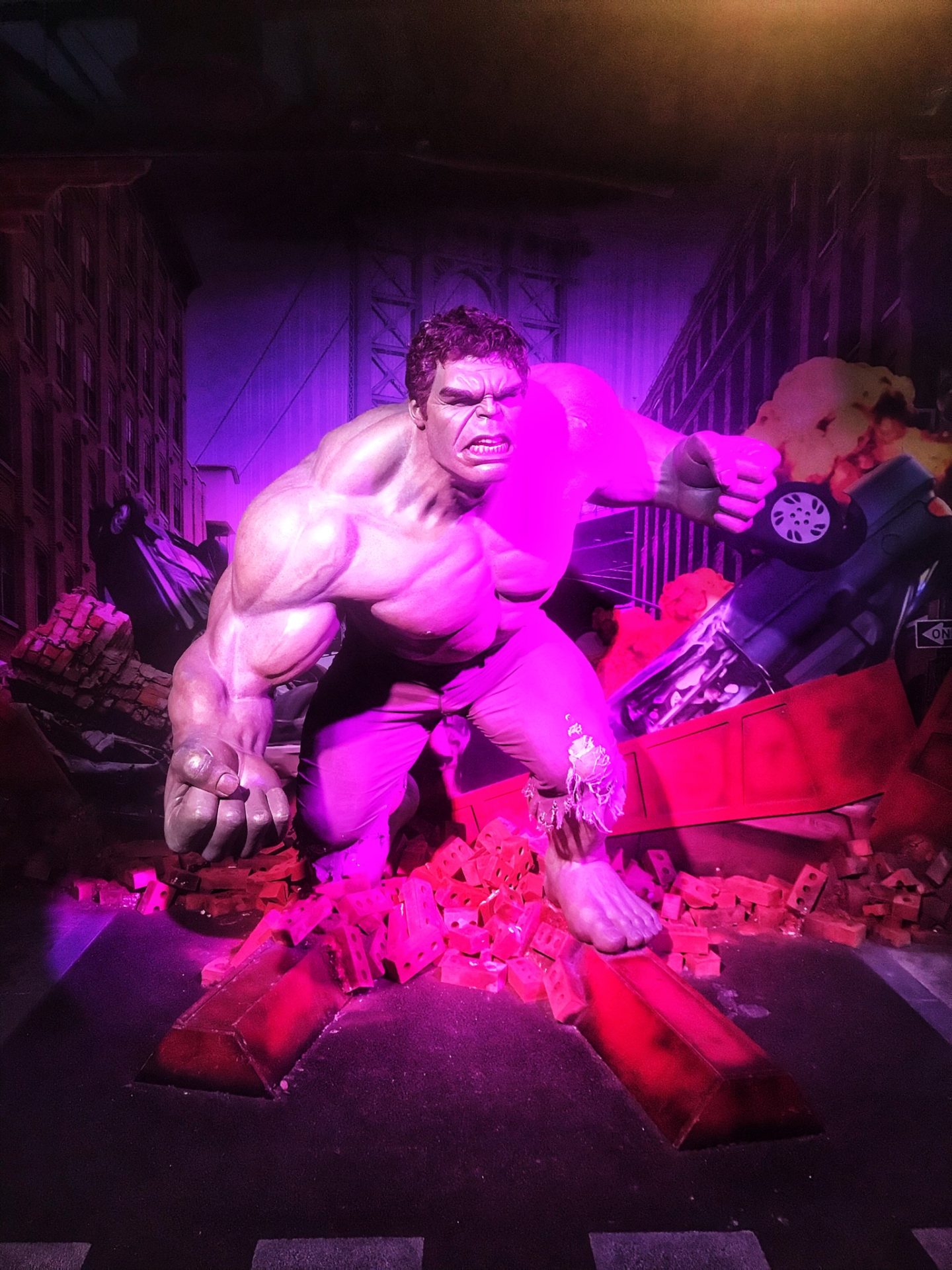 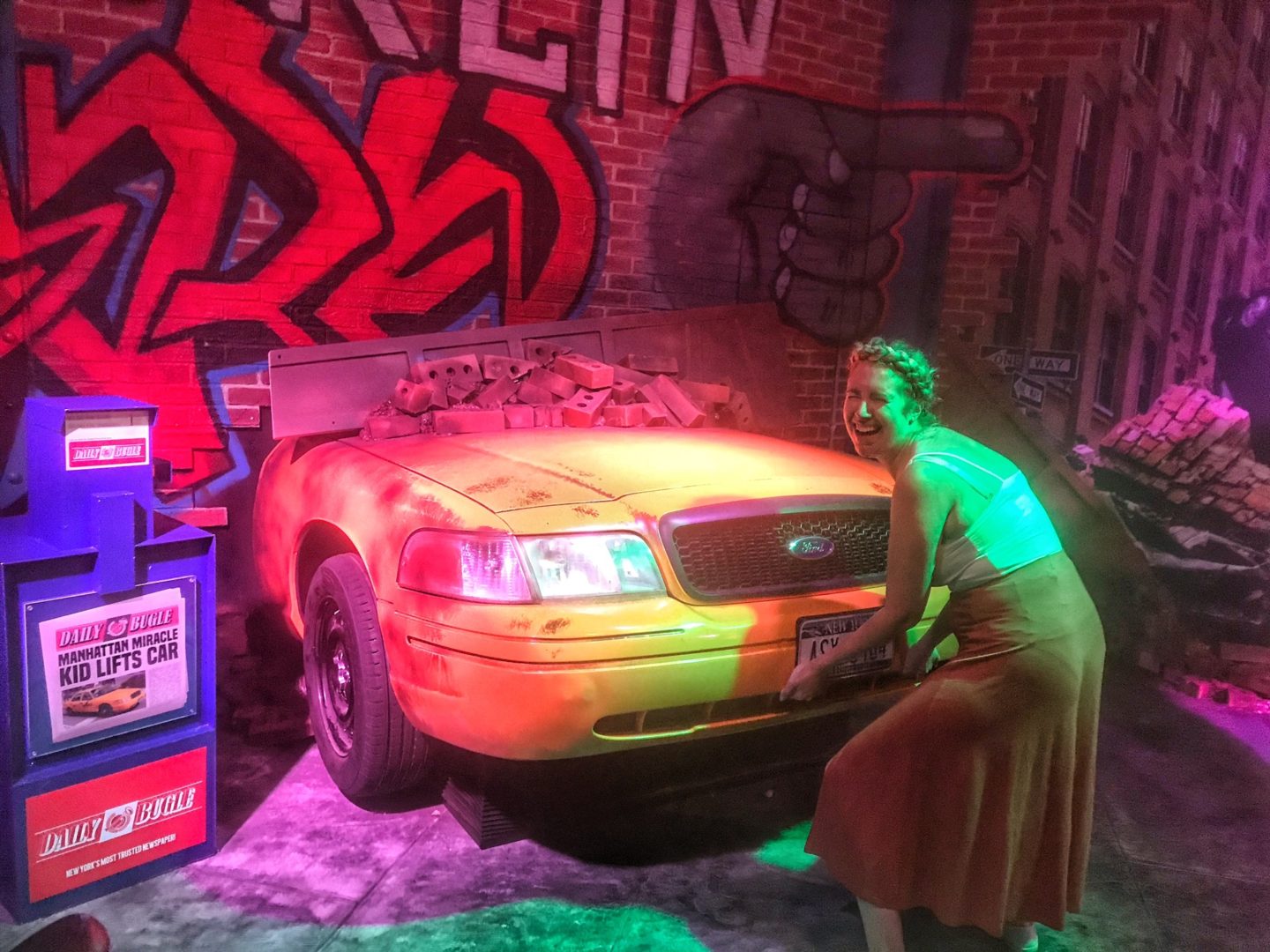 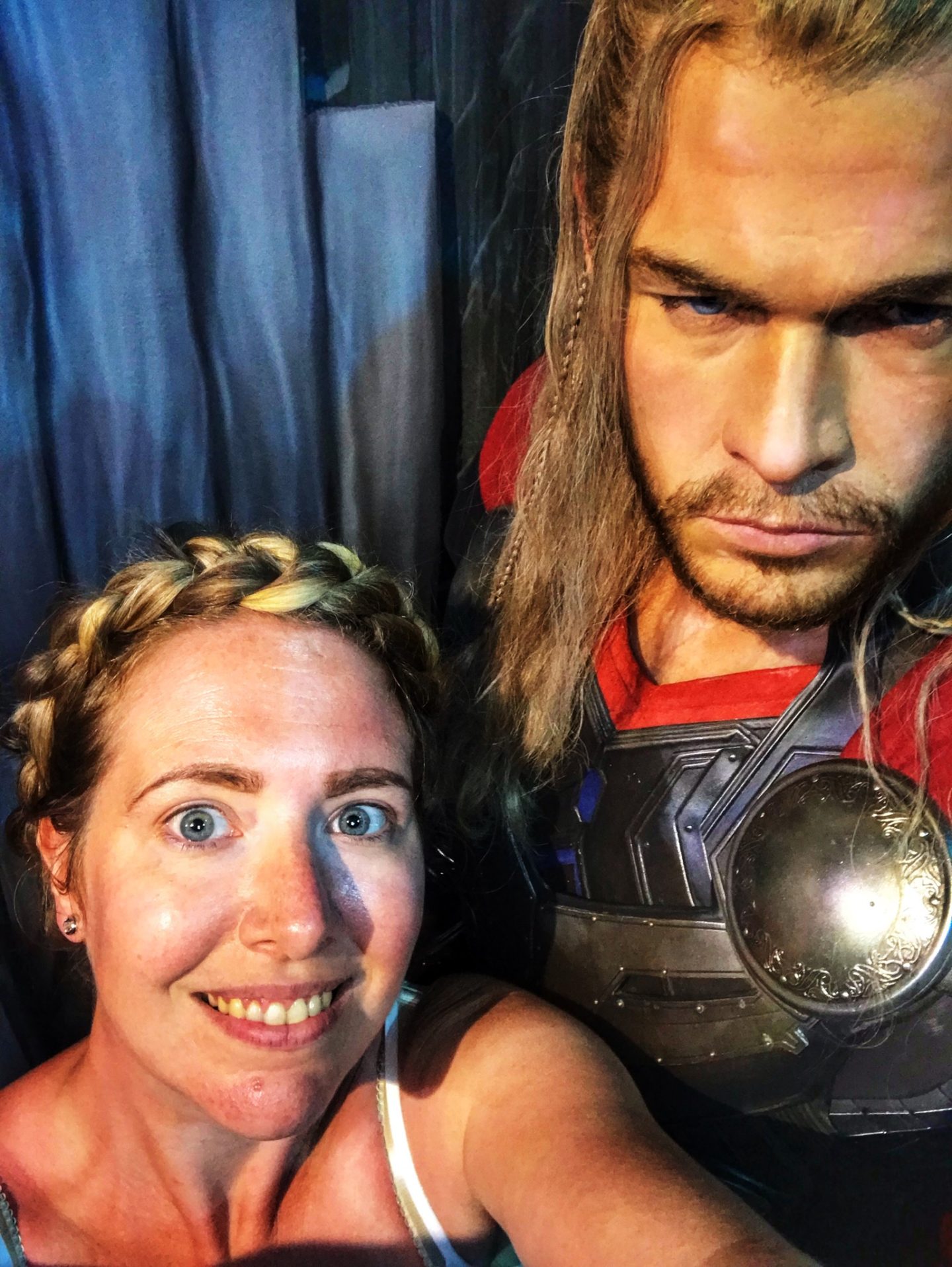 Coronation Street came next, and this was the section I was most looking forward to seeing. I must admit, I no longer watch Corrie, but have found memories of watching it as a child in the 90s and enjoy watching the odd classic episode on Drama. We loved the replica Rovers Return and were surprised to find out it was a fully licensed working pub! Is there anything cooler than propping up the bar alongside Bet Lynch with an actual pint in your hand? Just outside the Rovers we saw Jack and Vera Duckworth and Hilda Ogden and inside we saw Ken Barlow, Bet Lynch, Michelle Connor and Deirdre Barlow. I must say the wax figure of Jack (aka Bill Tarmey) is incredibly life like and I love the photos we took of Dexter and I alongside him! 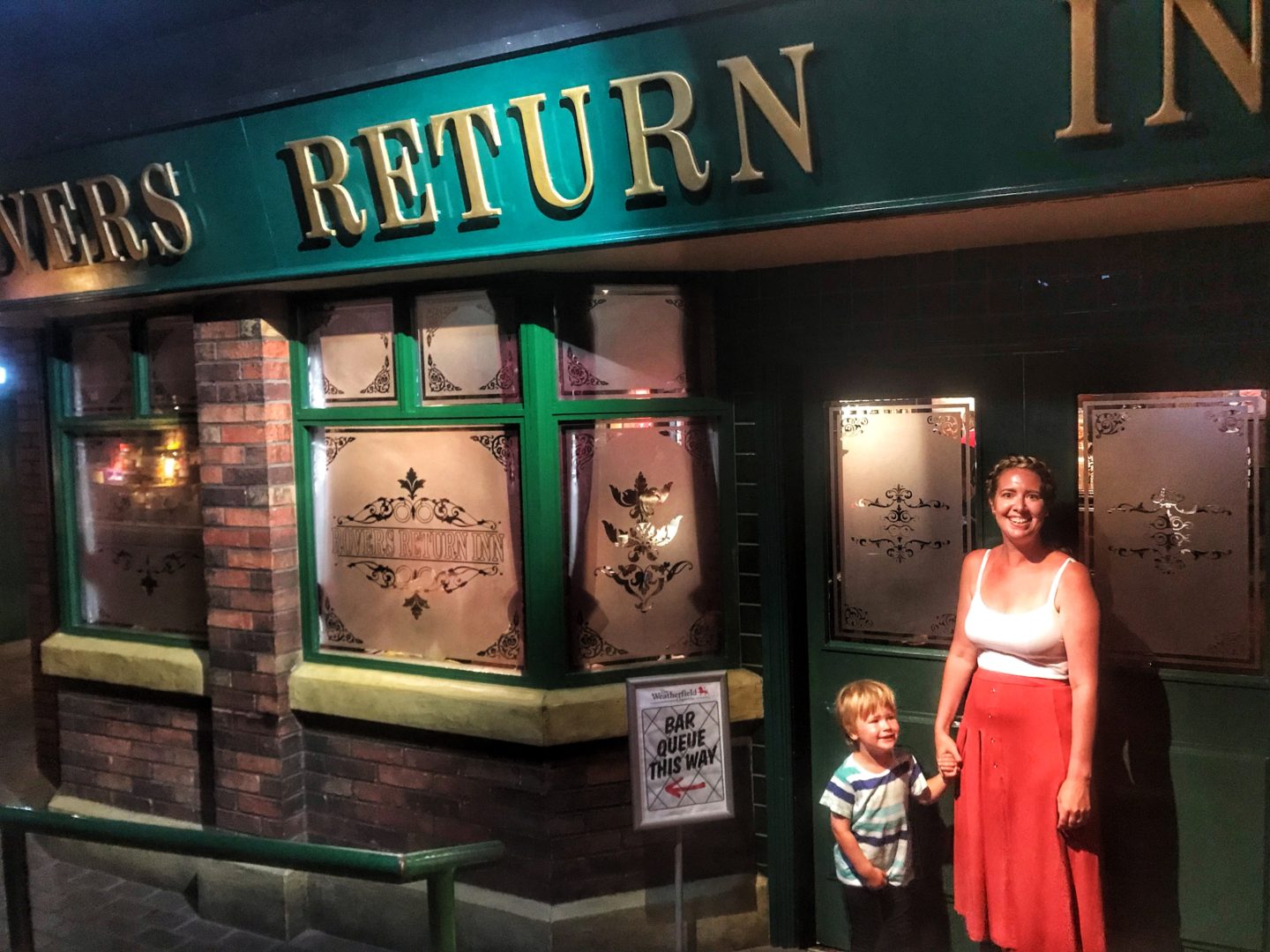 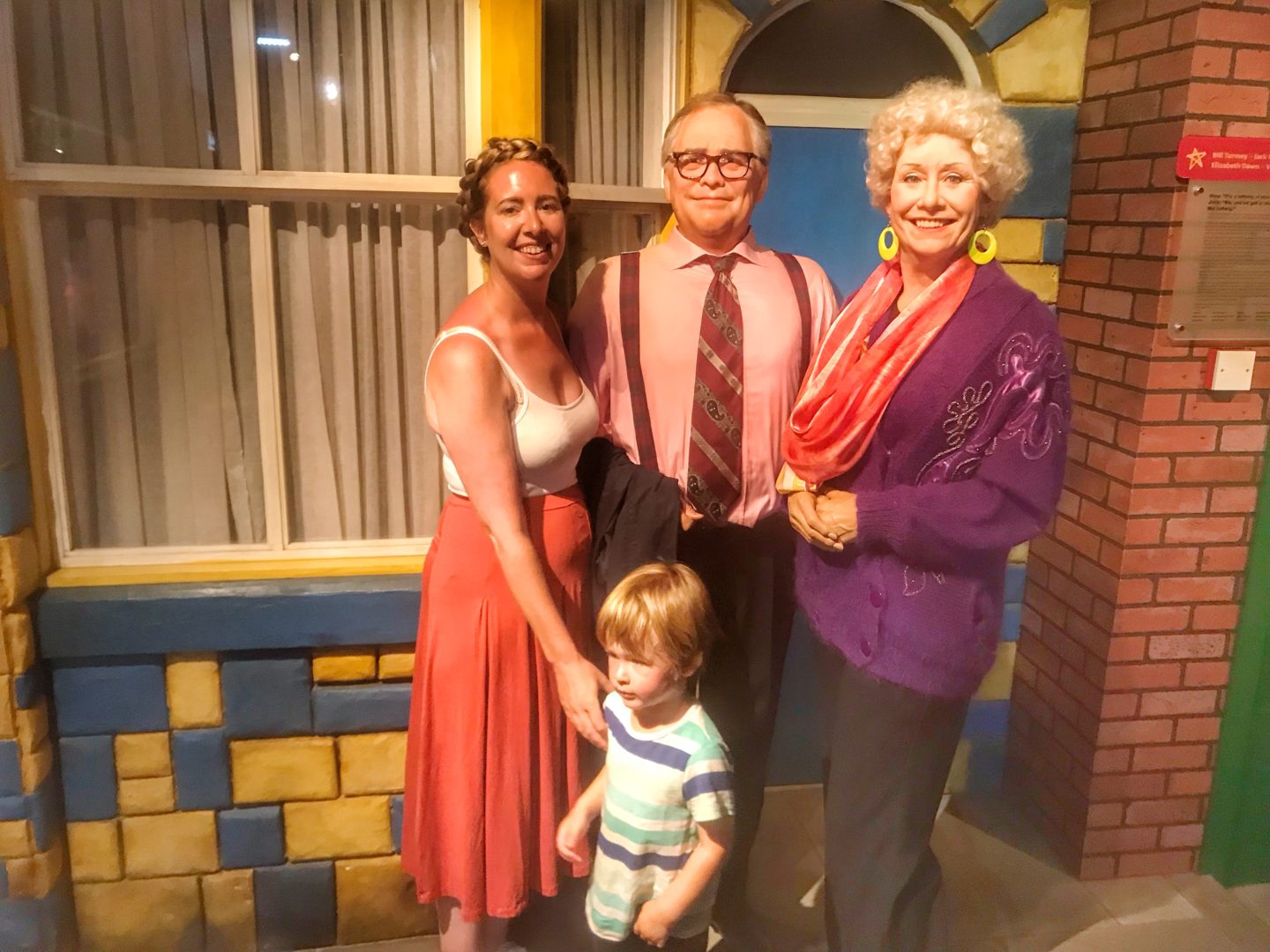 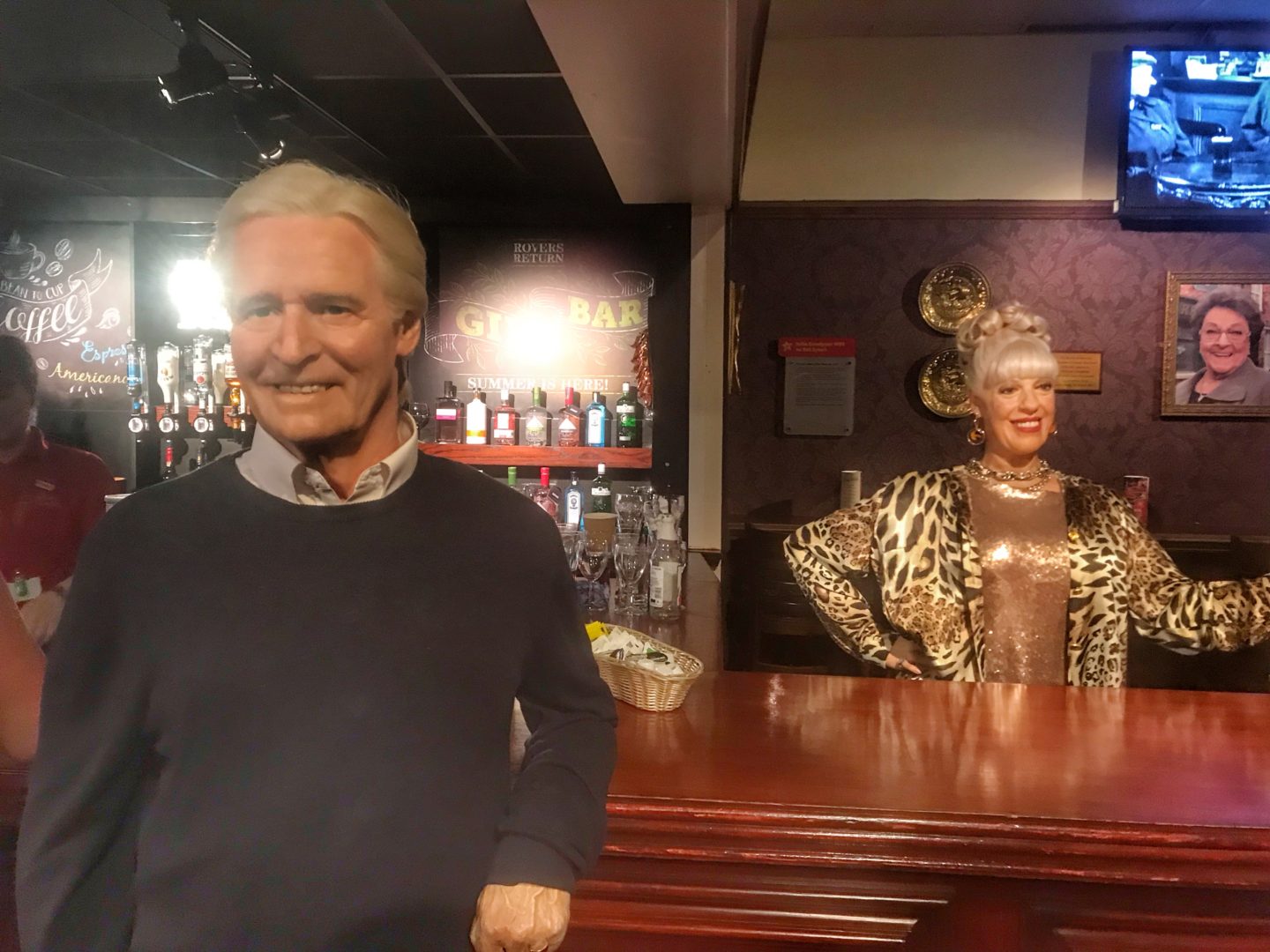 Next up was the Music Stars area which featured Michael Jackson, Freddie Mercury, Shirley Bassey, Johnny Rotten, Lady Gaga and The Beatles. I think there’s usually a few more, however there is currently a Festival Fields area where many of the wax figures have been moved to. Dex enjoyed playing the drums and I loved pretending I was walking across the zebra crossing on Abbey Road with John, Paul, George and Ringo! 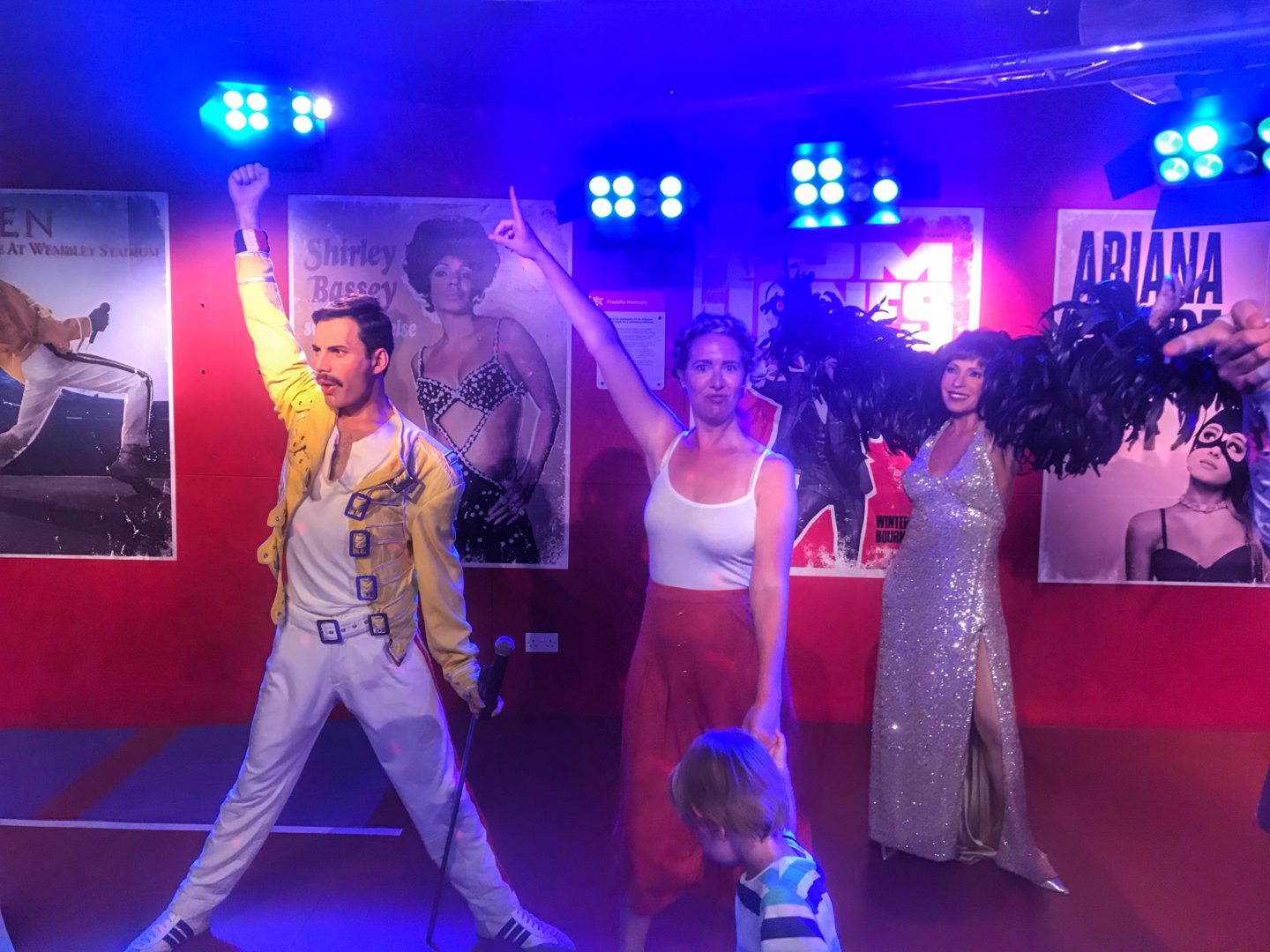 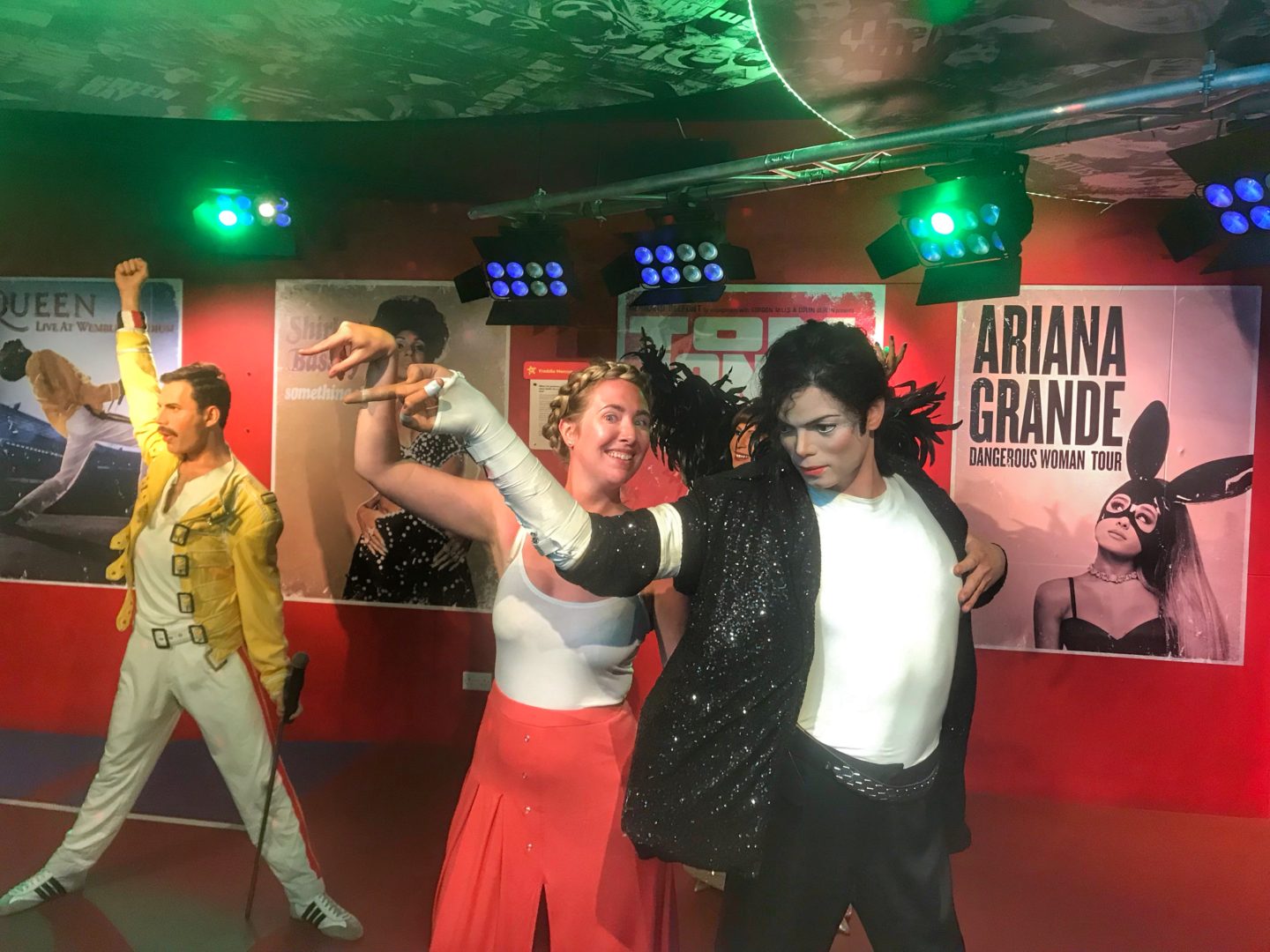 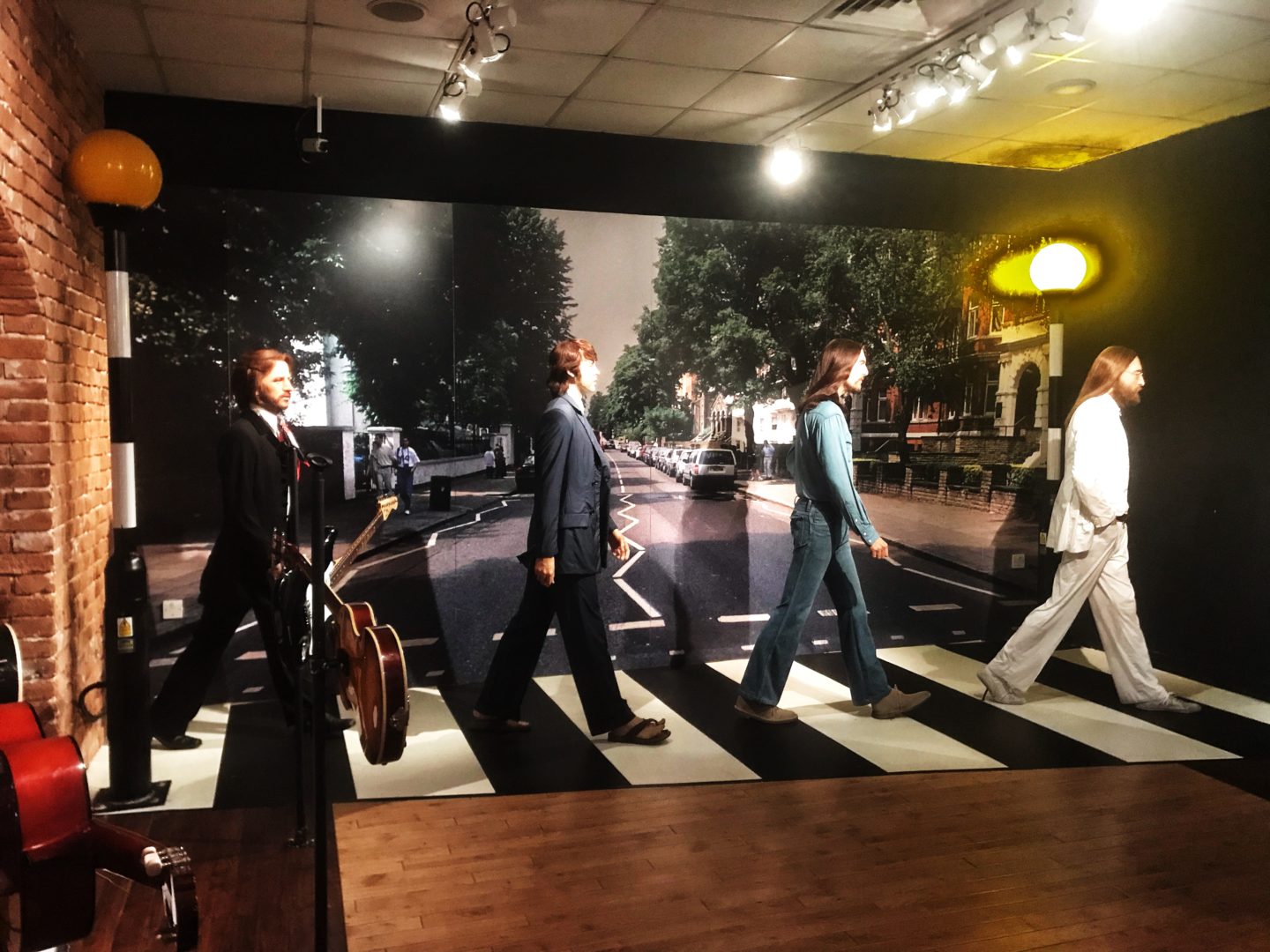 Finally, we came to Best of British and the Festival Fields are where we saw the Queen, Princess Kate and Prince William, a huge range of James Bonds including Daniel Craig, Sean Connery, Roger Moore and Pierce Brosnan; Susan Boyle and Joanna Lumley. Over at Festival Fields we saw Ed Sheeren, Olly Murs, Arianna Grande and Justin Timberlake. 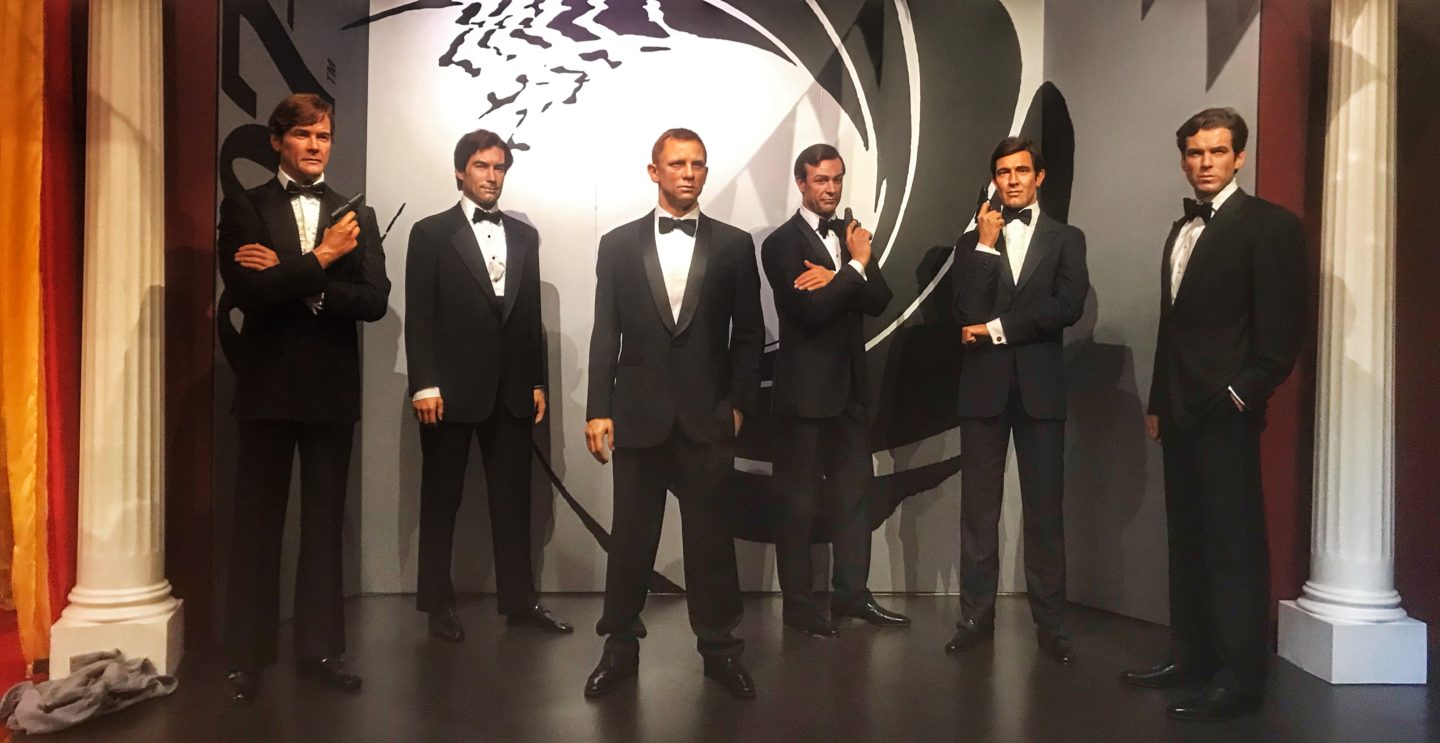 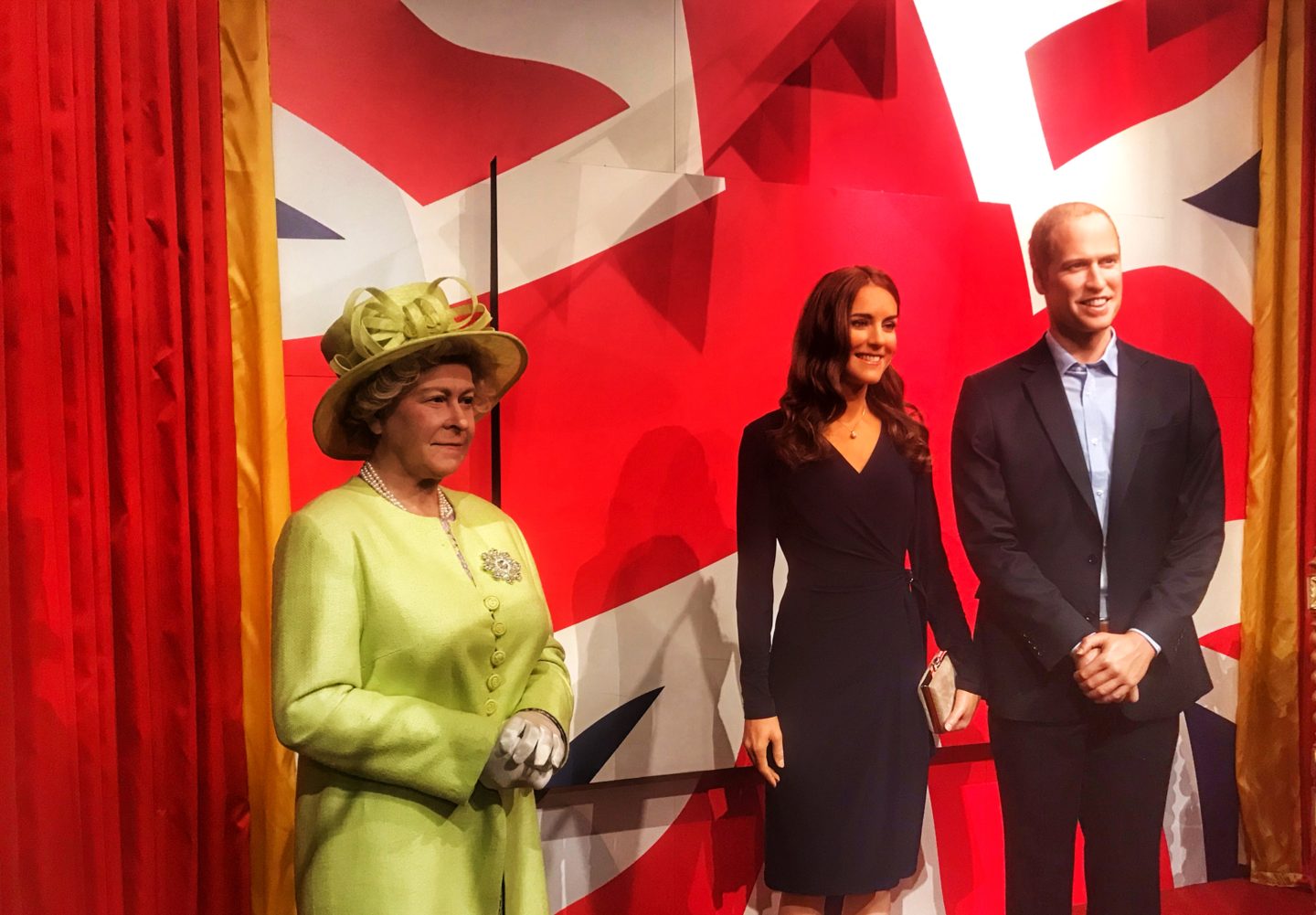 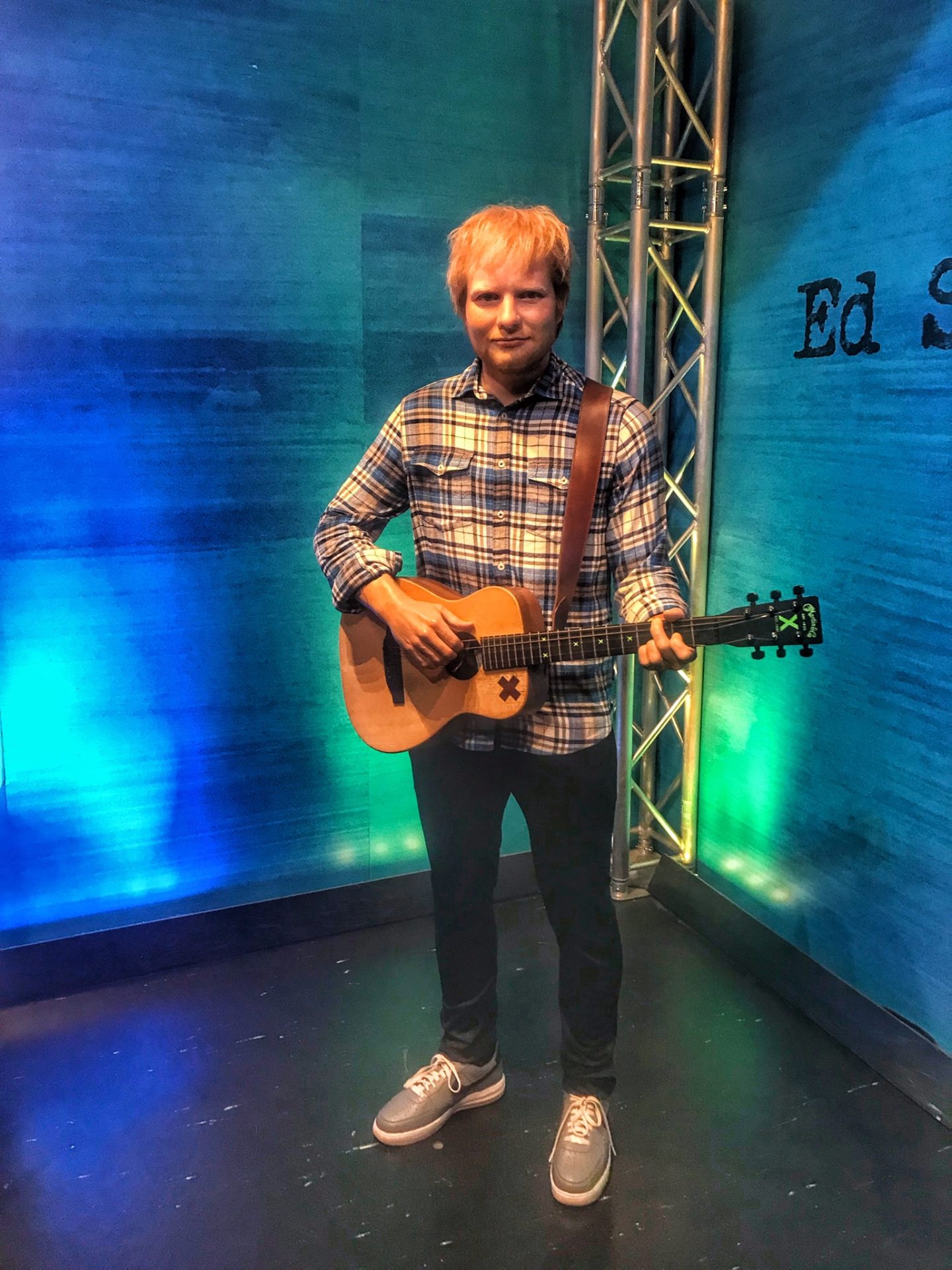 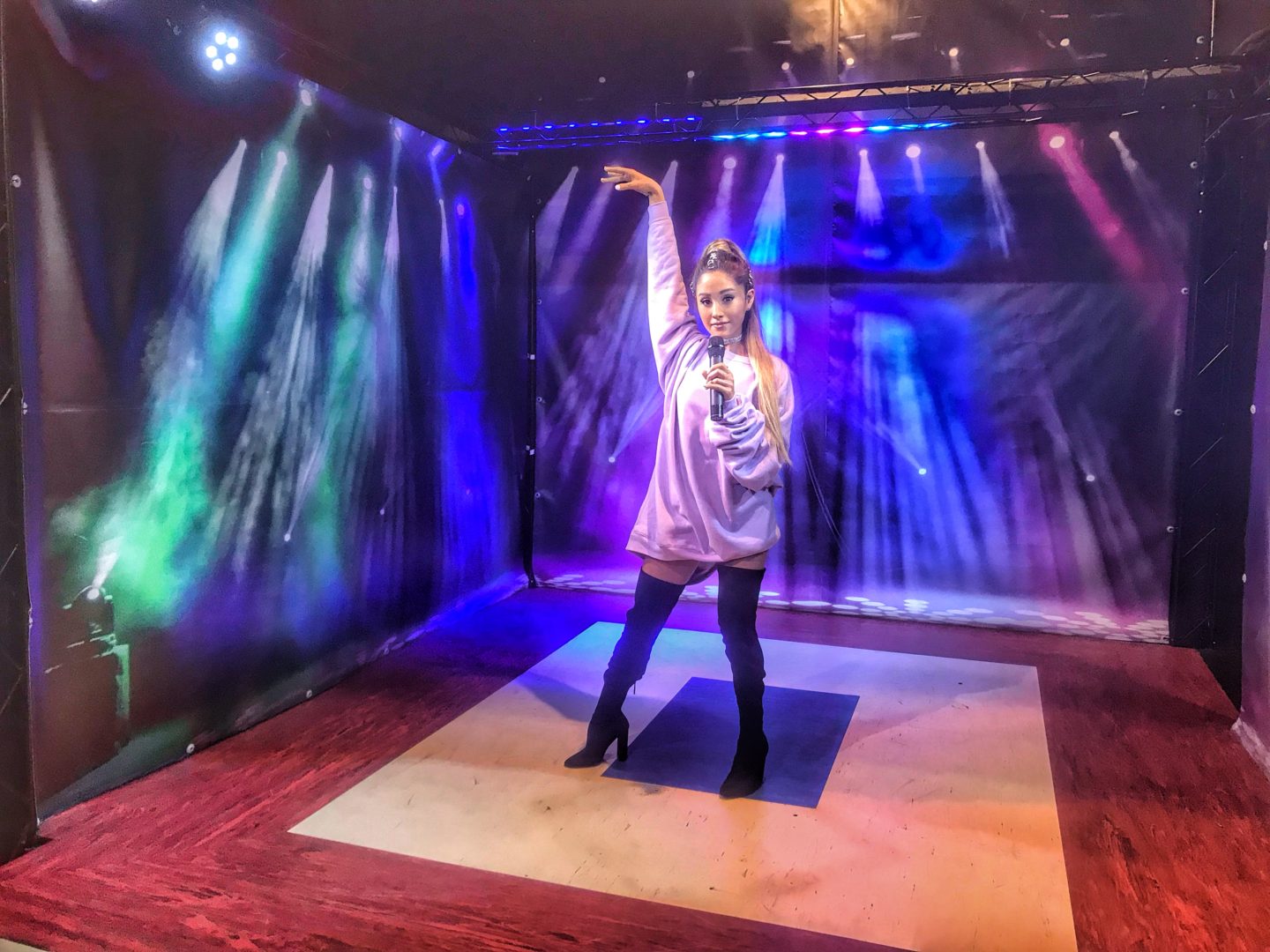 But that wasn’t the end of the wax figures. We also bumped into Paddy McGuiness on the set of Take Me Out, John Bishop, Tommy Cooper, Ken Dodd, Morecambe and Wise and Barbara Windsor as we made our way to the gift shop and exit. And of course, who better to see you out at the door, but Bruce Forsyth, apt thanks to his catchphrase “Nice to See You, to See You….Nice!” 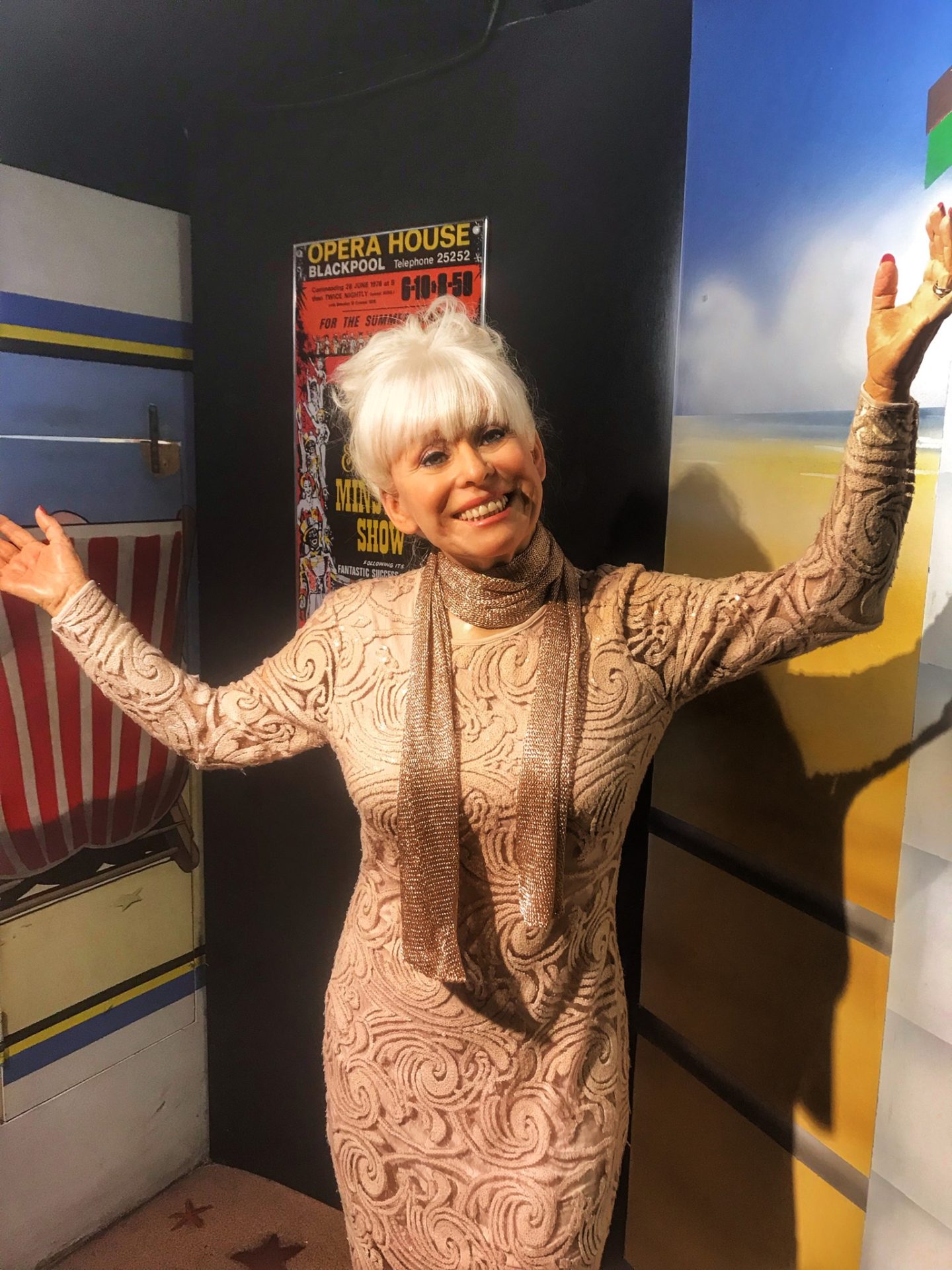 What else is going on at Madame Tussauds Blackpool?

When I found out we were going to Madame Tussauds Blackpool, I wondered how Dexter would cope with having to be dragged around an attraction full of wax figures, however there were plenty of engaging and fun things for him to take part in, so he really enjoyed himself! Posing with wax figures isn’t quite his thing yet, but he loved the sports area where he could practise shooting penalties; the music area where he could sit and play the drums and the very many interactive TVs and buttons throughout the attraction. He also loved the mirror maze which is situated towards the end of the attraction and takes you back to the Victorian days of Blackpool’s seaside.

You could easily spend three or four hours inside Madame Tussauds Blackpool, taking part in all the interactive elements of the attraction, as well as posing for selfies with your favourite wax figures.

Anything else you need to know?

There are toilets located frequently throughout the attraction which is really handy if you have little ones who are constantly desperate for a wee.

The attraction is split over three floors, but there is a lift available if you want to use a pram. However, it could be a slow process (Dexter and I would wander to the next bit while we waited for Neil and Felix to take the lift) so next time we will definitely babywear so we don’t have to wait around for lifts. We saw a few older people struggling with the stairs so make sure you speak to staff if you need to use the lift as they will be happy to help.

The staff are super attentive and very pleasant, as they always are at Merlin attractions. When we first arrived and Dexter was a bit overwhelmed with the noise and darkness, a member of staff approached us and asked if we’d like to swap our tickets for another Merlin attraction, which I thought was fantastic and very thoughtful. I was really, really impressed.

It is worth bearing in mind that Dex was very overwhelmed at first with it being quite dark and rather loud at the entrance (the voiceover guy from X-Factor is booming out across the promenade) so if you have little ones with sensory issues or sensitive toddlers, make sure they’re fully prepared. He was also a little young to know who anybody was apart from Spider-Man and the wax figures were a bit beyond him, but he fully enjoyed all the other interactive elements.

As an attraction I had never thought to visit, I was pleasantly surprised at what a great time we had as a family here. I loved the nostalgia of visiting the Rovers Return and seeing the old characters of Corrie that I remember from my youth. I loved the interactive aspect of the MARVEL SUPER HEROES area and I was really impressed with a lot of the wax figures who seemed so life like. Quite often I’d have to do a double take when I was wondering at on Earth some guy next to me was smiling so wildly, before realising it was a wax figure! I was particularly impressed with Jack Duckworth, Alan Carr, Jodie Whittaker, Claudia Winkelmann and Ed Sheeren.

You can purchase tickets here.

What a thorough and informative post. We visited Blackpool a few months back - it's a great place for the kiddos. I'll definitely be adding Madame Tussauds to the list - being on 'set' of I'm a Celeb looks awesome!

We used to go to the London one as kids and loved it - it's not somewhere I'd really considered whilst the kids are little but your photos have made me so nostalgic, I want to go now! Would love to visit Blackpool at some point and this is definitely going on the list! ps. the photo of you boxing is my absolute favourite!!

We think it's great too! Especially the Marvel exhibit!