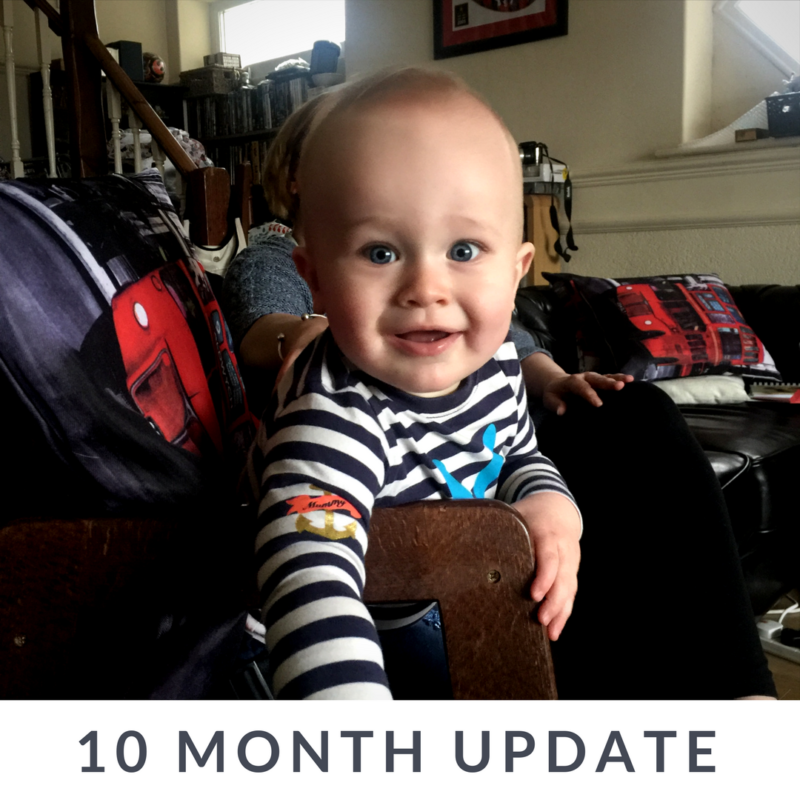 I’m not even exaggerating when I tell you that it does not feel like a month since I wrote the last update. Time really does fly when you are having fun. We are now at 10 months old. What has changed in the past month?

Dexter doesn’t have any more teeth. In fact, the whole teething thing has calmed down considerably. He is still drooling like mad, but I can’t remember the last time I had to administer Calpol or teething powder.

Baby led weaning has gone so well that I don’t even feel like we are weaning him anymore. His bottles have dropped off considerably and he is now having four a day: morning, late afternoon, bedtime and a dream feed. I don’t know why this dream feed had to come back, but if we don’t do it, he is up anywhere between midnight and 4am, screaming the house down. He drinks around 3-5oz in the morning, 5oz in the afternoon, 7oz before bed and another 7oz at midnight. The dream feed is tough when we feel so tired ourselves. In fact, some nights we fall asleep which makes everything worse because we are so rudely awaken.

Dex will tackle everything when it comes to food. He usually has a crumpet and a banana for breakfast, an omelette for lunch with a yoghurt for pud, an afternoon snack of a cookie/puffs and some berries and then whatever we are having for tea. This month saw the first time he ever told us he was full. It was hard to understand what was going on at first because this has literally never happened! Firstly, we thought he was choking because he was going red and growling. Then, I thought he was constipated, but when he started banging the highchair, I quickly took the food away and he perked up considerably. Lesson learnt! He also makes a really cute noise when he wants more food. I’ve been offering him grapes, quartered, as an afternoon snack and will slice them one at a time. Once he’s finished one, he yelps and gestures towards the packet on the table. He is getting very clever.

He is really enjoying being on his feet and will pull himself to standing at any given opportunity. He is able to walk by holding onto furniture and cruising along, however if I try to hold his hands above him head to allow him to walk, he collapses in a heap. He is the same with the walker; he can pull himself to standing with it, but if I try to move it, to get him to walk, he falls down. I’m not going to push the matter and just let him continue to pull himself up to strengthen his legs.

His favourite things this month have been standing on our bed and looking out of the window; watching Little Baby Bum in the mornings on TV and watching the washing machine spin around. He has finally gained a interest in watching TV which has been amazing for me. He will sit in bed with me while I have a cup of tea and read my phone, glued to the nursery rhymes.

He is becoming more and more switched on everyday. The biggest indicator of this, is how he reacts with my Mum’s dog. I noticed the first few times we went there this year, he wasn’t really paying that much attention to the dog. Then a few weeks ago, he would touch the dog if she came near. However, the most recent time we visited my Mum and the dog, he was obsessed with her, following her around the room with his gaze and getting excited when she came near. It was lovely to watch.

Sleep wise we are back on two naps a day, everyday. He sleeps in the morning from around 9.15 to 11.30-12 and then has an afternoon nap from 2.30pm to around 4pm. His bedtime is at 7pm and apart from waking for a feed at midnight, he sleeps through until 6 or 7am the next morning. Lucky Mummy!

We have started collecting bits for his 12-18 month wardrobe, but for now, he is predominately in 9-12 month stuff with a few 6-9 month bits still hanging around (mainly t-shirts and jumpers).

That’s about it for this month. To read about previous months click here.