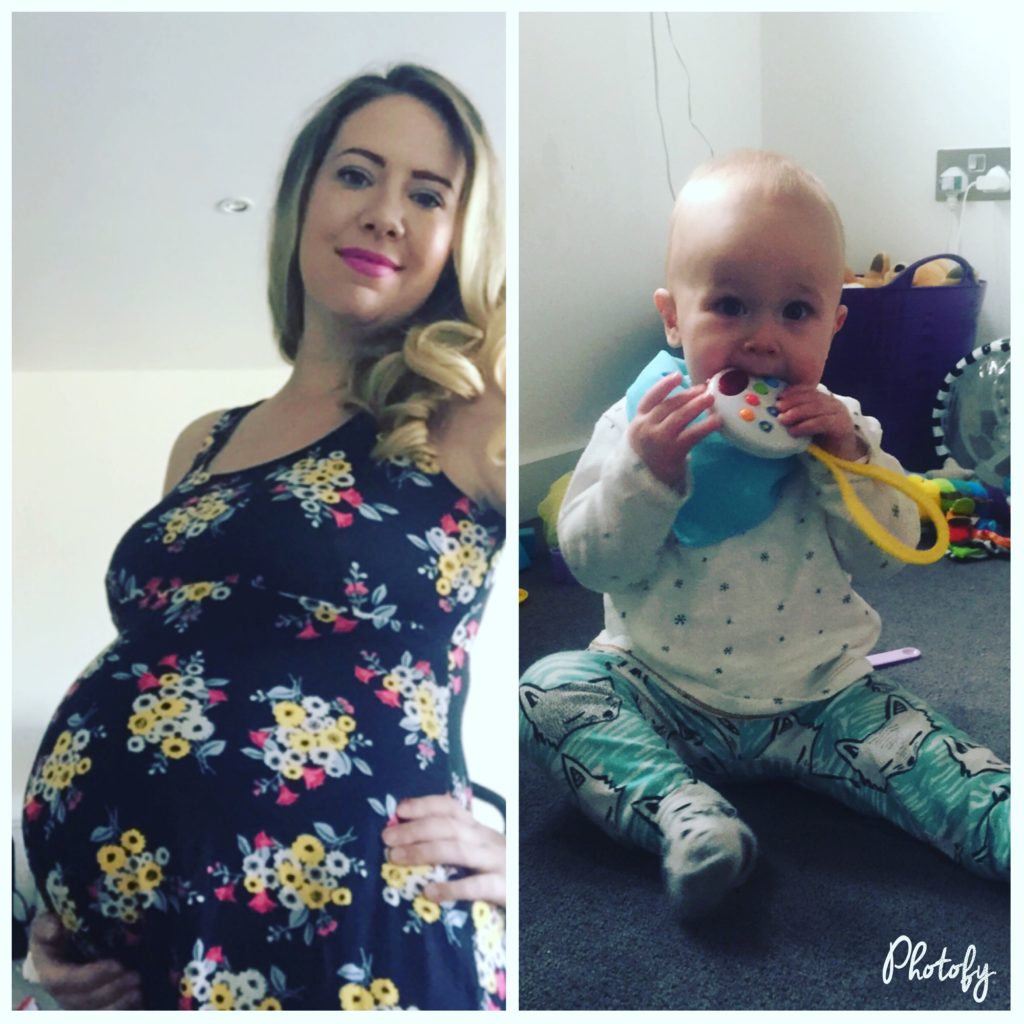 Not much has changed since then. He still flaps his arms and bounces up and down on his legs on a daily, hell, hourly basis. We have had so much fun this past month. Dexter has changed beyond all measure. Every single day he becomes more and more his own person, with his own likes, dislikes, hates and loves.

Dexter is now rocking four teeth, his lower middle incisors and his upper lateral incisors. He is looking very vampire like when he smiles which is mega cute. I keep singing in my head All I want for Christmas is my two front teeth. I remember my Grandad used to sing that to me when I lost my baby teeth.

We are on three meals a day and have started introducing desserts as a separate course instead of just offering a bit of fruit alongside the meal. I am becoming a bit more relaxed about what he is eating and have introduced pouches for him to suck on himself. This makes dessert a lot easier and a lot less messy. Sometimes I offer a pouch as a main meal and then give fruit or yoghurt for dessert. I received some critisism on a baby led weaning group for offering dessert, however I believe babies and young children need the calories and as long as it’s healthy it is not a problem. I believe obesity problems come from sitting infront of the TV munching away on bags and bags of crisps/chocolate not from having a healthy dessert such as fruit, rice pudding or a slice of sugar free cake.

Dex is back to five bottles a day at the moment. One first thing, one before lunch, one in the mid afternoon, one before bed and then he has been waking for another anytime between 8pm and 4am. That’s been quite hard to swallow, but we are getting on with it the best we can. He is drinking between 5 and 7oz at each feed.

He is mostly wearing 9-12 month stuff now. He still squeezes into a few 6-9 month tops but trousers have to be the larger size. We got lots of new clothes this month from Asda: sleepsuits, pyjamas, trousers and vests, all in 9-12 and 12-18 months. I love shopping for baby clothes and let me tell you there is nothing cuter than a baby in pyjamas!! 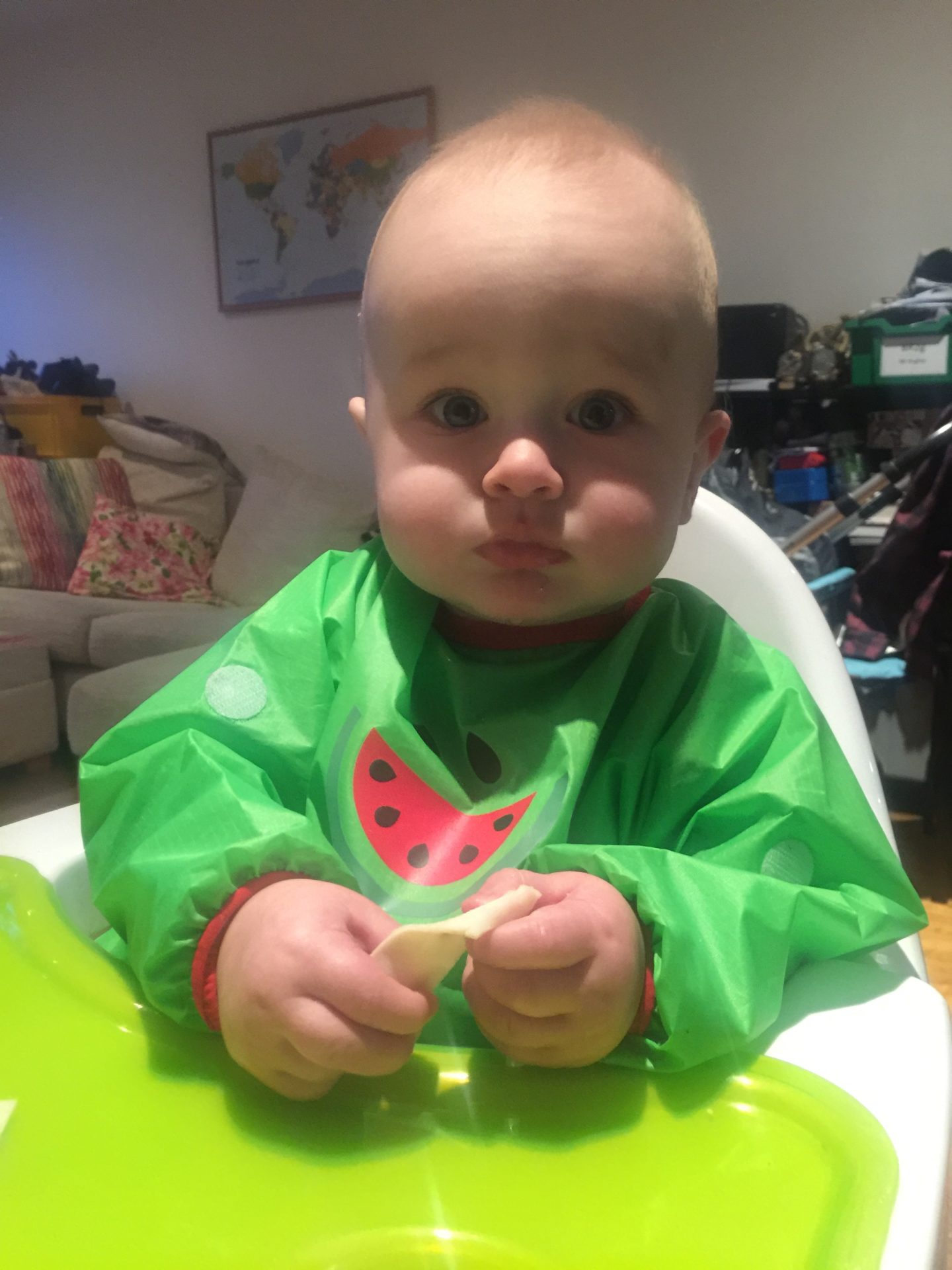 This month has seen the start of a bit of separation anxiety. He is fine for me to leave him with other people (thank God!) but when I try to leave the room, all hell breaks loose. I try to reassure him the best I can, but he cries until I reappear. He is still hugely scared of the hoover and black bin liners. If I try to hoover near him, he shakes with fear, cries and screams until it is all over.

We have also hit a sleep regression. Naptimes have become a bit of a nightmare. Most days he is only having one nap which can make life hard when you are used to two, but we are battling through.

He seems a lot calmer within himself these days. When he first learnt to crawl he wanted to be everywhere and it was hard work. Now, we can spend thirty minutes in bed and he will crawl over to the window, have a look, sit back down and look at me, bounce on the pillow and I don’t need to worry he’s going to go diving off the bed. I’ve also set up his travel cot in the lounge as a sort of playpen and filled it with toys. He will spend an hour a day quite happily playing in there.

We have noticed he has started copying us. If we cough, he will cough too. Neil even thinks he is trying to blow kisses when we blow kisses to him. He can pull himself to standing with no problem whatsoever and does it repeatedly in his cot. He crawls, gets himself into a sitting position, stands up and does a lot of downward facing dog yoga poses. He lifts his arms up when he wants picking up which makes life on my back so much easier! No more bending down to pick him up from his cot, he stands up and lifts his arms up to me now.

I can’t believe how quickly time is passing by. It’s been another wonderful month having Dexter here to brighten our days. He is such an amazing little character and we are really seeing his little personality shine through now.

I can’t wait to update you all again next month. Who knows what new skills he will have picked up!

You can read previous updates here.

I can't believe you got criticised for offering dessert! Really?! People judge the strangest things. Neve looks like she's going to be a mini vampire with her teeth too! My eldest was always in slightly smaller clothes - at 3,.5 years she is now wearing age 2-3!!! Thanks for linking up #LittleLeaps

So lovely to have a monthly record like this, as it's so easy to forget. I can't remember already how old my 11 month was when he started pulling up! Love his outfits too, what a stylish dude. Hope the naps improve soon!#littleleaps

He's doing so well! I love a baby in pajamas too - although Dex looks super cute in his little leggings #littleleaps

He looks like he is doing really well, congratulations to you! The time goes so fast doesn't it.

We have those bear trousers too - so cute! And I absolutely agree about moderation - for me we do a combination blw and mush as I want to make sure they eat enough as well as have the opportunity to explore food.