Today we made our first trip for a meal out as a family since Dexter started weaning. I’ve been promising to take my husband for a Pizza Hut buffet lunch for months now, and I couldn’t put him off much longer. Dexter is now 7 months old and has been baby led weaning for a month.

I have to admit, I was dreading it a bit. These are the worries that sped through my mind:

I knew preparation was key, so I packed his plastic bib, his Nuby Sure Grip mat and a change of clothes. 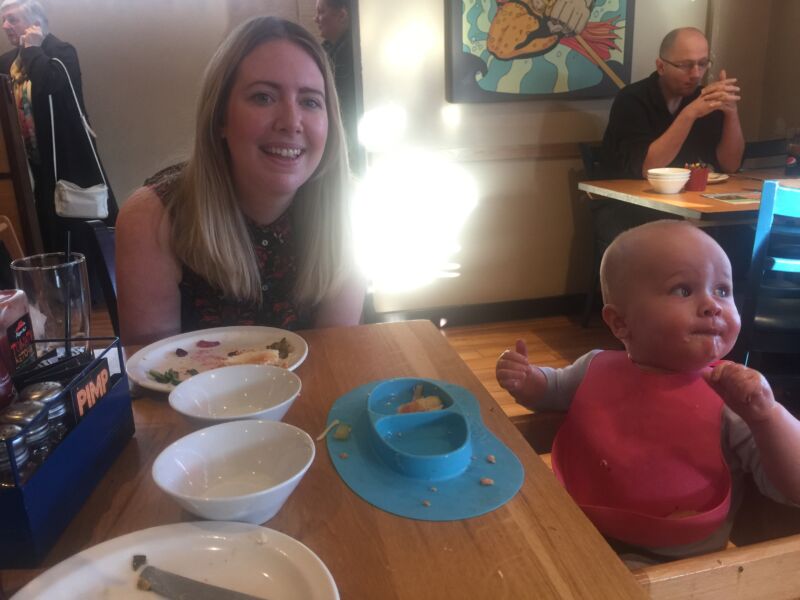 I was so pleased that the restaurant was pretty empty when we arrived. We left his car seat in the car and carried him in which saved a lot of space. The girl who greeted us at the door was great. She sorted us out a highchair and offered us a colouring book. We strapped Dex in and ordered our food and drinks.

Dex was as happy as Larry in his highchair. He loved watching the waitresses as they moved around the restaurant and he kept smiling at them. He’s such a flirt! I went up to get some food and picked a few bits for Dexter. There was a lot of choice suitable for Dex: penne pasta, garlic bread sticks, cous cous, cucumber and breadsticks. I put a few pieces of pasta in his tray which he devoured immediately so I went back with my salad bowl and filled it up for him. He had a try of everything I offered him, plus a bit of Daddy’s pizza. He sucked the cheese and tomato off the pizza and spat the base out.

Two people came over to the table. The first was attracted by Dexter staring at her as she was getting ready to leave. She started saying “Are you enjoying that? Doesn’t look like it, there’s more on the floor than in your belly!” I had to laugh. Yeah, there were a few pieces of penne on the floor, but he had eaten so much more than he’d dropped. He’s like his Daddy when it comes to food. The second, older lady, came over and asked how old he was. I answered seven months and turned away, effectively ending the conversation. I hate having small talk with strangers!

Dexter ate and ate and I bet if I’d kept offering, he’d have kept eating. He loved sucking the garlic bread and kept reaching for bits off my plate.

The clean up wasn’t as bad as I’d thought. I’d taken his t-shirt off when we’d got there so he was only wearing a vest and pants and he had mainly avoided dropping stuff on his pants. I picked up the few pieces of pasta off the floor and wiped his hands down. I had brought a plastic bag to throw the plastic bib and sure stay mat in ready to clean at home

All in all, it was a very successful trip! I’m going to feel so much more confident from now on taking him out for food. It’s was so much fun watching him interact with other people and trying different bits of food. Now, we just need to decide where to go next! 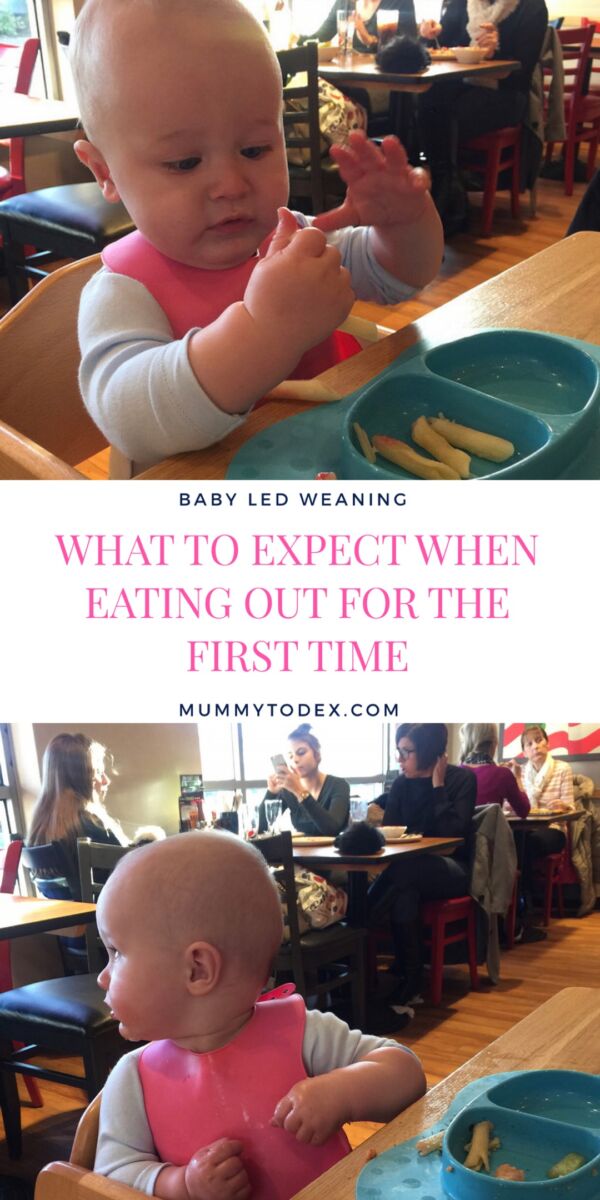