This month my first born turns 2.5 years old and I just cannot believe how quickly the past two and a half years have gone by. I did an update on Dexter’s progress and development every month until he was two and thought now that he is two and a half it would be a great time to do another one. This is Dexter’s 2.5 year old development update.

Since turning two, we have noticed such an improvement in his language skills. I also put this down to him spending an intensive six weeks with his Daddy over the summer, where the two of them spent practically every single day together one on one and my husband made a concerted effort to help him with numbers, shapes and colours. Dexter can now count to fourteen (he knows the other numbers up to twenty but not the correct number), knows a wide range of colours and is aware of lots of different shapes. He is a very polite little boy who says please and thank you the majority of the time and always says hello, goodbye and I love you. He is able to ask for exactly what he wants, whether that’s pens, food, a drink or for you to play a game with him; he knows lots of people’s names and asks about them regularly. He can sing songs quite well, making up the words he doesn’t know as he goes along, and particularly likes singing No More Monkeys Jumping On The Bed and Twinkle Twinkle. 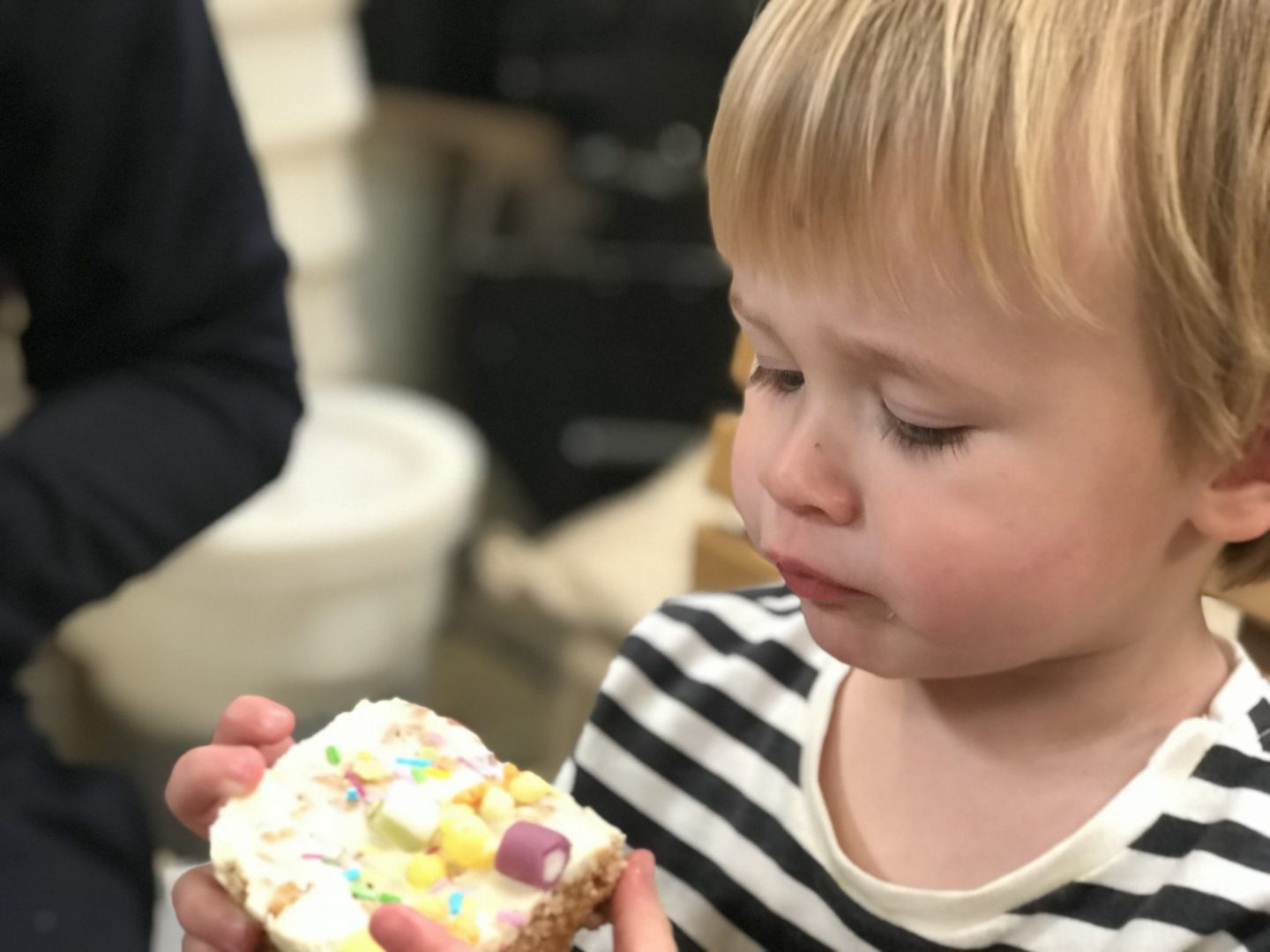 Sleep wise, he is sleeping really, really well. He has started to drop the odd nap here and there, which we often don’t mind as it means we can get out and about for longer without worrying he is going to become over tired. But then some days he will nap for three to four hours. It all depends on what sort of sleep he’s had during the week and what he’s been doing. He sleeps twelve hours every night from 6.30/7pm until the same time the next morning. Occasionally we get a lie in until 8am, but this is very rare. He still sleeps with a range of dummies and his bunny and he now sleeps in a toddler bed which he loves. Every night he goes to bed without a fight and climbs into bed himself, we then tuck him up with the duvet and he falls asleep within minutes. The next morning he stays in bed shouting one of us (usually me!) until we go in and say Good Morning. He then gets out of bed himself and tells us what he’s been dreaming about- usually cars or fireworks.

Eating has been tough over the past six months. We had a big change in routine when he turned two as he went to a different childcare provider for a couple of months who didn’t provide tea and weren’t that fussed on getting him to nap. It meant that when he got home he was starving, but often too overtired to be able to eat anything. It was quite a stressful time and we relied a lot on him eating toast, brioches, snack bars- anything that he could quickly get down him so we could get him to bed. Since being back at his usual childminder his eating has improved drastically. He is back to eating all his food at the childminder’s house (plus everyone else’s I’m led to believe) and he will have even more when he gets home- toast, pancakes, brioche, cookies, basically any snacky bits that are on offer. When he is with us he loves snacking on carrots and cucumber, drinking milk straight out of the carton, eating bowl after bowl of cereal (we now have a huge range which he chooses from- Coco Pops, Rice Krispies, Muesli, Granola, Coco Hoops and porridge) and will eat whatever we eat for tea whether that’s a gammon roast, spaghetti bolognese, curry or fish and chips. He loves helping himself from the fridge so I always have healthy snacky bits ready- otherwise he will just ask me for cake bars, cheesecake and cookies! 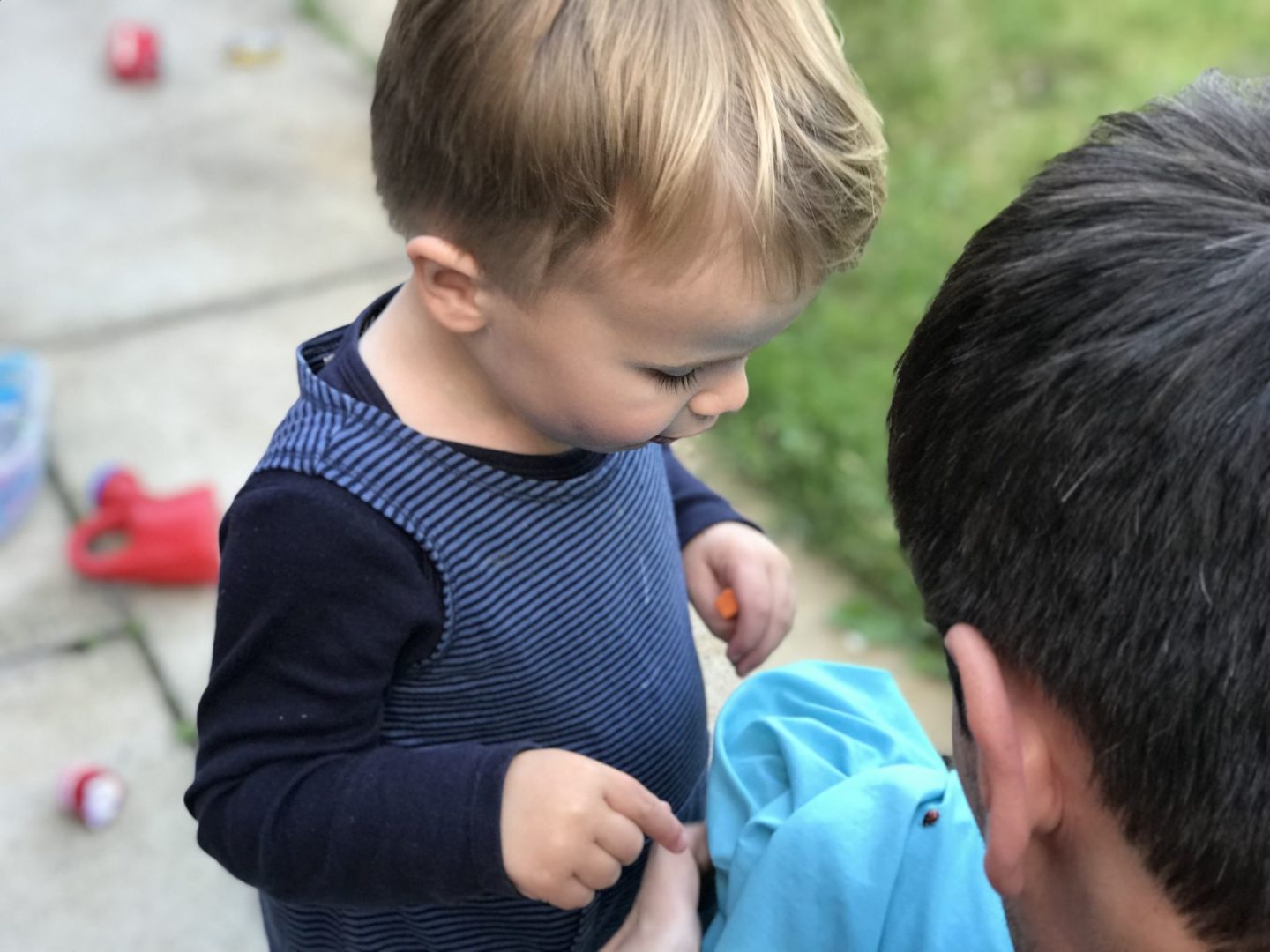 Dexter has really started to embrace imaginative play and loves playing shop with us. He likes to be the shop keeper who scans the products, takes our money and gives us our change, all while beaming with happiness and shouting, thank you, bye bye! He also loves playing with his cars (he must have hundreds now!), cleaning and fixing his bike (just like Daddy!) and collecting things from the garden. He also loves watching YouTube which we allow whenever he asks as he usually gets bored after twenty minutes or so and want to play with something else. We find that a don’t ask, don’t refuse system works well for us as refusing results in epic meltdowns and he seems to self regulate really well when it comes to screen time. He adores baking and helping out in the kitchen and will often role play baking a cake at his toy kitchen and also in the bath. he is obsessed with mixing and loves making a mess.

We moved house a few months ago which did not faze Dexter in the slightest. We talked about it lots before moving and brought him with us on every viewing (at the time I was thinking this is a bad idea- each and every time, but it actually worked out in our favour). He loves saying goodbye to Dexter’s house every morning and absolutely adores having much more space and a garden. 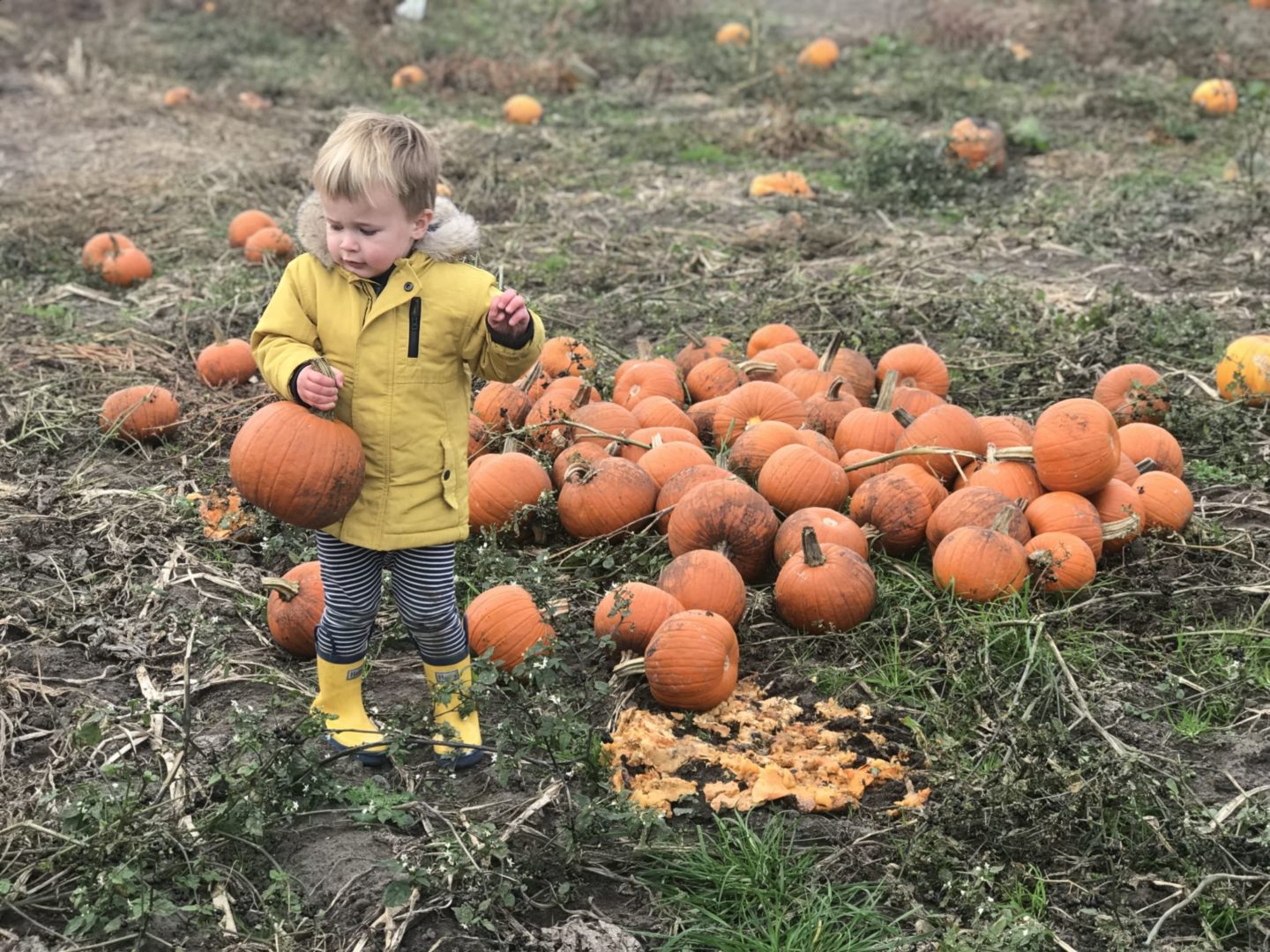 He is so much more aware of what is going on around him now and became slightly obsessed with Halloween and Bonfire Night. He loved seeing the pumpkins everywhere, but got a little scared of the monsters that came with it, although we reassure him regularly that there’s no such thing. He loved going trick or treating with his Dad and enjoyed watching the fireworks on Bonfire Night even more- although he was a little frightened at the time. We are now so excited for Christmas as we are realising this will be the first one where he is truly switched on to what is happening.

He still goes to his childminder four times a week and loves it. He adores all the day trips they go on, especially Martin Mere and Jollie’s Barn and loves his little friends there. He is particularly obsessed with one little boy there and everytime someone comes to our front door he asks if it is him. I really should arrange a play date! 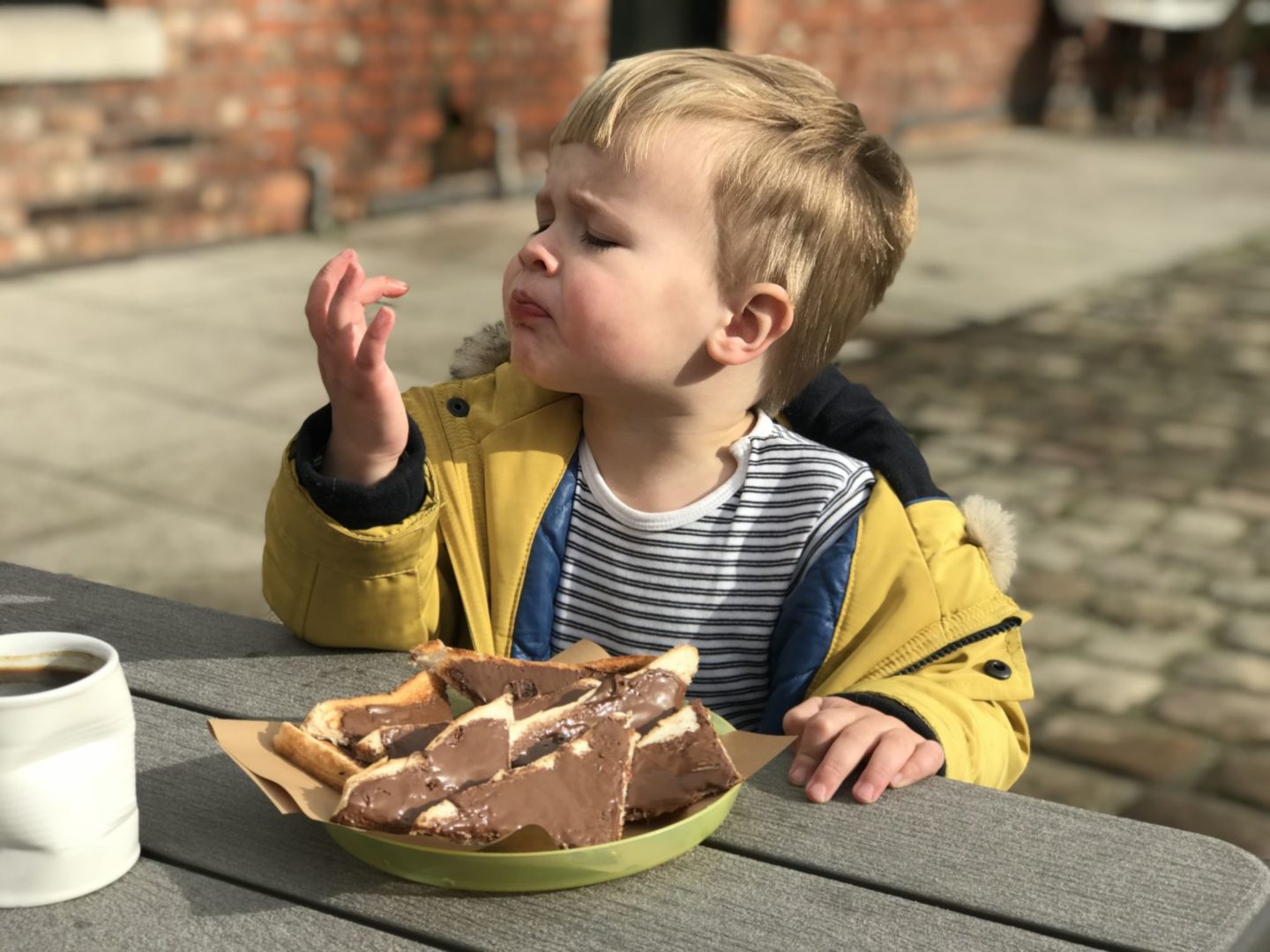 We rarely use the pram when we go anywhere as he much prefers to walk (or be carried when he gets tired!) and we often walk into the village (or he runs ahead and then back again multiple times- no wonder he needs carrying at the end!) He also loves riding his toddlebike around the house and garden, although he’s not obsessed with taking it everywhere like he used to be- a meltdown would always ensue if he wasn’t allowed to bring it with him on every, single trip.

I think that’s pretty much it for now. It’s so fascinating to see him turning into a proper little boy, although some days he likes to refer to himself as the baby Dexter and asks me to carry him to bed or from the car into the childminder’s house. He still hates snuggling so I make the most of those opportunities when I can, even though I’m eight months pregnant! I’m so looking forward to what the next six months bring- hopefully more dancing, song, beaming smiles and a lovely new addition to our family.

Aw seems like both our toddlers are getting on so well , mad how they’ve come on and so much has changed with my 2

Isn't it amazing how their language just suddenly seems to explode? I can't wait to see how Dex gets on as a big brother, he's going to LOVE it!!