What is the 9 Month Sleep Regression?

I hadn’t heard about it until we started having some sleep problems over the past few weeks and I googled ‘sleep at 9 months’. Turns out unsettled sleep is very common around this age.

Just like at four months old, there is a heck of a lot of brain development going on at this age. Baby may be starting to pull himself up as well and he probably is starting to feel a little bit of FOMO (Fear of Missing Out)

This regression can start anywhere from between 8 months and 10 months old. You can find out even more information if you google 8/9/10 month sleep regression.

I first noticed a change in Dexter’s sleep pattern around two weeks ago when he started waking in the evening for a bottle. I put it down to a growth spurt and didn’t think anything of offering him a bottle to settle him back to sleep.

Last week he started waking in the middle of the night as well. Again, only a bottle would settle him back to sleep. This time I blamed teething. He had a fourth tooth about to cut through and I assumed he was in a lot of pain which milk would soothe. 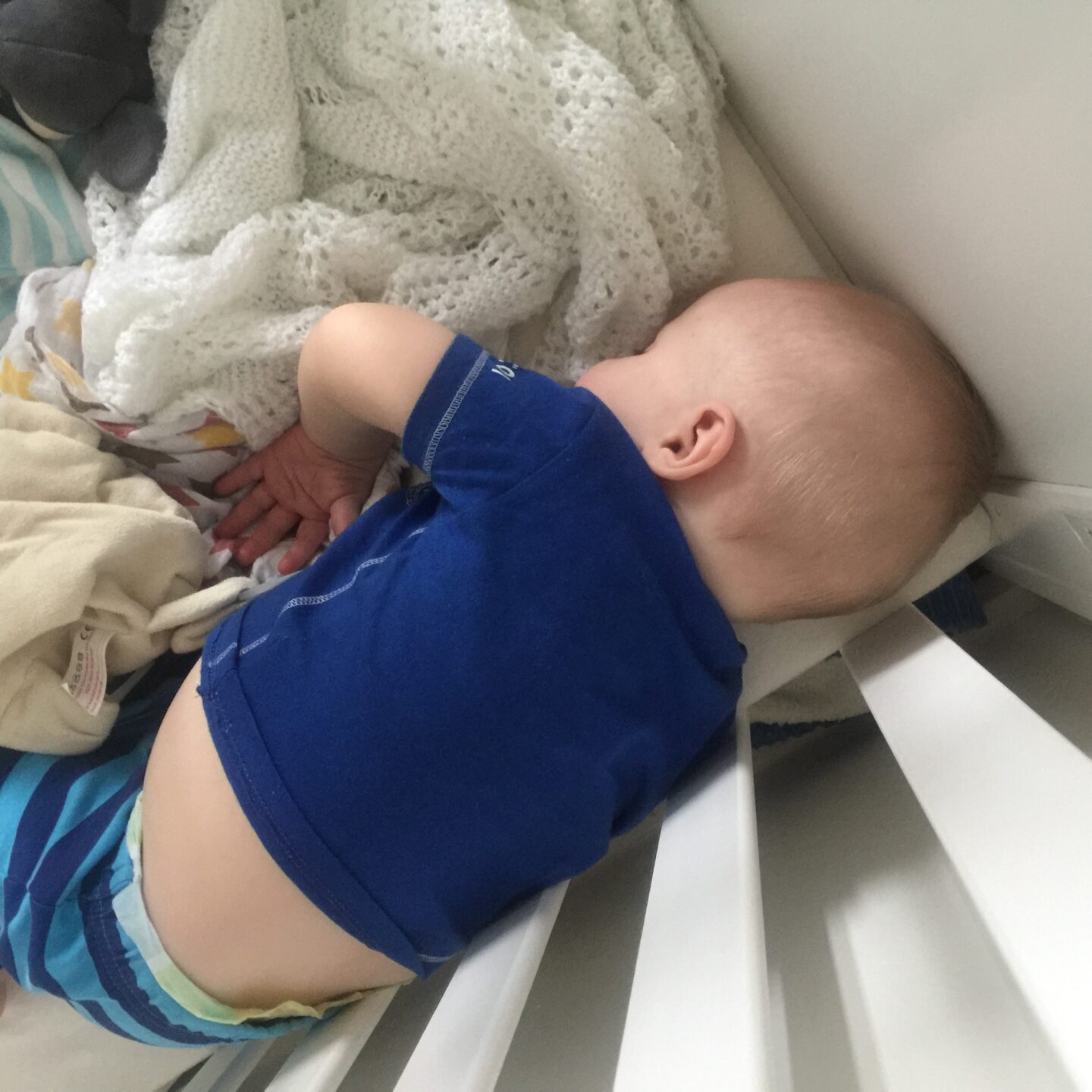 This week he has started to fight his naptimes and bedtimes. Dexter has always been an excellent sleeper. All you need to do is to look out for his sleepy cues, place him in his cot and off he goes to sleep. Not anymore. This past week I have noticed him yawning or rubbing his eyes, gone to put him in the cot which has resulted in a screaming, tearful baby.

I have tried leaving him to cry for a few minutes but he gets louder and louder, starts sweating and bangs his head against the cot. I try giving him a cuddle to soothe him, which works to stop his crying, but as soon as I put him anywhere near the cot he starts crying again. I’ve tried offering milk to soothe him but he pushes it away. I’ve tried offering Calpol and Baby Neurofen thinking he has got sore gums but obviously it doesn’t work. It’s been quite a challenging few weeks.

According to Google, this sleep regression occurs because babies are learning so many new skills and starting to understand the world around them, that they find it extremely difficult to switch off to go to sleep; a bit like me when I have a big project on at work the next day. Sources estimate that this regression lasts around six weeks, which can feel like the longest time when you are not getting any sleep, but hopefully we are now half way through it.

How Can We Get Through It?

Tips include limiting all stimulating items in the cot and ensuring the room is pitch black so nothing around him can stimulate him. They also recommend he sleeps in a sleeping bag to limit movement. His biggest trick at the moment is pulling himself up on the cot bars and sitting up in his cot. Although a sleeping bag won’t stop it, it should make it slightly more difficult. 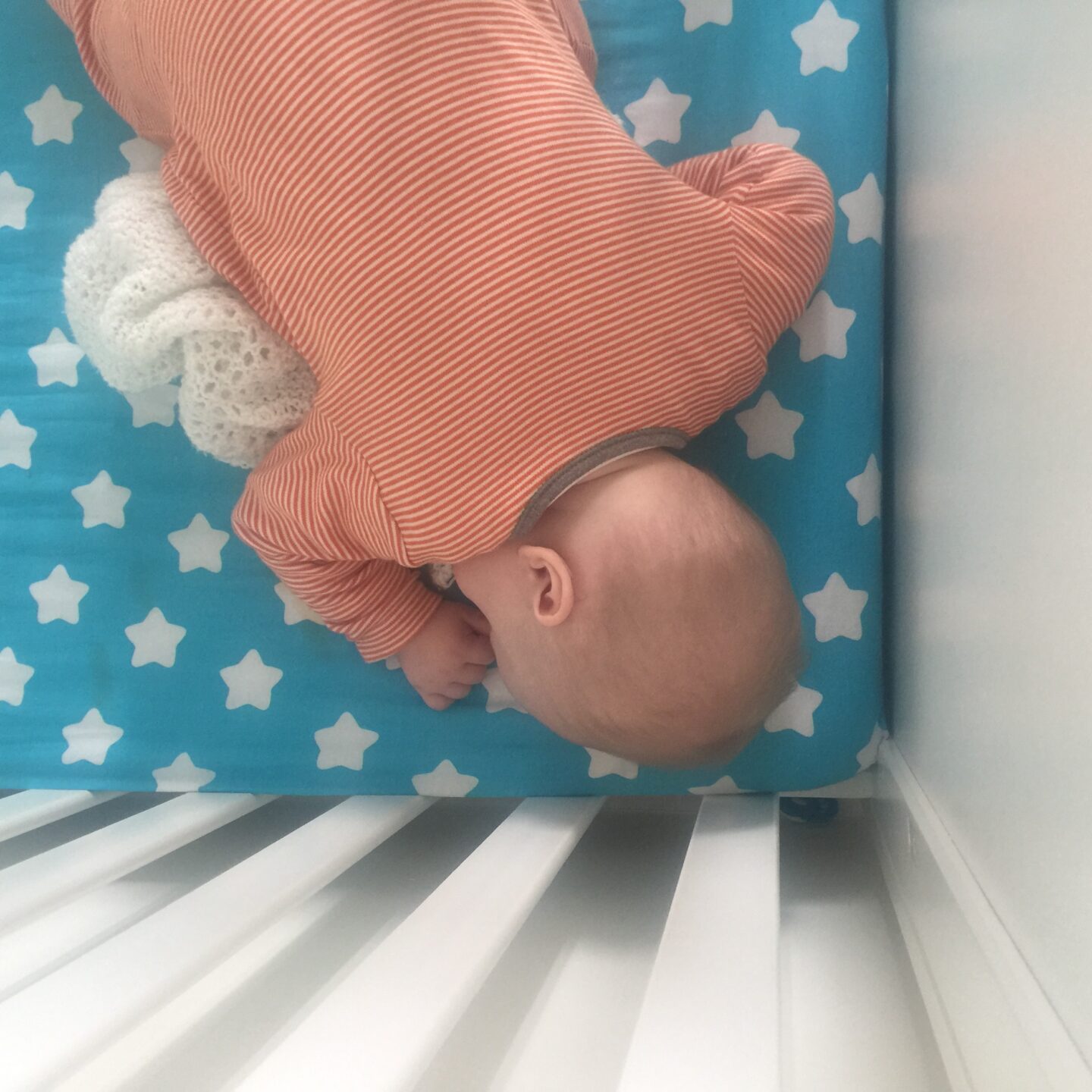 Above all, the sources recommend we avoid creating bad habits, as this regression won’t last forever. Therefore I am going to avoid giving milk if possible if he wakes in the night; I am not going to rock him to sleep and I’m not going to sit in his room while he falls asleep. Don’t get me wrong, I am not going to leave him to cry, that’s just not my style, but at the same time I don’t want him to start to depend on me for sleep, when we have done so very well up to this point.

There is nothing worse than a screaming, crying baby who you can see is extremely tired, but cannot go to sleep. Send lots of coffee and positive vibes please mamas!

*Update* – Dexter is now 3 years old and we got through the 9 month sleep regression, plus another one at 18 months. We invested in black out blinds for his rooms which helped and we did everything we could to help him to sleep. I am pleased to report that after four LONG weeks, he started sleeping well again and does so until this day. Even now at 3 years old he will sleep 12 hours a night and have a 2-3 hour nap each day. Keep going Mamas, the 9 month sleep regression sucks, but it won’t last forever!

Have you suffered with the 9 month sleep regression? How did you cope? Any tips for a new mum?

Check out weebeedreaming and thebabysleepsite for more tips and advice on how to handle baby’s sleep.

My daughter is 9 months Monday and has just started whinging through the night we co sleep as it's the easiest thing for us as we're breastfeeding but it's really difficult at the moment I was also blaming her teeth because she's had a temp and continuous cold for a month! Hopefully it will pass for us both soon x

I've found that the night times have been fine but we've completely dropped daytime naps in the last couple of weeks (8.5 - 9 months). He's exactly the same as how you've described Dex, literally the only nap time we now get is in the car. I've tried letting him cry, getting him to sleep first, putting him down very sleepy.. nothing works! Instead I've found myself strapping him into the pram or the car in order to get him to snooze - I think he's just terrified of missing out!

Logan's sleep has been disturbed ever since he started teething and sitting up. But I've got to say, lately he's been a little star and so easy to put to sleep and doesn't wake multiple times for like he used to. Now he just wakes for his dummy. Last night he's slept from 7pm until 8am so I'm pretty happy with that.