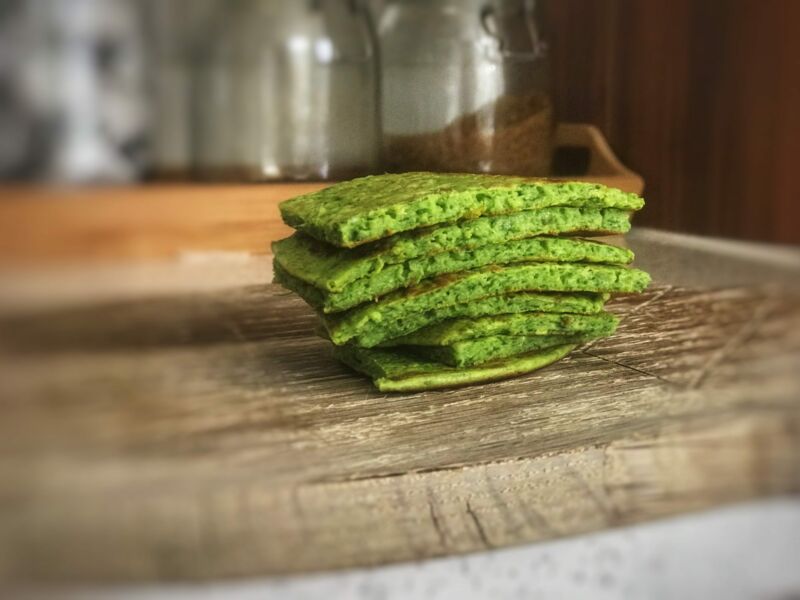 When I originally wrote this recipe, Felix was on his third week of baby led weaning and after a difficult start, i was pleased that it was getting a lot easier. After a couple of weeks of him being totally disinterested in food, he suddenly became a baby who was willing to try anything – and nothing has changed since. These spinach pancakes for babies have remained a firm favourite throughout the last two years.

I am a huge fan of baby led weaning pancakes as I think they’re such an easy food to prepare and make and super versatile too. Keep reading for the simple baby spinach pancake recipe, which can be used to create huge pancakes or tiny ones perfect for little fingers!

With Dexter we tried sweet potato pancakes, banana pancakes, beetroot pancakes, baked pancakes and good old scotch pancakes. These days at three years old, he’s more of a fan of chocolate pancakes, but the baby is not quite that lucky…he’s stuck with spinach pancakes!

But guess what, they actually taste yummy and I bet nobody would even guess there’s spinach in them, apart from the colour!

Baby led weaning spinach pancakes are so quick and simple to make and only require ingredients you’ve got stocked in your fridge/cupboard. They take less than five minutes to prepare and a few minutes each to cook. As usual I like to batch make a few so I’ve got a few left for tomorrow, but usually they all end up getting eaten anyway! They’re that delicious!

What blender do I use?

I use a Kenwood 3-1 blender which comes with three different parts to make blending easier than ever!

What I love about this recipe is the pancakes created can either make huge pancakes or mini ones. The batter is lovely, thick and gloopy so you can make whatever size pancake your heart desires!

With both my boys, I liked offering mini pancakes to begin with, before moving onto larger ones cut into strips as they got older.

Let me know if you try these baby led weaning spinach pancakes and what baby thought of them. Felix demolished a whole one within ten minutes and started banging on the high chair for more!

Word of warning though, these are messy! I really should have thought harder about dressing him in white before offering him these yummy pancakes. Oops!

Luckily now as a toddler, he is a lot less messy when it comes to eating these delicious baby spinach pancakes!