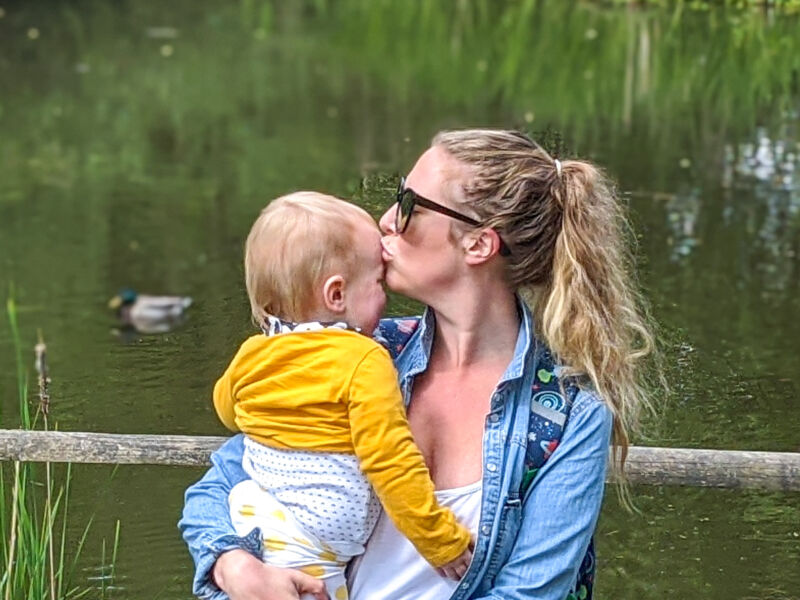 We have just come out of the other side of leap 9 and my golly gosh, that was a hard one!

With Dexter, all of the mental leaps felt intense, however on the whole with Felix, we have been left relatively unscathed. We had a pretty bad leap 4 at four months old, but since then, all good – until now!

I am sure being in lockdown and having absolutely no childcare didn’t help, but this is our story of Wonder Weeks leap 9 with our second born.

If you’re going through this leap with your baby right now, read on to find out what to expect and how to handle the emotions and battles of leap 9!

What are The Wonder Weeks Leaps?

Incase you were wondering, The Wonder Weeks is a book and an app revered by Mums all over the globe, because it finally gives us an insight into our baby’s fussy periods and helps to understand how we can better help them to learn, develop and begin to understand the world around them.

The Wonder Weeks is a worldwide best seller detailing the mental development of babies. Wondering why your baby suddenly seems fussy or doesn’t want to sleep after weeks of being content? Then consult The Wonder Weeks app by inputting your baby’s due date and you’ll have all the information to hand at the touch of a button.

Some people think mental leaps are a load of woo, but I disagree. The app has been spot on for both my boys and has given me incredible peace of mind when I’ve thought I was parenting wrong, only to discover they are ‘leaping’ and after a few days/weeks, everything is back to normal…for now.

Buy The Wonder Weeks book on Amazon: Available as paperback or Kindle!

What is Leap 9 and What Have We Been Experiencing?

Wonder Weeks Leap 9 is the World of Principles and lasts on average for four to six weeks. The problem with these leaps is – they just keep getting longer and longer!

Leaps are great for all the cool stuff they are learning and suddenly able to do, but boy, it’s bad for all the not-so-cool stuff like the moaning, whining and minor temper tantrums!

We experienced a mixture of both cool and not-so-cool stuff such as:

For my husband, who has been doing the brunt of childcare during quarantine, leap 9 has been an absolute nightmare. It’s been quite hilarious from my perspective to see him having to cope with a leap after doing it pretty much alone for the first 12 months of both Dexter’s and Felix’s life. That’s one bonus of the pandemic lockdown – Neil has really got to see what its like being at home with the kids all day long!

The arguments between Felix and his older brother really intensified during this period too. Whatever Dexter had, Felix HAD to have it – no matter what it was. Mediating between two locked down children was really difficult, but trying to get Dexter on side by teaching him coping strategies to deal with a fire haired little demon trying to get his toy really helped.

As with all other leaps, it’s so important to remember that ‘this too shall pass‘.

Leaps don’t last forever and the skills that your baby picks up during this time way outdo the negatives that come along with it.

We were very lucky that Felix’s sleep wasn’t disturbed during this leap – he continued to sleep through the night and have a decent nap during the day – lifesaving hours for my husband who was desperate to get a break from the whining and moaning!

I am not saying let them rule the roost, but we are firm believers in baby and child led parenting and pretty much letting baby decide, within reason, what they want to do. If your baby wants to explore outdoors – why not? If they desperately crave comfort in your arms for hours at a time – do it. They’re only little once and those cuddles are so, so fleeting!

It’s important to stimulate your baby with lots of games, stories and baby activities, especially during a leap. You will find that they’ll be much more content if you sit and play Duplo, Brio or read a book together.

Felix especially liked going for short walks in his new shoes and exploring his world which had suddenly got a heck of a lot bigger! Find free online printables and go on a scavenger hunt, go and feed the ducks and practise quacking, build tall towers with soft blocks and watch your baby knock it over and repeat an infinite amount of times. Let them help you (badly) to hang out the washing.

The activity isn’t necessarily important. What is important is the fact they’re with you, practising language and seeing how the world works.

Decide on your boundaries and stick to them

Child led parenting isn’t about your baby having his own way all the time, there have to be boundaries. What your boundaries are will depend on your family dynamic, but decide on what they are and stick to them.

Your baby is learning now about what is right and wrong and by letting them know now firmly that something is not okay, will put you in good stead for the difficult months that will follow this leap as they hurtle toward becoming two years old.

Being told he can’t have his brother’s toy would result in an epic meltdown that told us his world was coming to an end. We were always there for him during this moments, softly soothing, empathetically telling him that we understood his plight, but unfortunately that toy was not his and perhaps he’d like something else.

This process worked really well when raising our eldest child who, on the whole, is okay with being told no thanks to years of consistency.

If your baby is driving you insane with their incessant whining, take a few breaths, leave the room if needs be and try to remember that this won’t last forever. It doesn’t make you a bad Mum (or Dad!) if you find yourself exasperated by the constant high pitched moaning – you’re only human!

Take time to fill your cup when baby is sleeping – whether that’s a nice long bath, a face mask, a brisk walk or reading a book. Leaps are bloody hard and you need to take time for you too.

Buy The Wonder Weeks book on Amazon: Available as paperback or Kindle!

What’s Next in the World of Leaps?

Leap 10 is next on the cards which starts just before your baby turns 18 months old (depending on when they arrived in comparison to their due date).

I can’t say I am particularly looking forward to this one, especially as there is sometimes a sleep regression around this age too! But until then, we are so happy to have our smiling and content baby back with all of his brand new skills!

The whining may have stopped for now, but we are left with a baby who is suddenly much more like a toddler – walking everywhere, exploring everything and definitely one who knows his own mind and isn’t afraid to tell us!

What was Wonder Weeks Leap 9 like for you and your baby? A breeze or did you struggle too? Let me know in the comments.