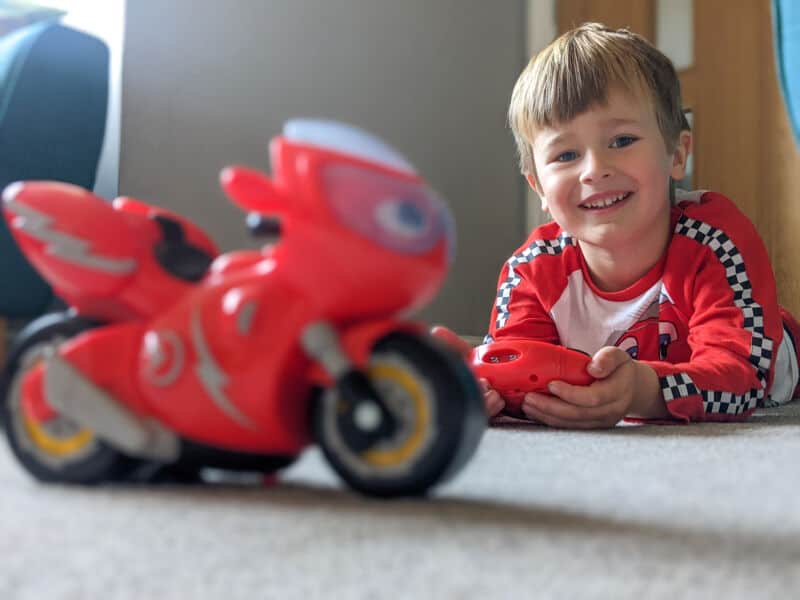 Ever since Ricky Zoom burst onto our screens in 2019, Dexter has been obsessed. Last Christmas we were given a special early preview of the Ricky Zoom Christmas Special and this year we have been lucky enough to be sent an RC Turbo Trick Ricky and an assortment of Core Racers and Vehicle and Action Accessories to review. Christmas has well and truly come early!

What is Ricky Zoom?

Ricky Zoom is a little red rescue bike who loves to go fast! A loyal friend and natural leader, Ricky is the confident head of the Bike Buddies who love to race around the sports race and try new stunts at the Adventure Park.

The programme is set in the town of Wheelford where the Bike Buddies go on many adventures and use their resourcefulness and problem solving skills to overcome the challenges they face. Ricky dreams of becoming a rescue bike just like his parents, who are always there to support him if he gets himself in a sticky situation!

Is your little one just as mad on Ricky Zoom as Dexter is? Then these toys will make the perfect Christmas or birthday present. We were sent a collection of toys to review, including the RC Turbo Trick Ricky, Ricky Zoom Core Racer and Scootio Vehicle and Accessory.

The remote controlled Turbo Trick Ricky is a fab toy for kids aged 3+ who are Ricky Zoom obsessed!

Your children will love to make Ricky perform daring tricks with the press of a button on the remote control.

What does the RC Turbo Trick Ricky do?

The remote controlled Ricky Zoom does real wheelies and 360 degree stunt spins and works on carpet as well as solid flooring.

Perfect for children aged 3+, the RC Turbo Trick Ricky has an easy to use controller that even my two year old could easily use.

What do we love about the RC Turbo Trick Ricky?

Dexter LOVED how Ricky could do wheelies and thought it was the coolest thing ever!

I was really impressed with how sturdy the toy is – it has a real quality feel to it and am even happier with the how long the battery life lasts. Usually we are having to replace batteries in remote control toys after a matter of days.

The RC Turbo Trick Ricky is the perfect toy to play together as a family. Dexter loved showing me the tricks Ricky could do under his control and the toddler enjoyed chasing Ricky around the room!

We were also sent a couple of extra toys – a Ricky Zoom Core Racer and a Scootio Vehicle and Action Accessory.

What do these Ricky Zoom toys do?

These Ricky Zoom motorcycle toys are ready to rev up imaginative play. With their expertly designed tyres, they can stand steady when stopped and the articulated front wheels allow them to steer which ever way you point them.

Both Dexter and Felix enjoyed playing with these toys. Scootio comes with a drone that can be shot from her handlebars!

Where can you buy these incredible Ricky Zoom toys?

All of these Ricky Zoom toys are available from The Entertainer!

As we head towards Christmas, as well as spending time with our loved ones it is also a chance to think of people less fortunate than ourselves. This is why Ricky Zoom is once again supporting leading children’s charity Barnardos this Christmas with its Barnardo’s Kidsmas Toddle with Ricky Zoom.

There is nothing more incredible than children helping to support other children who need their help.

Visit https://www.barnardos.org.uk/kidsmas for more details on this Zoomtastic fun event.

How can you watch Ricky Zoom?

Watch Ricky Zoom weekdays at 7.40am on Milkshake on Channel 5!